Two new films remind us that the experiences of U.S. Jews don’t often get the Hollywood treatment. When they do, depictions range from shticky to subtle. 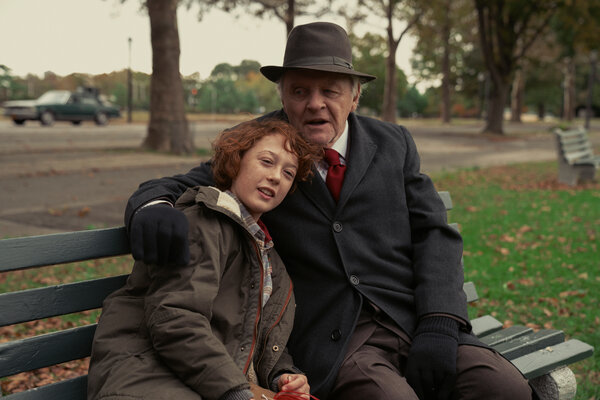 In James Gray’s recent drama “Armageddon Time,” a Jewish family from Queens goes to see “Private Benjamin.” That 1980 comedy stars Goldie Hawn as a woman whose husband dies during coitus on their wedding night. To deal with her grief, she joins the Army. Hilarity ensues when she realizes she’s going to have to get her perfectly manicured nails dirty.

“Private Benjamin” (directed by Howard Zieff) is not primarily thought of as a Jewish movie, but the characters in “Armageddon Time” immediately identify it as such, marking Judy Benjamin, who married in a ceremony complete with a rabbi and glass-stomping, as a Jewish American Princess. “She was a JAP, but she grew up,” the Graff matriarch says as they leave the theater. Still, it’s not as if “Private Benjamin” really wrestles with what it’s like to be a Jew in America. Judy encounters no antisemitism in the Army. Her faith is defined by her desire to marry a nice Jewish man.

By contrast, in “Armageddon Time,” the Graffs’ Judaism is essential to the story Gray is telling about his childhood in Queens. The family is in a culturally liminal space: white but not white enough for the Trumps, the borough’s ruling class in the early 1980s, and yet still privileged enough to perpetuate anti-Black oppression on their way to assimilation.

Gray is not the only filmmaker telling a specifically Jewish story this season. Steven Spielberg tackles his own Jewish upbringing in “The Fabelmans.” Co-written with Tony Kushner, the lightly fictionalized film tracks Spielberg’s parents’ divorce and his own artistic development.

As a secular American Jew, I felt a flash of familiarity watching these films, similar to what the Graffs must have felt seeing Judy Benjamin’s wedding. Growing up, I mostly expected to see Jews onscreen in the seemingly ever-present Holocaust movie, important stories that were nonetheless rooted in Jewish suffering, or in European-set movies like “Fiddler on the Roof” or “Yentl.” Far less common were depictions of American Jews like me.

“Armageddon Time” and “The Fabelmans” are new entries in what I’ve come to think of as a slim canon of movies that depict and explore American Jewish life. In these movies, the character’s faith is not incidental but somehow central to the narrative, be that in matters of religion or, more commonly, the cultural space they occupy.

It’s an imperfect canon that provokes more questions than it provides answers. Does the Catskills-set “Dirty Dancing” belong, even if Baby’s family is only coded as Jewish? What about the comedies of Mel Brooks wherein the humor is specifically Jewish, if not the subject matter? For my purposes, which are in no way comprehensive, I’m more interested in movies that are explicitly Jewish, ones that acknowledge and depict their characters’ backgrounds and traditions while placing them in the context of the American landscape.

WHEN I SAT DOWN for coffee with James Gray on a November morning in New York, he acknowledged, “The Jewish experience in the United States has been very poorly covered by movies.”

There’s a historical reason for this. As the author Eric A. Goldman wrote in “The American Jewish Story Through Cinema,” Jewish producers reacted to Hitler’s assumption of power in the 1930s by shying away from depicting their own onscreen so as not to draw attention to themselves. In 1927, the first full-length talkie, “The Jazz Singer,” centered on a Jewish man (Al Jolson) who didn’t want to be a cantor. Just a few years later, “clearly identified Jews abruptly disappeared from American cinema,” according to the book.

They, of course, weren’t gone forever. Postwar Hollywood tackled the issue of antisemitism — from a goyish viewpoint — in films like “Gentleman’s Agreement,” in which Gregory Peck played a journalist posing as a Jew to root out bigotry. And by the ’60s and ’70s, there were movie stars like Barbra Streisand who were explicitly, proudly, Jewish. (“Who’s an American beauty rose with an American beauty nose,” she sang in “Funny Girl,” the musical about another Jewish artist, Fanny Brice.)

Filmmakers like Woody Allen and Mel Brooks made their Jewishness part of their identity onscreen, even if it could feel ancillary to their plots. In “Annie Hall” (1977), for instance, Allen’s heritage is what makes him feel ill at ease around Diane Keaton’s eponymous WASP. At a dinner with her uptight family, he imagines himself through the eyes of her Grammy. In a cutaway joke he looks like a Hasidic rabbi with a beard and side curls. Years later, in “Robin Hood: Men in Tights” (1993), Brooks donned the payos to play Rabbi Tuckman, a joke about Friar Tuck. Jewishness was part of the schtick.

Compare the Judaism in “Annie Hall” — which comes with a heavy dose of self-loathing — to that in Joan Micklin Silver’s romantic comedy, “Crossing Delancey.” Like most stories of American Jews, it trades in assimilation. Her earlier film, “Hester Street” (1975), was a classic immigration story about a late-19th-century woman (Carol Kane) who arrives in New York from Eastern Europe to find that her unfaithful husband wants her to shake off her old-country ways. In the contemporary “Crossing Delancey” (1988), the questions of assimilation are more subtle. Amy Irving plays Isabelle Grossman, a bookseller whose bubbe on the Lower East Side turns to a matchmaker to find love for her granddaughter. The matchmaker sets Isabelle’s sights on a charming pickle vendor (Peter Riegert). He’s a modern man yet somehow still connected to a version of a Jewish New York that has since disappeared, and despite her initial rejection of him, Isabelle ultimately falls into his arms. Here the characters’ heritage brings them together.

GROWING UP, Gray said, he resented a lot of portrayals of Jews in movies. “I always felt they were insanely clichéd or, may I say, did not resemble my own experience,” he said. “Now in some ways that’s dumb because the point of going to the movies or seeing any work of art has been grotesquely misunderstood now as some kind of narcissistic endeavor in which you’re supposed to see yourself in it, but the truth is the opposite. You’re supposed to see other people in it and understand other people’s experience.”

Gray cited “The Chosen” (1982), directed by Jeremy Kagan, as an example of the kind of movie that he rejected, even if he now thinks that dismissal was unfair. It’s an adaptation of Chaim Potok’s novel about the friendship between a Hasidic teen and a Modern Orthodox teen in 1940s Brooklyn, which fractures with their families’ divided opinions of the creation of an Israeli state.

“The Chosen,” in some ways, gets at what is tricky about the question of the representation of the American Jewish experience onscreen. Who are American Jews? Do they look like the families in “Armageddon Time” and “The Fabelmans,” who celebrate Hanukkah and eat bagels and lox but don’t go to shul regularly? Or are they ultrareligious as in “The Chosen” or the Yiddish-language “Menashe” (2017), a modern story about a father trying to maintain custody of his son following his wife’s death in an enclave of Brooklyn? And that’s not even to mention Jews of color, who are unlikely to appear on big screens. Rarely does a filmmaker choose to unpack the nuances between the Ashkenazi and Sephardic experiences of the diaspora.

Recently younger filmmakers have found threads of horror — or at least severe anxiety — in depictions of Jewish Americans and their traditions. The Safdie brothers’ “Uncut Gems” (2019) centers on a Diamond District jeweler (Adam Sandler) who’s addicted to sports betting. His misdeeds follow him to a Passover Seder, where he reads the story of the plagues that besiege the Egyptians, who have enslaved the Jewish people. In an interview with Variety, Josh Safdie noted the aptness of setting the movie around Passover, when “you’re supposed to derive much meaning from suffering, in a movie about a guy where your hero is enduring and suffering.”

Two years later, Emma Seligman — from Canada but working in the United States — made her debut with “Shiva Baby,” about a queer woman, Danielle, (Rachel Sennott), who occasionally does sex work and arrives at a shiva, the Jewish funeral ritual, to realize her sugar daddy is also there. Seligman mines tension from Danielle’s discomfort in this traditional environment filled with nosh and gossip. Her stress eventually translates to the audience, filling every frame with dread.

“Armageddon Time” and “The Fabelmans” are part of a different legacy, that of established directors unpacking their Jewish influences. Barry Levinson’s “Avalon” (1990) and “Liberty Heights” (1999) both grapple with the idea of the American dream through a specifically Jewish lens. “Avalon” is the saga of the Krichinskys, a sprawling clan striving in the postwar Baltimore of Levinson’s youth. It’s a movie largely about the promise of America, as experienced by one family over multiple generations. Levinson uses Thanksgiving dinners rather than Seders or Shabbats as set pieces, but the Krichinskys are also recognizably Jewish — in some ways stereotypical (the critical mother-in-law), in others honest (the Holocaust survivor relatives who arrive midway through the film).

“Liberty Heights,” set a short while later, looks at another Jewish family, the Kurtzmans, but is less insular. It occasionally, clumsily, explores a budding romance between their teenage son (Ben Foster) and a Black classmate (Rebekah Johnson) at his newly integrated school, unpacking the different variations of discrimination they encounter and the intolerance of their families.

The Coen brothers, true to form, go in a more philosophical direction, with their apocalyptic story of a Jewish professor in Minnesota, “A Serious Man” (2009). Opening with an anecdotal sequence featuring an evil spirit known as a dybbuk, the Coens couch their story — the existential quest of a schmuck (Michael Stuhlbarg), whose wife wants a ritual divorce known as a “get” — in folklore, though it’s set in 1967, uniting Jewish spirituality with a darkly comic look at Jewish existence in Middle America.

As for Gray and Spielberg, this is not the first time either director has made a film about Jews before. But their new dramas examine their own Jewish upbringings, even casting versions of themselves. To Goldman, it’s a sign of the times. “I think what you’re seeing is the change that we’ve been feeling since I would say 2015 and the sense of vulnerability that I would posit most American Jews did not feel prior to that,” he said in an interview. “I think that’s had a tremendous impact in terms of forcing artists in general, but filmmakers to look at themselves within a broad American society.”

In presenting similar-looking families about a generation apart, the two movies come to wildly different conclusions. Gray, an inherently more pessimistic filmmaker, indicts himself, viewing his nascent adolescence through the prism of a friendship between his stand-in, Paul (Banks Repeta), and a Black classmate, Johnny (Jaylin Webb).

Spielberg’s reaction to the antisemitism he encountered in his youth is messy but ultimately more hopeful. A teenage Sam Fabelman (Gabriel LaBelle) encounters bullies, but armed with a camera at Senior Ditch Day, he paints one of them as an Aryan dreamboat, a golden god. The jock is shaken. He doesn’t understand why Sam would do that, and Sam’s not so sure either, but Spielberg recognizes the power a camera has to change hearts with imagery.

Throughout his career Spielberg has constructed images that are synonymous with Americana — from Indiana Jones to suburban kids on bikes in “E.T.” In “The Fabelmans” he uses some of those same tricks. But the Fabelmans are not like every other all-American family. Their house is the only dark one on the block in New Jersey at Christmas time.