At 25, the indie writer, director and actor is making waves in Hollywood. His second feature, “Cha Cha Real Smooth,” could start a new career chapter.

LOS ANGELES — For a while, working behind the camera didn’t appeal much to Cooper Raiff.

“I never wanted to be a director,” he said. “When someone says they want to direct, I’m like, ‘Who do you think you are?’”

But at 25, the overachieving actor, writer, and, despite his prior sentiment, director, has made two bittersweet personal features that have garnered both critical and industry notice.

“I didn’t like the idea of directing because directors need to really bring everyone together and gain trust amongst the team and that’s not my comfort zone,” he said. “But I’m really good at making sure people want to be around me. I think it’s about me not wanting to be alone.”

Now Raiff has made a movie that people seem to want to spend time with, and where he confirmed his vocation. His sophomore effort, “Cha Cha Real Smooth,” won the audience award at the 2022 Sundance Film Festival and was bought for $15 million by Apple. That company shepherded a previous Sundance acquisition, “CODA,” to a best picture Oscar earlier this year.

A comedic coming-of-age drama, “Cha Cha Real Smooth” (in theaters and on Apple TV+) centers on Andrew (Raiff), a recent college graduate employed as a party starter for bar mitzvahs and involved in a flirtatious friendship with Domino (Dakota Johnson), a 30-something mother to an autistic teenager.

Sporting a dark green hoodie during a recent interview at a restaurant in the Westwood section of this city — casual attire in contrast with the establishment’s upscale ambience — Raiff exuded the same charming melancholy that permeates his work. 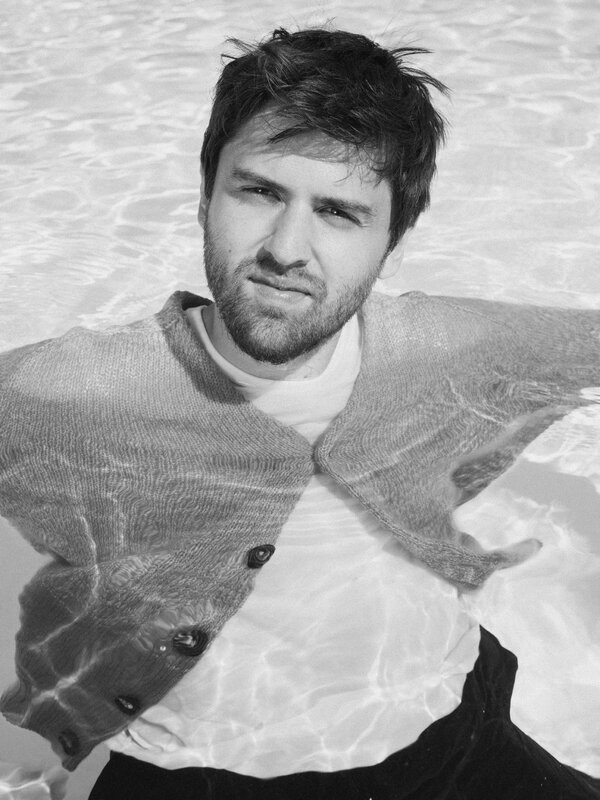 As he repeatedly ran his hands through his hair, the young storyteller spoke with an anxious eagerness to bypass small talk in favor of vulnerability.

“If you had asked me, ‘Where will you be when you’re 25?’ I think I would have said, ‘I hope I’m happy and doing what I want to be doing,’” Raiff said, adding, “There have been times this year where I’ve been viciously unhappy about certain things in my life. The two movies I’ve made were objectively successful because we made money on them, but being successful doesn’t help with my daddy issues. It doesn’t get me through the day.”

Before reluctantly finding himself calling the shots, the Dallas native spent many of his teen years in a local acting studio. Back then he hoped performing would become his main mode of engagement with moviemaking.

Writing only came into his purview as a senior in high school when a new theater teacher, Catherine Hopkins, encouraged him to do so, providing prompts and feedback until he completed and put on his first school play with her help.

“Bless her soul, she read some of the crappiest things ever,” Raiff said. “But she really helped me become a writer.” Hopkins, he recalled, had kind words to say about his feature debut, but he believes she secretly wishes her former pupil was a playwright instead.

Aching to break into the industry, Raiff moved to Los Angeles to attend Occidental College. Still set on an acting career, he attended casting calls regularly until one audition for a UCLA short film, which required a stereotypical Texas drawl, broke him. “That’s when I said, ‘I can’t do this anymore. It’s not good for my morale,’” he recalled.

Raiff then turned back to writing. He put together an entire season of an episodic series, which he still wishes to make someday, and sent it to every agent whose email he could find online. Not surprisingly, his unsolicited submission didn’t get any traction.

“I realized no one was going to read my stuff. That’s when, in my sophomore year of college during spring break, I made this crappy movie thinking people were more likely to watch something than read something,” he explained.

That amateur venture, titled “Madeline and Cooper,” with him and his girlfriend as the leads and shot with equipment borrowed from the university, followed the quotidian mishaps of a college freshman. A fan of the TV series “Togetherness,” Raiff tweeted at its co-creator, Jay Duplass, and dared him to watch his student project on YouTube.

“I said, ‘Bet you won’t click on this link and then email me after.’ He emailed me saying he’d won the bet and then we got lunch,” Raiff said. “I was at such a low point when I tweeted him because I had shown the movie to my parents, and they really didn’t like it.”

Duplass saw potential. “Within a couple of minutes, I could tell that his sensibilities about making films were very natural,” Duplass said in a phone interview. “There was an emotional maturity to it, which I think is really what characterizes Cooper’s work more than anything.”

For the next nine months, the two met regularly, as mentor and mentee, to polish Raiff’s “Madeline and Cooper” screenplay, as part of an informal crash course into independent, budget-efficient filmmaking. As the project took shape, Raiff pitched nearly a dozen directors to take over, but ultimately had to step into the role. That would mean not finishing college.

“I lied to my parents and I said, ‘Jay thinks it’s OK for me to drop out.’ That wasn’t true, but I was banking on us eventually making the movie. And we did, but dad wasn’t happy.”

The resulting movie, “Shithouse,” a professionally made version of his original student film, won the grand jury prize at the South by Southwest Film Festival in 2020 and sold to IFC Films. Given how inexpensively it was accomplished, Raiff earned a substantial amount of money, enough for his father to see his path as financially viable.

For “Cha Cha Real Smooth,” Raiff was against the idea of acting in his own movie again. But his producers at TeaTime Pictures, Dakota Johnson and Ro Donnelly, were certain no one else was better suited for the part. “He wrote Andrew for himself,” said Johnson by phone. “Then wanted someone else to play him, which can’t really happen.”

Unbeknown to the producing team, Raiff had not written a single page when they first met. He sold them on the concept of an endearingly adrift young man who excels at animating other people’s parties, but has no idea how to get his own life started.

“Cooper is incredibly observant. He notices tiny details that nobody else does about someone’s personality or body language,” said Johnson of what enticed her to co-produce the film and co-star with Raiff. “I find that to be a really valuable trait when someone’s making a movie.”

Soon after the movie’s world premiere in January, it was announced that Apple had secured worldwide distribution rights. “Cooper captured our imagination at Sundance with his screenplay about the beauty of relationships in all their guises,” said Matt Dentler, head of features at Apple Original Films, in an email.

Both of Raiff’s feature screenplays thus far have focused on transitional instances in his protagonists’ (and his own) nascent understanding of self-determination.

“Change is a good way to say something about people,” Raiff said. “With my first film I wanted to talk about the pain of leaving home and growing up. And ‘Cha Cha’ is about how your twenties are this time, if you’re lucky enough, where you can figure out who you are.”

Pondering when he felt his own inner fête had finally begun, Raiff revealed it happened when he decided to take charge of his conflicted emotions toward his parents.

“My party started when I sat my butt in therapy like a month and a half ago,” he said. “I made a movie about what your twenties are supposed to be for, but had no idea what they should be for. It was easy to make that movie because it didn’t ultimately give an answer.”

Having now amassed enough security in his directing abilities, Raiff is cautiously optimistic about where he is today, personally and professionally.

“Directing is now the thing I love most, almost more than writing. Even if I feel very inexperienced at it because I’ve only done it for a total of 40 days,” he said with a laugh.

With that in mind, I asked him when or how he considers one reaches adulthood? “When you figure out who you are, that’s when you become an adult. When you can take responsibility for yourself and others,” he said, and proceeded to pull out his phone to search for a quote about maturity by a character in the film “Lars and the Real Girl.” It reads:

Raiff’s next outing, a based-on-a-true-story father-son saga set in the world of hockey, will continue to address the interpersonal dynamics of asserting oneself. But he’s taking things slow, making time to find fulfillment away from set: around loved ones or alone writing.

“When ‘Cha Cha’ did well, the first feeling that I had was relief — I’m going to be able to make another movie,” he recalled. “That feels like the success that I do get something out of, because I know that for the next, however long, I’m going to feel comfortable doing what I love to do.”