Coronation Street resident Yasmeen Nazir (played by Shelley King) has been the victim of harrowing behaviour exhibited by Geoff for months but the storyline on the ITV soap finally reached its climax this evening as Yasmeen fought back whilst her husband threatened her with a knife. However, many viewers were confused by Eileen Grimshaw’s (Sue Cleaver) mistake which could have saved Yasmeen before she had to resort to the most extreme lengths in tonight’s episode.

Only a handful of residents have shown concern for Yasmeen, such as her beloved granddaughter Alya (Sair Khan), who has never liked Geoff.

She has continually tried to persuade her grandmother to leave her abuser and referred her to police officers under Clare’s Law, for information about Geoff’s past.

They confirmed Geoff has been arrested for affray but when she confronted him about this, he once again managed to spin the truth.

Earlier this week, Yasmeen finally looked to make her escape and had hidden a suitcase in the house, not aware of the cameras Geoff had installed to spy on her every move. 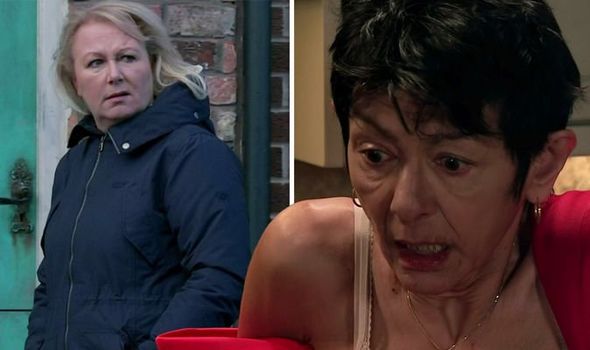 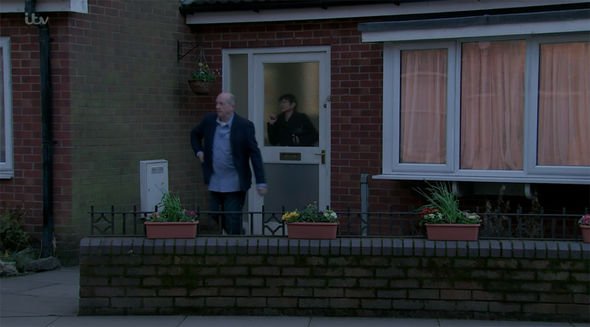 Geoff forced her to reveal the suitcase and proceeded to burn all the contents in the garden, leaving Yasmeen even more terrified.

Tonight saw things reach their worst and Yasmeen felt she had no choice but to fight back against Geoff’s horrible behaviour.

He managed to humiliate her in the pub in front of Sally Metcalfe (Sally Dynevor) and his son Tim (Joe Duttine) after not telling her he had lent money to pay for their upcoming nuptials.

Yasmeen was understandably angered after Geoff has spent months taking money from his wife without her permission and limiting her spending. 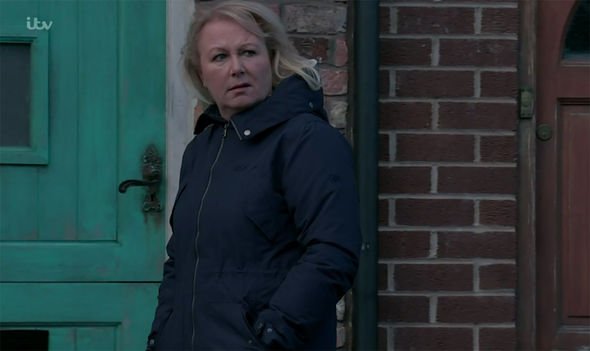 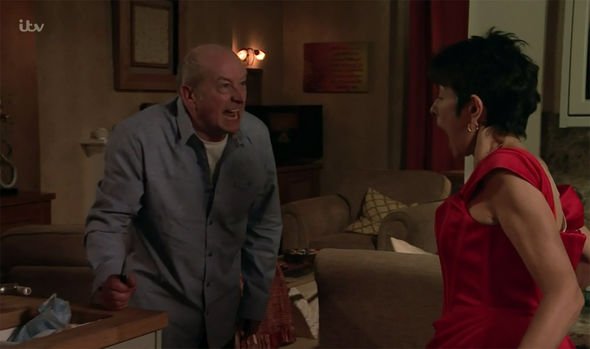 As the punters in the Rovers watched the pair engage in a heated discussion, one resident got a hint of something wrong behind-closed-doors shortly after.

Eileen saw Geoff shout at his wife and lock her in the house as she watched from afar.

She later returned to the pub and informed the others, including Geoff’s son Tim and daughter-in-law Sally what she had witnessed.

Eileen explained: “Just seen him on the doorstep, your dad didn’t look very happy, they were having words.”

“What couple doesn’t row from time to time hey?” replied an oblivious Tim.

But fans of the ITV soap were left wondering why she missed out the key detail of telling her friends she had witnessed Geoff trap Yasmeen in the house.

Especially after Eileen herself saw many of her friends in Weatherfield turn on her after she was terrorised by ex-husband Pat Phelan (Connor McIntyre).

Taking to Twitter, one fan asked: “Are they all blind and obviously looking at her she’s terrified. Eileen has been through similar so should know #corrie #CoronationStreet.”

“Are people thick not seeing what’s happening? Omg Eileen just saw what he did just #Corrie @itvcorrie,” said another.

A third added: “Ffs Eileen you must know that isn’t normal? #Corrie.”

“I was surprised Eileen didn’t tell anyone that she saw Geoff locking Yasmeen in the house; she only suggested they were arguing #Corrie,” commented another viewer.

“I hope Eileen recognised the similarity to what was happening with Phelan  #Corrie,” noted a fifth.

It comes after Eileen already was aware of Geoff’s odd behaviour when Tim told her about his dad locking Yasmeen in his magician’s box.

At the time, she told Tim it sounded as though something wasn’t right but it has not been revisited since.

As Yasmeen faces up to her actions, will Eileen be the one to act as a lifeline as she starts putting the pieces together of Geoff’s abuse?

If you have been affected by Yasmeen’s storyline, visit Women’s Aid here or ring the National Domestic Abuse Helpline on 0808 2000 247.