Dan Walker, 43, doesn’t usually host weekend instalments of BBC Breakfast but he featured on Saturday’s programme to discuss what was coming up on Football Focus later on in the day. To do this, he spoke with Mike, 55, as he was the co-star who had the most amount of knowledge on the headlines emitting from the sporting arena. However, when the former Strictly Come Dancing star came to introduce his BBC colleague, he got his name wrong by calling his co-star “dad”. 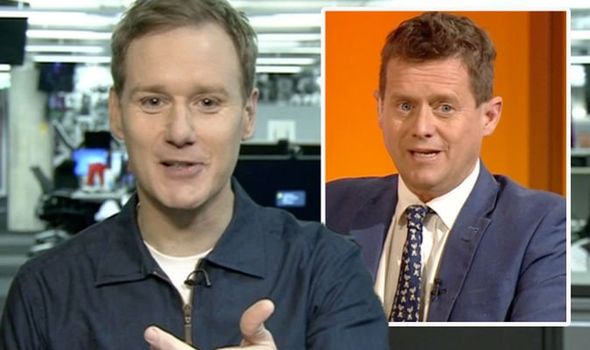 After teasing his colleague’s appearance on the show, Mike said: “Good morning, dad. I mean Dan, not dad.”

This left the sports reporter humiliated as he let out a nervous laugh and Dan also found the moment hilarious.

“Hold on a minute, that would be a weird relationship, wouldn’t it?” the Football Focus host said as he was left baffled by the remark.

“Yes, good morning, son,” he replied as he continued the joke before going on to speak about what was coming up on the sport’s show.

However, he was had to stop his train of thought as he was still distracted by the blunder, adding: “Took me a while to get over that one, Michael.”