Nate (played by Jurell Carter) seems to have finally got his life together after he arrived in Emmerdale last year. The youngster finally has a job, albeit under Kim Tate’s (Claire King) control, and has been enjoying a romance with Tracy Metcalfe (Amy Walsh). Scenes airing on the ITV soap this week will see the pair get some life-changing news as the heartthrob’s girlfriend ends up in the hospital. However, although he takes her to A&E after an accident, his boss might not be so understanding and take action as a result.

Upcoming episodes will see Tracy decide to spend more time with her lover by helping him out on his farm which is owned by Kim.

Whilst cleaning out one of the turkey coupes, Nate’s girlfriend slips, ends up badly hurting her wrist and gets the once over by doctors just to be sure.

Having had numerous tests done, the pair sit and wait for the results but it’s clear the young farmhand has other matters on his mind.

In a preview clip from Wednesday night’s episode, the heartthrob’s partner is sat on a hospital bed and asks her other half what’s bothering him.

After she hands over a urine sample, the villager’s beau tells her she could have “peed a bit quicker”. 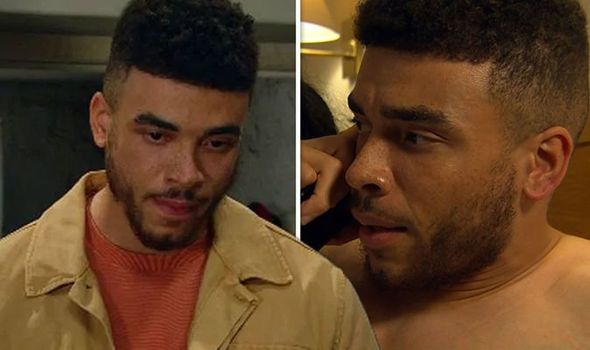 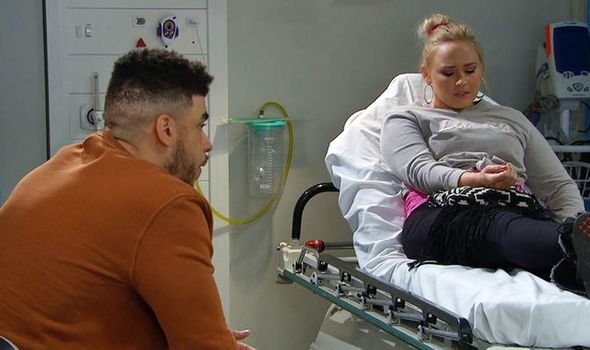 “I didn’t need to go,” Tracy hit back, to which her boyfriend replies: “I do, I should be back home getting ready for this client.

“He’s loaded apparently and could bring in a lot of business,” he adds, to which his girlfriend replies: “Well, can’t you call him and tell him you might be late?”

“I can’t be late, that’s the whole point. Kim’s already given me a formal warning,” Nate explains before his partner tells him to go if he’s worried he’ll lose his job.

“If you leave now, you’ll probably still make it in time,” she says, to which the heartthrob states he’s not going to “abandon” her. 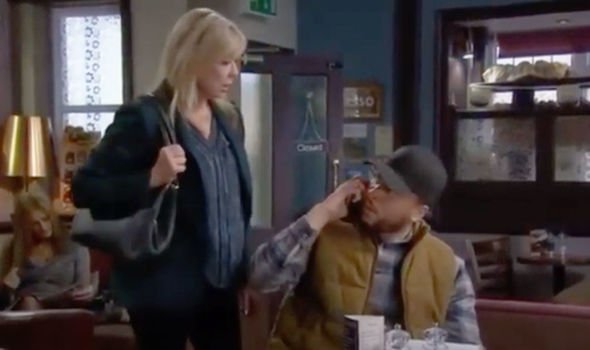 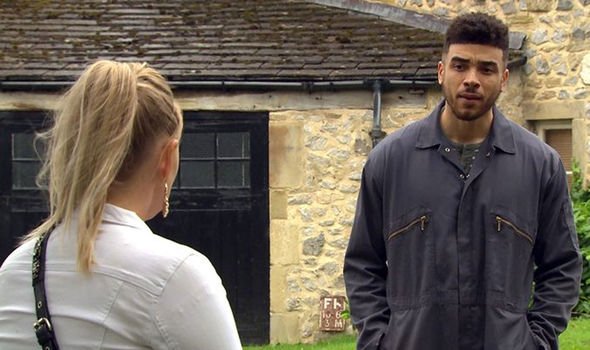 “I’ll manage. You can come and pick me when you’re done,” the villager affirms to which Nate gets up to leave.

At the same time, a nurse walks in to tell the pair some very unexpected news as she has the results of Tracy’s tests.

With one of them being a urine examination to rule out if she is pregnant, the medical professional makes the announcement she is with child.

This leaves both of the characters in a state of shock a neither were expecting to discover they’re going to be parents.

Having to process the news, it’s likely Nate won’t be going anywhere and could miss his appointment with the client.

With a deal lost and furious with her employee for messing things up, Kim could be forced to drop the young farmhand altogether.

This would certainly be a cruel blow for the character given he is going to need more money now Tracy is expecting his child.

Will Cain Dingle’s (Jeff Hordley) long-lost son be forced to beg his boss for his job back and tell her he will do anything to get back in her good books?

Speaking about the new plot, Nate star Jurell spoke with Express.co.uk and other press, explaining how his character reacts to the life-changing discovery.

The soap star said: “I think he’s just completely terrified. They’re enjoying the [fun] side of the relationship, I think they’re quite an intimate couple.

“But I think they’re both playing it clean and safe so I think this comes as a massive shock, but I think Nate’s terrified.

“And, of course, with his own family relations, I think it makes him more in a terrified state, to be fair.”

Will Kim see how worried Nate is about his future and give him one last chance to prove himself?