Are you a fan of The Marvelous Mrs Maisel? The Emmy award-winning comedy series, which stars Rachel Brosnahan as a 1950s housewife turned stand-up performer, has been a hit with viewers ever since it first aired in 2017 but will soon come to a close with its fifth and final season.

Want to know more about what viewers can expect from season five? Keep reading for all the info…

WATCH: Check out the trailer for The Marvelous Mrs Maisel season four

When will season five of The Marvelous Mrs Maisel be released?

Sadly, Amazon is yet to set a premiere date for season five of The Marvelous Mrs Maisel, but we can confirm that filming has already kicked off so viewers can rest easy knowing that it’s on its way!

Lead actress Rachel confirmed the good news on Instagram, sharing with her followers a series of behind-the-scene photos alongside the caption: “We’re hard at work on the next season and hearing about the things you loved has been wind in our sails. More to come.”

She was also spotted earlier this month filming scenes at the Rockefeller Center in New York City in one of her finest Midge getups yet alongside an exciting new co-star (more on that below…), so if all goes smoothly, we could see the series land on Amazon Prime in early 2023.

Who will star in season five of The Marvelous Mrs Maisel?

As Deadline reports, “the show’s entire series regular cast, led by Rachel Brosnahan, is coming back,” meaning that as well as the lovable Midge, fans can expect to see manager Susie, played by Alex Borstein, ex-husband Joel played Michael Zegen and parents Rose and Abe, played by Marin Hinkle and Tony Shalhoub respectively, return for season four. Luke Kirby will, of course, be back as the inimitable Lenny Bruce. 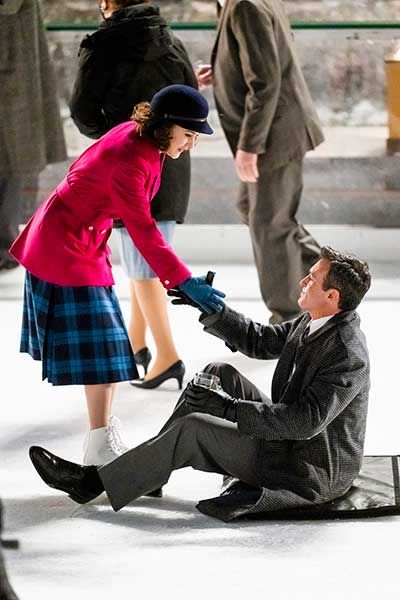 It also seems that viewers can look forward to even more incredible guest stars following Milo Ventimiglia, Hari Nef and Kelly Bishop’s star turns in season four. Already confirmed for the new episodes is Veep alum Reid Scott. Details of his role are being kept quiet, although it looks like he’s set to get quite cosy with our favourite comedienne if behind-the-scene snaps from filming are to be believed!

Why is The Marvelous Mrs Maisel ending?

Show bosses confirmed that the series would be coming to an end earlier this year when the announcement for season five was made. In a statement, the head of Amazon Studios, Jennifer Salke, said: “Amy, Dan [Palladino, executive producer], and The Marvelous Mrs. Maisel have blazed an unparalleled path, elevating the stories we tell about women, challenging the norms in our industry, and forever altering the entertainment landscape with their one-of-a-kind storytelling.”

She continued: “The dozens of awards cement Maisel’s legacy in many ways, but what’s even more enduring and poignant are the characters Amy created and the joyous, brilliant, singular world she and Dan brought to life.

“This series has meant so much to Prime Video and the effects of its success will be felt long after its final season. I can’t wait for fans and our worldwide Prime Video audience to savor each moment as we embark on the culmination of this groundbreaking and unforgettable series.“