The intelligence may be artificial, but the thrills are real in this month’s collection of sci-fi picks. 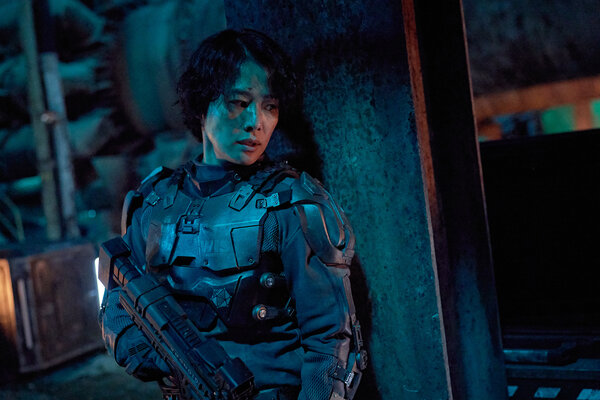 If ethical and emotional issues pertaining to artificial intelligence are your jam, this Netflix original is a must-see. And if you just want badass action with robots, brawls, devious scientists and grand futuristic landscapes, it’ll do the job, too. The South Korean director Yeon Sang-ho burst on the international scene in 2016 with the insta-classic zombie actioner “Train to Busan,” then he delivered more undead with the sprawling “Peninsula” (2020). Now Yeon is back with “Jung_E,” which considers A.I. with a degree of emotional sensitivity rare in a film that also deploys virtuosic whiz-bang fights.

The starting point is a post-climate apocalypse Earth in which millions of people have relocated to orbiting shelters. Three of those stations have attacked the others, leading to a decades-long war, and Earth is now dominated by the military-industrial complex. The goal of one such company is to transfer the brain of the comatose war hero Captain Yun Jung-yi (Kim Hyun-joo) into an exact replica to create a mighty combat android. In a key wrinkle, the project is led by Yun’s own daughter, Seo-hyun (Kang Soo-youn). While “Jung_E” starts off like a riff on “Edge of Tomorrow,” it quickly becomes obvious that Yeon is interested in more complicated matters, including the moral standards of cybernetics and the perils of the grieving process. This beautiful movie rewards patience — and heck, that final battle on a monorail is awesome, too.

Rent or buy on most major platforms.

Some movies proudly claim their B heritage, and so does this goofball tribute to the heady days of 1980s exploitation, which nails that period’s style. Were it not for a drone steered by young Gary (Dominic Mariche), you might find yourself wondering what year Jason Eisener made his film. Much to Gary’s chagrin, his older sister, Sam (Phoebe Rex), falls in with a group of bad kids led by the handsome-but-psycho Billy (Calem MacDonald, giving off strong Christian Slater in “Heathers” vibes).

Just as the teens host a bacchanalian Halloween party at Gary and Sam’s house, while their parents are away, aliens decide this is a perfect time to attack. Looking like actors in rubber suits, they have an underwater lair, vomit acid-like green goo and kill everybody in sight — in other words, they are perfect. Add wrestling references and a vintage-sounding score, by Andrew Gordon Macpherson, awash in synthesizers, and you have a near-perfect study in retro silliness. The ending suggests there might be more to come.

The Projectionist Chronicles the Awards Season

Stream it on Arrow.

Trust the prolific absurdist auteur Quentin Dupieux (“Deerskin,” “Mandibles”) to come up with a comically metaphysical take on time travel. Over the past decade, Dupieux has emerged as France’s king of high-concept, low-budget comedy, and this is among his finest efforts. Alain and Marie (Alain Chabat and Léa Drucker) buy a house whose amenities include a time portal in the basement: If you climb down a manhole, you emerge, in an Escher-like feat, on the top floor — but also 12 hours later and 3 days younger.

Marie becomes obsessed with traveling through the duct while Alain can’t be bothered. As if this weren’t enough for a 74-minute movie, Dupieux adds a subplot about Alain’s boorish boss (Benoît Magimel) getting a transplant of an electronic remote-controlled penis. “Incredible But True” never deviates from a droll, matter-of-fact tone (beautifully handled by the cast) that constantly rubs against the preposterousness of the situation, not to mention its impossibility. The flourish on this delightful cake: a score entirely based on tracks from the synthesizer-heavy, Wendy Carlos-like album “Jon Santo Plays Bach,” from 1976.

Peter Mimi’s “Mousa,” from Egypt, is not unlike Joko Anwar’s “Gundala,” from Indonesia: Both films adapt superhero tropes familiar to North American viewers to a new setting and with a social-justice conscience. Both movies are rough-edged compared to similar Hollywood products, but it is fascinating to watch how familiar plot points emerge in a different context. Yehia (Kareem Mahmoud Abdel Aziz) is a brilliant engineering student crippled by terminal shyness. After watching, powerless, thugs burn his father alive in their home, the young man builds Mousa, a human-size robot controlled via a virtual-reality headset, and unleashes it on the criminal set — Mousa, for example, goes after traffickers who kidnap children to sell their organs to the rich.

The film is overall less interested in robot-led action — there are minimal set pieces, considering the subject — than in people’s reaction to it as Egyptians welcome a new folk hero. Unfortunately, some take exception to Mousa’s actions and Yehia must face corrupt authorities embodied by his professor, Dr. Nassar (Eyad Nassar). Clearly the tradition of sneaking in messages about social ills under a sci-fi cover is alive and well.

Rent or buy it on Amazon.

An older man living in the middle of the Vietnamese countryside successfully performs a body transplant on his nephew. Far-fetched? Just a little, but then this is a column about science-fiction movies, not a guide to the Science Channel. When the mild-mannered cartoonist Tam (Cuong Seven) is diagnosed with terminal cancer, Uncle Ma (Hoang Son) grafts Tam’s head onto a healthy stranger’s body. In a nice touch, Tam must wear turtlenecks to hide his huge scar, making him a stylish medical miracle. But beware of transplanted parts that come with baggage: Because his unwitting donor, Nghia (Vu Tuan Viet), was a hit man, his past takes over Tam’s life. Fortunately, Nghia’s body appears to have retained a certain amount of muscle memory and while Tam finds himself embroiled in shady business, he also has inherited extraordinary abilities of the butt-kicking variety.

Victor Vu’s film (released in Vietnam in 2017 but just streaming in the U.S.) features some primo chases and hand-to-hand combat, but its most arresting asset is the way it amusingly keeps coming up with melodramatic revelations. Forget about mixing and matching heads and bodies: The plot twists rely on family connections.