Home » TV and Movies » For Manifest's Michaela and Zeke, Is It Happily Ever After? — 2021 FIRST LOOK

For Manifest's Michaela and Zeke, Is It Happily Ever After? — 2021 FIRST LOOK

Manifest‘s Zeke Landon is alive and well, which is always good first step towards a long-lasting marriage. But is “happily ever after” in his and wife Michaela’s future?

Life seems back to normal for the newlyweds, at least to look at these exclusive first photos (above and below) from Season 3 of the NBC drama (premiere date TBA). And lord knows, the couple was put through the wringer in Season 2, which ended with Zeke (played by Matt Long) freezing to death, and thus meeting his “death date,” but then miraculously coming back to life in Mick’s (Melissa Roxburgh) arms.

“Zeke is alive and well!” showrunner Jeff Rake affirms to TVLine. “Three months after he beat his death date, he’s finally able to look toward the future and a life with his bride Michaela.

“But” — and there is always a but, on twisty/turny Manifest — “his survival has raised even more questions about the callings and the fate of the passengers,” the EP previews. 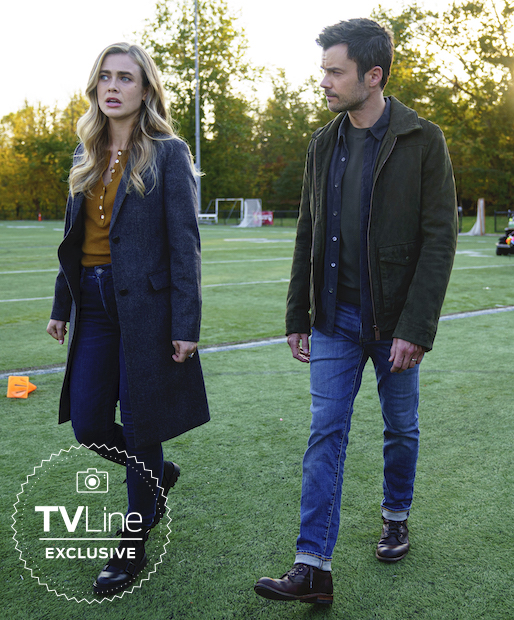 That tease is in keeping with what Rake previously told us: “Married life for Michaela and Zeke will understandably be a whole new chapter in their journey. But their domestic life is quickly thrown an unexpected wrench.” Plus, as he shared over the summer (and not necessarily ominous!), the newlyweds move in together with a “third party.”

Elsewhere when Manifest Season 3 opens: Ben and Saanvi (Josh Dallas and Parveen Kaur) do a deep dive on the Flight 828 tailfin, which was found off Cuba by a boat named Tesoro di San Antonio; a long-lost character will make a shocking reappearance; and Jared (J.R. Ramirez) will have a complicated new relationship of the romantic sort.

Meanwhile on the casting front, The Americans‘ Holly Taylor will play Angelina, a Flight 828 passenger who thus far has flown under Ben’s radar, and whose emergence will play an integral part in the lives of the Stone family; Will Peltz (Euphoria) will recur as Levi, a teaching assistant at the university where Ben works whose expertise in archeology brings him in contact with Olive (Luna Blaise); Warner Miller (Marvel’s Luke Cage) will play Tarik, Grace’s (Athena Karkanis) estranged stepbrother who reluctantly agrees to help the Stones when they have nowhere else to turn.

Also recurring, Mahira Kakkar (BBC’s A Suitable Boy) will play Dr. Aria Gupta, a researcher studying the phenomena surrounding Flight 828, while and Ali Lopez-Sohaili will play Eagan Tehrani, a passenger whose photographic memory proves to be a major asset to Ben.

Want more scoop on Manifest, or for any other show? Email [email protected] and your question may be answered via Matt’s Inside Line.