“Four Good Days” is a hideously overwrought slice of the life of an addict, and her codependent mother, from the opening frames of Mila Kunis gleaning her toothless, rotten gums after showing up unannounced and shaking on Glenn Close’s doorstep, to a climactic meltdown involving Kunis screaming “I need your pee!” to a paralyzed, enabling Close. The fact that this emerged from a harrowing, true-life Washington Post article by co-screenwriter Eli Saslow can’t disguise the over-the-top elements of the movie (from Close’s bizarre wig to Kunis’ twitchy performance) that feel ripped from fiction and ooze obvious staginess, the feint of actorly transformation.

And what of the disappointing fact that it was directed by Rodrigo García, a master chronicler of interior lives, from “In Treatment” to “Nine Lives”? Despite Close’s valiant efforts, everything about “Four Good Days” feels artificial, like face powder barely caked on over the horrors of a TV movie of the week.

When “Four Good Days” begins, we meet an unrecognizable Mila Kunis as Molly. She’s a 10-plus-year-long heroin addict who’s been all but kicked to the curb by her mother Deb (Close), a kindly massage therapist who doesn’t display any of her daughter’s tendencies for addiction aside from the occasional (and at times very much needed) swill of white wine. Teeth chattering, whole body shaking, and with gums blackened, Molly explains to Deb that she’s been living under a bridge, and also that she’s decided she wants to get good and sober. Unfortunately, she’s barely been “clean” 24 hours, and is instead dropping into the quaking symptoms of withdrawal. Deb, refracting Molly’s neediness with the kind of flinty reserve that only Glenn Close can achieve, promptly shuts the door in her daughter’s face.

Yet eventually, when Molly’s condition worsens and her desperation heightens, Deb (and at the chagrin of her husband Chris, played by Stephen Root) is forced to relent, bringing Molly to the hospital where she learns that, in four days, she will be eligible for a shot of naltrexone. Taken once a month, it blocks the effects of opiates on the brain and body, and makes getting high impossible. But Molly can’t take the shot until she’s a few days clean, and so she and her mother are forced to cohabitate, while she rehabilitates, and their relationship tries not to deteriorate. 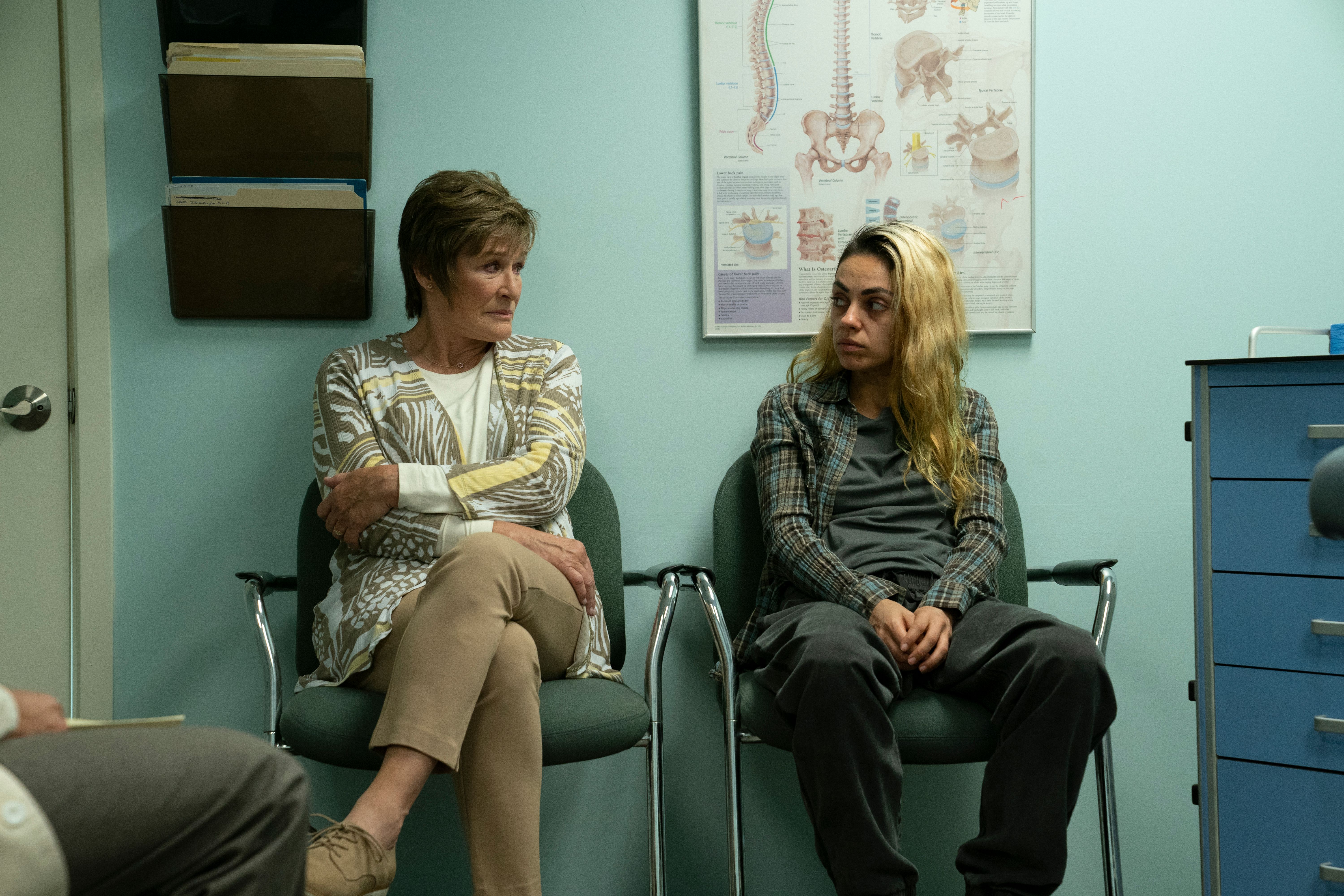 That mostly proves a challenge, as Molly is capable of every kind of addict defensiveness, guilt-tripping, and deflection imaginable. Deb is understandably skeptical of improvement, as Molly it turns out has been in detox — to the shocked face of a judgy nurse — 14 times. Mila Kunis, stripped down to bare bones in oversized clothes and with lesions dotting her face, thrashes and shakes her way through a performance that elicits empathy, but never stops feeling like an act of showiness.

Close is in lock-step with her as a mother who doesn’t trust her own daughter. “If I say it’s sunny out, are you going to go check?” Molly screams at Deb. “I may have to.” But unfortunately, this performance feels closer in spirit to Close’s work in “Hillbilly Elegy” than anything else, and even fresh off her eighth Oscar nomination, it’s mystifying to watch what is obviously a curious choice for this actress outside of her career-long companionship with Rodrigo García (“Albert Nobbs”). And that wig is just awful.

As the movie is almost entirely confined to Deb’s point of view, the editing makes a curious misstep late into the movie when it abruptly shifts to Molly’s perspective (while she is out on the inevitable, you-can-see-this-coming-from-space relapse bender that this kind of movie necessitates to move things along) and then back again. And for a movie so homed in on Deb’s interior life, it comes up curiously empty: What are her passions? What does she feel when she’s not caring for her daughter? Here is a woman that needs serious Al Anon, but is unable to acknowledge her own complicity in her daughter’s ruination.

Perhaps the most fascinating aspect of this shallow movie is left unexplored: why doesn’t Deb look in the mirror at her role in Molly’s addiction? There is some late-breaking backstory crammed in about a brief period of abandonment by Deb, plus Molly’s mostly absent father figure, but it comes across more as tacked on than baked into the roots of this thing. Molly does have two children, a boy and a girl, who only get about five minutes of screen time in which Kunis manages to convince as a woman with zero maternal instinct, but mostly because she’s been high their whole lives. When Molly tries to play video games with her son and ends up losing, it’s harrowing as he screams “you suck! You suck! You suck!” first as playfully kidding, then in a full-on rage because, well, you get the gist.

As new movies open in theaters during the COVID-19 pandemic, IndieWire will continue to review them whenever possible. We encourage readers to follow the safety precautions provided by CDC and health authorities. Additionally, our coverage will provide alternative viewing options whenever they are available.