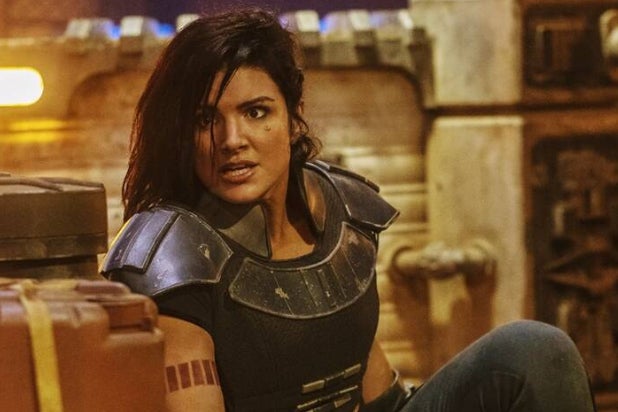 Gina Carano has been dropped from “The Mandalorian” after the actress posted “abhorrent” posts on her social media.

The former MMA fighter played Cara Dune on the series for the first two seasons of the hit Disney+ show.

“Gina Carano is not currently employed by Lucasfilm and there are no plans for her to be in the future. Nevertheless, her social media posts denigrating people based on their cultural and religious identities are abhorrent and unacceptable,” said Lucasfilm spokesperson in a statement to TheWrap.

Carano came under fire on Wednesday as the hashtag #FireGinaCarano trended over an Instagram post comparing being Republican today to being Jewish during Nazi Germany.

“Jews were beaten in the streets, not by Nazi soldiers but by their neighbors…even by children. Because history is edited, most people today don’t realize that to get to the point where Nazi soldiers could easily round up thousands of Jews, the government first made their own neighbors hate them simply for being Jews. How is that any different from hating someone for their political views,” wrote Carano.

Another Instagram story post showed someone with several masks covering their entire face with the caption “Meanwhile in California.”

Carano has spent much of 2020 sharing some particularly obnoxious political opinions on social media — including what looked a lot like support for baseless conspiracy theories and lies about nonexistent voter fraud in states that went for Joe Biden on Nov. 5, just two days after the election.

And only 9 days after that she invited people to join her on Parler, the social media platform preferred by right wing extremists. And shortly after that shared another baseless conspiracy theory against Democrats and mask-wearing. With that, many fans pretty much turned on her for reasons we probably don’t need to explain.

Perhaps as a result, Carano didn’t really say much else about politics for the rest of November and the uproar died down a little bit. But then in December, again while people still assumed that an announcement of a Cara Dune show was inevitable, she waded back into it with a tweet that used the topic of a COVID-19 vaccine to suggest mail-in voting cannot be trusted. Which predictably sparked an all-new backlash.