This quirky classic has been made all the stranger by the decision to turn it into an ill-conceived metaphor about fascism. 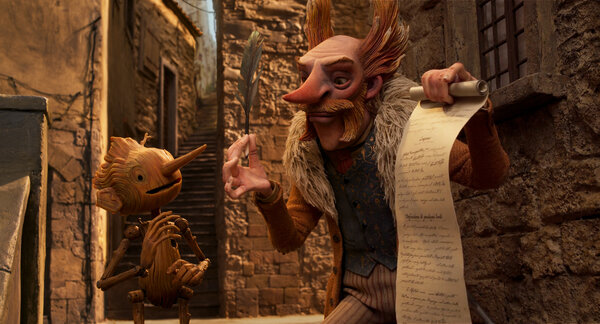 By the time a Fascist hard-liner barks this death threat in “Guillermo del Toro’s Pinocchio,” a stop-motion animated version of the children’s classic, you might be wondering if its impish little marionette is going to escape in one piece. At that point, Pinocchio has been threatened by scoundrels, run over by a car, lost body parts to fire and targeted by none other than Benito Mussolini. “These puppets, I do not like,” Il Duce says in a cartoonish accent right before ordering a henchman to take out Pinocchio. It’s a scary world, after all.

Written by Carlo Lorenzini under the pen name Carlo Collodi, “The Adventures of Pinocchio” was published in serial form beginning in 1881 and turned into a children’s book two years later. Surreal and violent, it opens with an enchanted piece of wood that ends up in the hands of a poor woodcutter, Geppetto. He intends to make a marionette so that he can “earn a piece of bread and a glass of wine.” Instead, he creates Pinocchio, a disobedient puppet who yearns to be a boy, runs away and is jailed, almost hanged and, after being transformed into a donkey, nearly skinned. He also kills a talking cricket with a hammer.

The movies seem to be going through a curious mini-Pinocchio revival: a live-action version of the story from the Italian filmmaker Matteo Garrone (with Roberto Benigni as Geppetto) opened in 2020; and Robert Zemeckis’s reimagining of the tale, which combines live action and animation (with Tom Hanks playing Geppetto), arrived in September. Certainly it’s easy to see why del Toro, a contemporary fabulist given to baroque and lovingly rendered nightmarish visions, was attracted to Collodi’s novel. It’s an odd and quirky fantasy — and far grimmer and more unsettling than Disney’s sublimely animated 1940 film suggests.

As weird as the story is, it’s been made all the stranger by the decision to turn it into a metaphor about fascism, a conceit that is as politically incoherent as it is unfortunately timed. (Del Toro directed it with Mark Gustafson and shares script credit with Patrick McHale.) The movie was, of course, finished before this year’s Italian general election, which brought to power a party whose roots trace back to the ruins of Italian Fascism. Even so, the real world casts a creepy shadow over the movie, which never explains the horrors of that period and instead largely uses Fascism’s murderous ideology as ornamentation.

The movie opens in the midst of World War I shortly before a plane — it’s unclear from which country — drops a bomb on Geppetto’s young (human) son, Carlo (voiced by Gregory Mann, who also plays Pinocchio). Fast forward to the 1930s, and Geppetto is still in mourning when he carves Pinocchio, who magically comes to life. Before long, the puppet is up to his familiar mischief, making his acquaintance with a loquacious, charm-free cricket (Ewan McGregor) and meeting the locals, some of whom — including a priest and a rampaging Mussolini toady — raise their arms in Fascist salute. They’re all puppets, get it?

The movie’s visuals, including its character design, were inspired by the lightly phantasmal, jauntily sinister illustrations that the artist Gris Grimly created for a 2003 edition of the Collodi book. Instead of the soft, rounded limbs and inviting, humanoid face of Disney’s Pinocchio, the character here is unequivocally wooden, with arms and legs that evoke pickup sticks and a pointy nose and spherical head that look like a carrot stuck in a pumpkin. The meticulous animation has stop-motion’s characteristic haptic quality, so much so you can almost feel the character’s rough and smooth surfaces, the burl of his form as well as the grain.

In its ominous tone, its dangerous close calls and multiple deaths, this interpretation of “Pinocchio” cleaves closer to Collodi’s original tale than Disney’s does, although like that earlier film, it tends to tip the scales toward sentimentality, particularly in its conception of Geppetto. (It also adds some tuneless songs, a mistake.) Pinocchio is still an agent of chaos who, by not behaving like a good child ostensibly should, brings grief and even danger to himself and to Geppetto. Yet, in the end, nothing makes Pinocchio more wholly, recognizably human than his disobedience and repeated mistakes, something this movie grasps.

Pinocchio is caught between the inhuman and the human for most of his episodic adventures, which is crucial to his singular mix of charm and menace. That helps explain the durable appeal of Collodi’s story, and it also makes del Toro and company’s decision to set the tale in Fascist Italy all the more baffling and disappointing. It’s evident that the filmmakers wanted to create a different, tougher and putatively more serious Pinocchio than the Disney version that has been lodged in the popular imagination for decades. But the movie’s decontextualized and disturbingly ill-considered use of Fascism is reductive and finally grotesque.