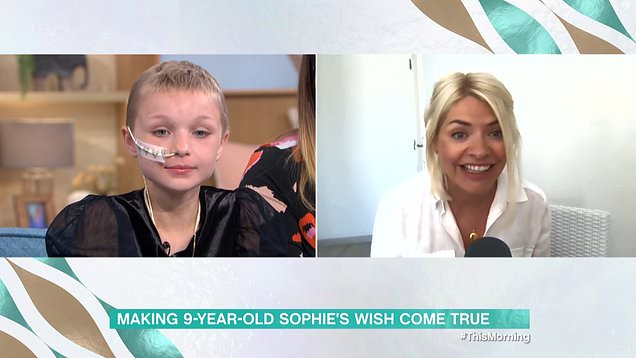 Holly Willoughby made a surprise appearance on This Morning during her holiday break to speak to a nine-year-old girl with terminal cancer whose wish was to appear on the show.

On Thursday’s edition of This Morning, Eamonn Holmes and Ruth Langsford were joined by Sophie Fairall and her parents.

Sophie’s dad explained that his daughter, who was diagnosed with a rare form of cancer called rhabdomyosarcoma and had a 12-inch tumour removed, has remained ‘so positive’ throughout her ordeal.

Sophie has made a list of activities she wanted to do, which included meeting Gordon Ramsay and feeding the animals at Chessington, in addition to appearing on This Morning.

While the youngster was granted her wish to be on the ITV programme, she wasn’t able to meet Holly – her favourite of the presenters – in person, as Eamonn and Ruth have taken Holly and Phillip Schofield’s place on the show during the summer holidays.

Nonetheless, Holly arranged for some special gifts to be sent to Sophie, before showing up unexpectedly for a virtual chat. 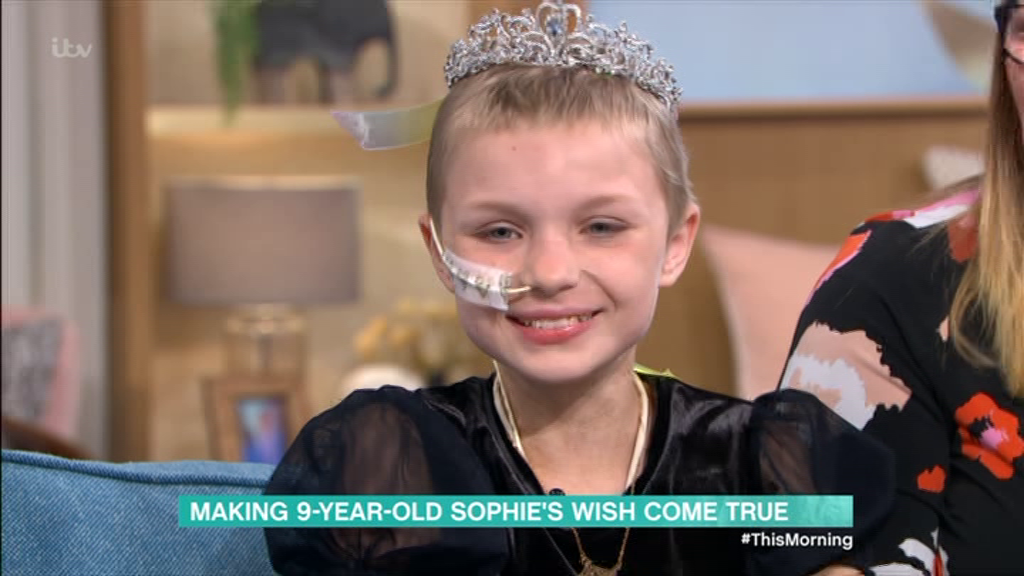 Sophie seemed delighted to receive the tiara Holly wore for the Christmas pantomime on This Morning as a present, beaming as her mum helped her put it on.

Shortly afterwards, Ruth introduced Holly via video chat, who said it was ‘so, so lovely to meet’ Sophie.

‘I’m so sorry I can’t be there but when I heard you were coming on the show I was like right, I want to be there, I want to see her and I wish I could be there, but I’m sending you a big virtual cuddle through the screen,’ Holly said.

The presenter explained to Sophie that after the Christmas pantomime, she asked if she could take the tiara from her costume home for her own daughter, but was told she wasn’t allowed.

Nonetheless, This Morning made an exception so that Sophie could be given the tiara instead, with Holly saying: ‘You have that with our love because I know you like that.’

‘Sophie is a very special young lady her personality, attitude, positivity she is so brave. Thank you #thismorning for making one of her wishes come true,’ another tweeted.

Someone else said that their ‘heart goes out’ to Sophie and her family, while another wrote: ‘Oh bless her, what a beautiful little girl. Life can be so very cruel.’

In addition to fulfilling the wishes on her list, Sophie is also campaigning to improve food in hospitals, particularly for child patients, her parents explained.