Susanna Reid, 50, was joined by Adil Ray, 47, to host the debate on Good Morning Britain with dating historian Nichi Hodgson and relationship therapist Emiliana Silvestri. A new ride at Disneyland, featuring around the tale of Snow White, has been hit with a furious backlash for highlighting kissing someone without consent and all individuals in the row on the show voiced different opinions. However, it was the host of the ITV news show who had to bring perspective into the “heated” discussion by telling her co-stars it wasn’t based on “real-life”.

Not happy about the criticism emerging, the broadcaster told the guests: “Really? Are we also going to update it so it doesn’t have all of those animals able to do superhuman things?

“Are we also going to update it so we don’t send the message you should give poison apples to people you don’t like?

“I mean, this is Disney, it’s not real-life,” she declared, with Nichi explaining her disapproval over the subject matter.

“No, it’s not real life but it’s really important to know the original story from 1812 didn’t feature a kiss at the end at all.

“So Disney invented the kiss in 1937 when the film came out. This film is over 80-years-old now. It was brought about in the depression and it was meant to cheer people up.” 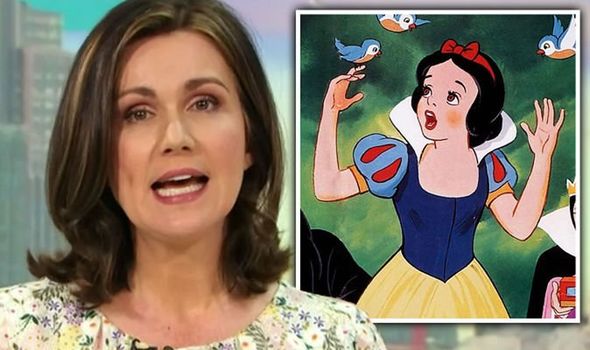 Nichi added: “But it was also brought up at a time when women didn’t have the same sort of rights to push men back.

“And when we didn’t treat children with such reverence so what’s really important is we talk now to kids about consent, about them having a body bubble, and about how they can’t let people into their space.”