The coronavirus pandemic has continued to dominate conversation in recent weeks and the case was no different on Jeremy Vine today. The Channel 5 show host regularly hears from viewers at home about their views on the day’s topics and this morning Jeremy spoke with Jolanda. The pair debated the dilemma of reporting those who fail to adhere to the UK Government’s social distancing advice to the police.

Jeremy kicked off the debate by seeing where Jolanda stood on the matter and whether she’d report those she spotted going against the advice.

He asked: “Jolanda, would you shop your neighbour?”

Jolanda didn’t mince her words in her response as she replied: “”No I don’t think I would, I’d have a word with them first.

“I’m a little bit afraid that this would be the thin end of the wedge.” 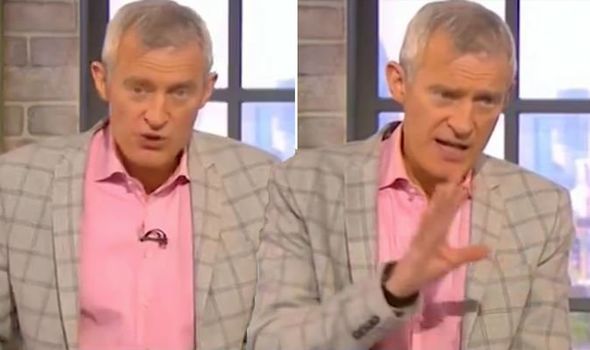 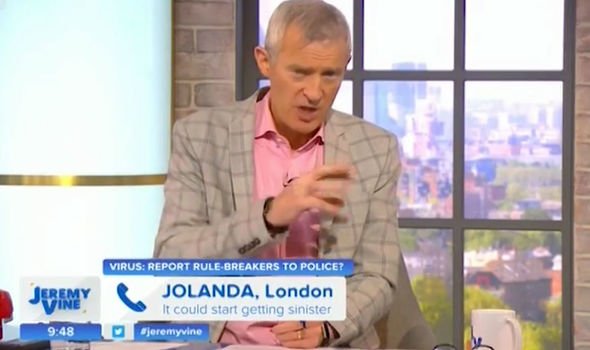 Jolanda continued: “If you see a group of people, obviously that’s a bad thing and you should say something,

“But by the time you’ve called the police and by the time they get there, they will have dispersed,

“I’m very much afraid that this might encourage malicious people to start causing nuisance and wasting police time.

“You only have to look at the bullying in the schools in this country to realise how much it can get out of hand.” 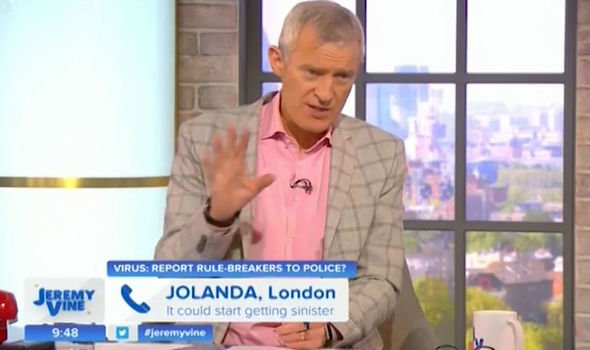 It’s what Jolanda said next which caught the Channel 5 host off-guard.

Jolanda added: “I’m just afraid that it could get to be like Nazi Germany. That would be absolutely dreadful.”

Jolanda defended her stance, saying: “I really believe that that could happen.

“We all need to be responsible but I just really think that to encourage people nationwide to report on other people at this stage isn’t a good idea.”

Jeremy was visibly taken aback by the caller’s claims but did empathise with her fears.

This isn’t the first time this week a caller has hit headlines for their rant on the Channel 5 show.

Yesterday, a caller took a very strong stance on the early release of prisoner amid the ongoing pandemic.

Instead of welcoming the idea, the caller ranted the government should “build more prisons” in order to accommodate a possible outbreak behind bars.

Once again, Jeremy was visibly stunned by the caller’s stance.

Jeremy Vine continues every morning at 9:15am on Channel 5.