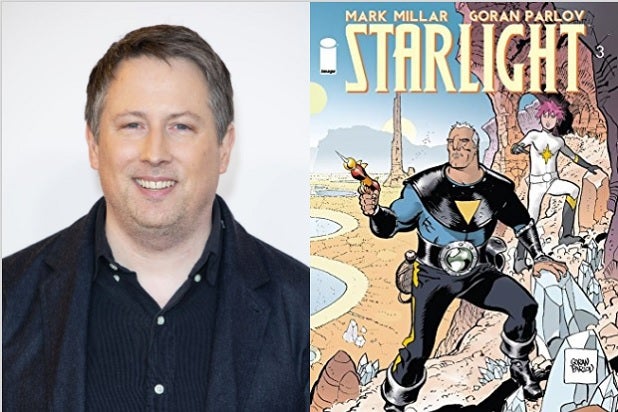 Joe Cornish, the writer and director best known for his debut breakout “Attack the Block,” has signed to write and direct the film adaptation of Mark Millar’s graphic novel “Starlight,” according to an individual with knowledge of the project.

“Starlight” centers on aging space hero Duke McQueen, who saved the universe 35 years ago but when he came back to Earth, no one believed his fantastic stories. McQueen married, had kids and settled into old age, but then his old rocket ship shows up, and he is called back for one more fantastic adventure.

Simon Kinberg and Audrey Chon are producing through their Genre Films banner, and Nira Park has joined as producer. Brian Dukes is overseeing for the studio.

Cornish, who co-wrote Marvel’s “Ant-Man” and Steven Spielberg‘s “The Adventures of Tintin,” earned rave reviews for his 2011 feature debut “Attack the Block,” which also launched the career of leading man John Boyega.

Also on the Millar front, Netflix has set a May premiere date for Mark Millar’s superhero series “Jupiter’s Legacy.” Based on the graphic novels by Millar and Frank Quitely, the eight-episode series centers on the second generation of superheroes, who “struggle to live up to their parents’ legendary public reputations — and exacting personal standards.”

The first season, described as “an epic superhero drama that spans decades and navigates the complex dynamics of family, power and loyalty,” is set to debut on Friday, May 7.