Sir Keir Starmer fueled a swathe of mocking and doubtful comments on his performance as Labour Party leader after he repeatedly bypassed questions on the Government’s coronavirus strategy. Some users jokingly suggested Good Morning Britain host Piers Morgan appeared to be a stronger Leader of the Opposition compared to Sir Keir, who was accused of “bending over backwards” not to hold the Government to account. One Twitter user said: “Piers Morgan is interviewing Keir Starmer on GMB this morning, and he’s holding the Government to account better than the opposition leader.” 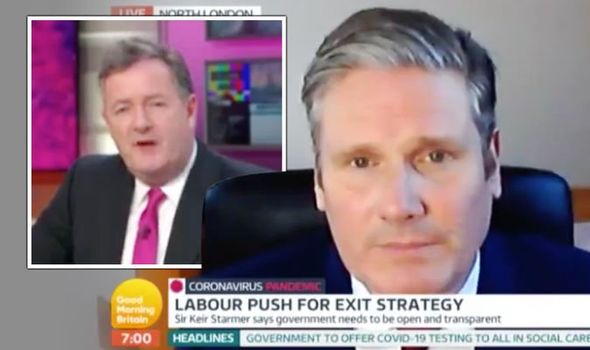 Another commented: “Seriously if you were listening to Keir Starmer on GMB and didn’t know he was the so-called Leader of the Opposition, you’d think he was in the Tory Party.

‘He’s bending over backwards, forwards and sideways not to criticise anything they’ve done wrong. Who voted for this clown?”

One viewer commented: “Keir Starmer, watching you on breakfast TV hoping to hear something interesting from you only to hear you constantly stating the bleeding obvious and trying to point score.

“Same old Labour and destined to be opposition for the next 20 years.”

JUST IN: Donald Trump announces US will halt funding to WHO over coronavirus response