The actress shares her ‘painful’ experience of working on the show when responding to an article about co-star Simu Liu’s recent comments regarding the show’s conclusion and spin-off.

AceShowbiz –Jean Yoon has shared her unpleasant experience while working on “Kim’s Convenience“. When responding to an article about co-star Simu Liu‘s recent comments regarding the show’s ending and spin-off, the Umma depicter slammed its “overtly racist” storylines.

The 59-year-old shared her arguments via Twitter. “The lack of Asian female, especially Korean writers in the writers room of Kims made my life VERY DIFFICULT & the experience of working on the show painful,” she first raged.

Yoon further claimed that she and her “Kim’s Convenience” co-cast members received scripts for the entire fifth season in advance of shooting due to the COVID-19 pandemic. However, she thought that the storylines were “OVERTLY RACIST, and so extremely culturally inaccurate that the cast came together and expressed concerns collectively.” 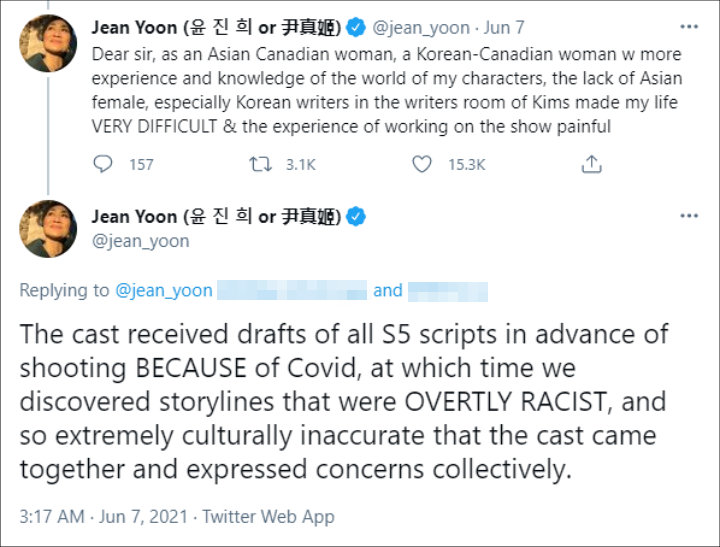 The Canadian star then cited an offensive joke that was ultimately removed from the show. She elaborated, “Pastor Nina comes to the [store] to pick up Mrs. Kim for a Zumba class. Mrs. Kim is wearing NUDE shorts, and Pastor Nina is [too] embarrassed to tell her she looks naked from the waist down. Mr. Kim enters, and the joke is that if you’re married you can say anything.”

“No one, esp. Mrs. Kim, would be unaware that a garment makes her look naked. Unless she is suddenly cognitively impaired. or STUPID. Stripping someone naked is the first act before public humiliation or rape. So what was so funny about that?” she stressed. “At my request, Mr. [Ins Choi] cut [the] scene.”

“THAT scene would have aired hours after 8 people, 6 Asian women, were shot in Atlanta, GA in a hate crime spree that shocked the nation. THIS IS WHY IT MATTERS,” Yoon continued. “If an Asian actor says, ‘Hey this isn’t cool,’ then maybe should just fix it, and say THANK YOU.”

In Liu’s original post, he criticized the producers’ decision to end the show and develop a spin-off about Nicole Power‘s Shannon Ross, who is the only non-Asian character on “Kim’s Convenience”. The actor, who is starring in Marvel’s upcoming movie “Shang-Chi and the Legend of the Ten Rings“, also described the pay as “horsepoop.”