Pose EP Breaks Down the Series Finale, the Show's Big 'Love Story' and That Diana Ross Swan Song (Plus, Grade It!)

In Legendary’s Season 2 finale, it all came down to two houses: Balenciaga and Miyake-Mugler.

Both had undergone quite the journey thus far. Balenciaga, who began the competition strongly, struggled to meet the judges’ expectations during their house performances in recent weeks. Not to be kept down, though, they came back in the bonus categories and propelled themselves all the way to the finale.

Meanwhile, Miyake-Mugler remained under the radar for the first half of the season, even fighting in the redemption battle in Episode 5 to stay in the competition. But something clicked after that, and they’ve since excelled and earned back-to-back-to-back Superior House of the Week trophies.

In the final house performances, both delivered their interpretation of the Future of Drag. The judges’ scores were held until the end of the hour, but their comments made it clear that both houses were neck-and-neck. 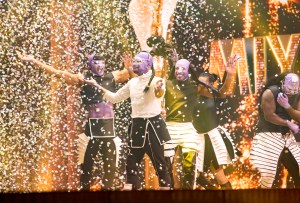 The final round, spins and dips, pitted ChaCha Balenciaga against Tati Miyake-Mugler, and they delivered. “Mother f–king battle, bitch! That is legendary!” judge Law Roach shouted at the end. It was another close call, but the round went to Miyake-Mugler.

After tallying up the scores from the all-house production and final redemption battles, Balenciaga earned a total of 47 points — 37 for all-house, 10 from bonus rounds. Meanwhile, Miyake-Mugler earned 38 points in the house performance and 15 in the redemption rounds for a total of 53 points.

Did the right house win Legendary Season 2? Grade the finale and the season overall below, and let us know your thoughts in the comments.