A singing, dancing reptile with charm to spare is put to meager use in this live-action musical. 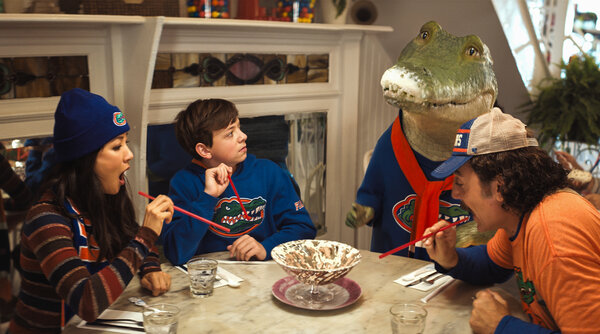 I was very delighted by the first ten minutes of “Lyle, Lyle, Crocodile,” Josh Gordon and Will Speck’s whimsical live-action musical about a crocodile that can dance and sing. The stage performer and magician Hector Valenti (Javier Bardem, bringing uncharacteristic humor to the part of a flamboyant, mustachioed P.T. Barnum type) adopts the tuneful Lyle (computer animated, and voiced by the pop star Shawn Mendes), and the two proceed to leap, tap and twirl their way through a charming and exuberant musical number. The song, “Take a Look at Us Now,” was composed by the songwriting duo Benj Pasek and Justin Paul, who also wrote songs for the 2017 musical “The Greatest Showman.” Like that film, “Lyle” has a brisk, whimsical momentum that is utterly infectious in the early going.

Then it stops dead: Hector absconds, 18 months pass and Lyle gets a new set of human foils to contend with, none of whom — Mrs. Primm (Constance Wu), Mr. Primm (Scoot McNairy) and their son, Josh (Winslow Fegley) — are remotely interesting. Lyle, by the way, can’t speak: he can only communicate by singing. Nonetheless, and unforgivably, another song doesn’t come along for nearly half an hour — an eternity by musical standards. Lyle and Josh go dumpster diving to find exotic foods: why isn’t this a musical number? After Lyle is jailed in a zoo by Wildlife Control, Hector (back in the film at last) and Josh orchestrate a late-night prison break: this should definitely be a musical number. This conflict, like many in the film, is resolved much too easily, in a show of writerly laziness. Or perhaps it’s a case of deus ex croc-ina.