Piers Morgan and Susanna Reid revealed they had a “surprise” for viewers on today’s show as they had England and Manchester United footballer, Marcus Rashford, on the phone-line, just hours after his campaign to implement free school meals for children over the summer holiday period was backed by Prime Minister Boris Johnson. Health Secretary Matt Hancock had earlier referred to the footballing star as Daniel Rashford in a Sky News interview this morning when discussing the campaign and this was quickly addressed by the GMB hosts, resulting in Marcus laughing it off.

The Manchester United player is all over the front pages of today’s newspapers after his campaign went viral over social media yesterday.

Hours later, Mr Johnson announced he had decided to make a U-turn on the free school meals policy after the impact of Rashford’s campaign.

This morning, the star phoned in to Good Morning Britain to speak to the hosts about the fantastic achievement.

Rashford praised the pair for their support, saying: “Thank you very much for everything you guys have done…” 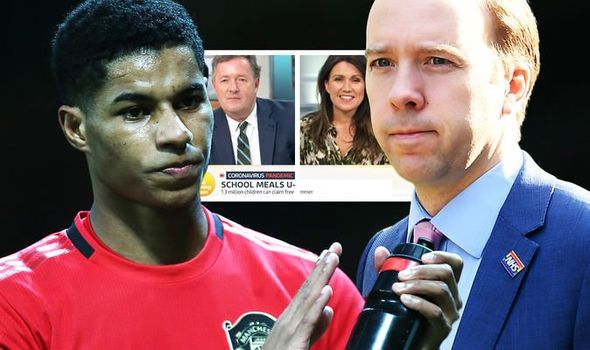 As Morgan asked how important the campaign had been to him, the star replied: “It’s just something I know a lot of people want to speak out about but they don’t have the platform.

“It was something we spoke about as a family and I’d been wanting to change.”

As the interview went on, the presenting duo probed him on an earlier blunder made by the Secretary of State for Health – Matt Hancock.

Mr Hancock had wrongly referred to Rashford as Daniel on a Sky News interview with Kay Burley this morning but when asked about it by the pair, he laughed off the mistake, admitting: “I’ve been called worse names.”