HBO’s new limited series Mare of Easttown asks for our patience… but it rewards it as well. The seven-hour murder mystery starring Kate Winslet — debuting Sunday, April 18 at 10/9c; I’ve seen five of the seven episodes — is the definition of a slow burn, taking its sweet time to immerse us in the atmosphere of a small town and the people who live and work there before springing a murder on us.

Yes, there is a crime to solve, but this story isn’t fanatically focused on tossing out clues and teasing whodunit. In fact, Mare sets the scene so vividly that the murder mystery almost isn’t even necessary. These characters, and this town, are enough to command our attention. 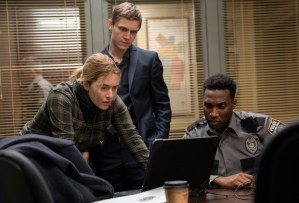 Winslet stars as Mare Sheehan, a grumpy police detective and former high school basketball star from a small Pennsylvania town well past its prime, where everyone knows each other and has lived there all their lives. She usually spends her days chasing down petty burglaries and humoring old ladies complaining about peeping Toms. But that all changes when a young mom named Erin (Devs‘ Cailee Spaeny) is found dead in the woods, and the unsolved crime stirs up memories of another local girl who went missing a year ago — and whose mom still blames Mare and the cops for never finding her.

We’ve seen murder investigations like this before, but it’s Mare‘s remarkably rich sense of place that sets it apart. Writer Brad Inglesby and director Craig Zobel (The Leftovers, Westworld) spend almost the entire first hour just introducing us to the rhythms of the town and letting them breathe. It feels slow at first, like you’re waiting for the story to start, but before you know it, the characters start to grow on you. This is also a part of the country that TV shows don’t often spend a lot of time in, and it’s refreshing to see it get the spotlight. Inglesby, who wrote the Ben Affleck basketball movie The Way Back, is a Pennsylvania native, and he clearly knows how these people talk, and how they connect to each other and depend on each other, and how deeply their lives are intertwined. (Old regrets and resentments hang over every interaction here like a dense fog.) 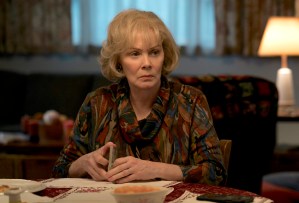 Mare can be a tough watch at times, and it verges on being too dreary as it wades through thorny subjects like teen pregnancy, suicide and drug addiction. But there’s comic relief to be found, too, often in the form of Jean Smart as Mare’s busybody mom Helen. It just feels like life: There are laughs along with tears, disappointments along with triumphs. And through it all, Winslet delivers a powerhouse performance. Yes, it’s strange at first to hear that harsh, flat Philly-area accent come out of her mouth, but soon enough, it blends into the background, and we just see her as Mare. Winslet digs deep beneath her character’s stubborn emotional armor to find the truth underneath, as Mare reluctantly works through some past trauma of her own. Plus, Evan Peters joins the series in Episode 2 as a county detective brought in to assist Mare on the case, and he and Winslet quickly establish a fun banter between them.

That second episode introduces a number of fresh complications that make Mare’s job even more difficult, and the series gets better and deeper with every episode. The investigation of Erin’s murder has no shortage of suspects, and as it branches out to envelop the whole town, it opens up old wounds, with Mare having to take a hard look at people she’s known her whole life. And then when there are big twists in the case, because the setting and characters have been fleshed out so thoroughly, it hits all the harder. This slow burn may take a little time to heat up, but just give it a chance. It’s well worth it.

THE TVLINE BOTTOM LINE: Mare of Easttown uses a vivid sense of place and a knockout performance from Kate Winslet to break the murder mystery mold.