The TVLine-Up: What's New, Returning and Leaving the Week of March 21

Tired of your social media feeds being dominated by parents’ picture-perfect idealism? So is Martin Freeman.

Breeders — which kicks off its second season Monday at 10/9c on FX — follows Paul (Freeman) and Ally (Daisy Haggard) as they raise their two children in London, and fumble through parenthood one blown gasket at a time. Differentiating itself from the pleasantries of other family comedies, Breeders refuses to sugarcoat the pains of parenting, and Freeman wouldn’t have it any other way.

“I couldn’t go to any more North London dinner parties where people just go on about how amazing parenting is without also admitting that it’s the hardest thing they’ve ever done and, sometimes, they want to throw themselves out of a window,” the actor tells TVLine.

In creating the series alongside former Veep producers Chris Addison and Simon Blackwell, the trio aimed for the comedy to be as brutally honest as possible, allowing the hardships of raising offspring to become the story’s focal point. “I don’t think we lie to the audience,” Freeman adds. “It couldn’t be an Instagram version of parenting. This show was always going to be as tough as possible, and sometimes as hard a watch as possible for the audience, while also, hopefully, making them laugh.” 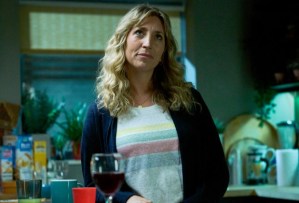 Haggard, herself, was attracted to the series’ fresh perspective, and says her actual parenting experience helped her step into Ally’s shoes. “I loved the way it was written, and the honesty,” she says. “It’s not afraid to get into the uglier bits of parenting. You could bring your own truth to it, but then, of course, the story takes you off in another direction.”

That direction, come Season 2, continues with a significant time jump that ages the couple’s children, Luke and Ava (this time played by Alex Eastwood and Eve Prenelle) to 13 and 10, respectively. According to Freeman, it was always the plan to have the children grow older between seasons.

“Everyone who has been a parent — and everyone who’s been a kid, frankly — knows that there are different stages to that relationship and those dynamics,” he says. “Also, with older children, you are able to throw different challenges at them, as actors. They can be on a set where there’s more grown-up stuff happening, which you can’t expect five-year-olds to go through, happily.”

Along with the kids’ sprouted heights comes more serious growing pains. Specifically for Luke, a mental health struggle ensues as a result of some crippling anxiety, a development that was introduced in the series’ freshman season.

“It hasn’t magically gone away. I suppose it’s developed and develops in the way that things do as you reach Luke’s age, and that obviously has consequences around the family dynamic,” says Freeman. “Luke has pretty regular anxieties that all humans have, and that preteens going into their teens have.”

As Luke’s issue intensifies and becomes an ongoing factor for the family, Ally is resistant to escalating the situation and finding the boy help… at first.

“They’re quite close, she and Luke, so she’s not very objective about him, but that does sort of change with the [new] series,” says Haggard. “She’s anxious to label him because she wants to feel that she understands what’s going on with him before they take it to the next level.”

Paul’s anger is also a cause of friction in the new run of episodes, and though he’s tried therapy (with multiple therapists, as we see in the premiere), the results are a mixed bag. 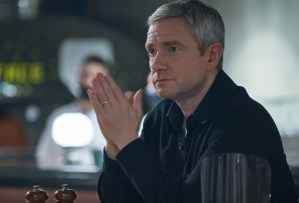 “He has that relationship with his anger that he knows is there. He knows it’s a presence,” says Freeman. “He knows he’s needed to talk to someone, but that’s not necessarily the biggest success. It’s something he’s struggling with and that continues even more in Series 2 with some hilarious and un-hilarious consequences.”

As for Ally, Haggard teases that her character “goes on quite a ride” in the upcoming season.

“There are many struggles, and their relationship has a few more obstacles in the way that they have to overcome,” she says.

Despite its serious subject matter, Breeders remains dedicated to pulling humor from hardships, allowing real-life parents in the audience to (hopefully) feel better about their lives and not be so hard on themselves.

“It deals with things that people can relate to, and that aren’t normally shown on telly,” says Haggard. “Parents at home having a difficult time who aren’t always perfect will watch it and either feel, “Oh, that’s what I do!” or they feel great about themselves because [our characters] behave worse than they do. I think that’s always quite useful to be able to watch things that don’t just show you the golden version and make you feel bad about yourself.”

Adds Freeman: “It’s good to see yourself, or things that you recognize as truth — the stuff that you’re not particularly proud of — represented. If you can laugh at something, we all know that is the most powerful medicine.”