Home » TV and Movies » ‘My Brilliant Friend’ Episode 3 Review: An Unhappy Lila Takes Her Rage Out on Everybody

‘My Brilliant Friend’ Episode 3 Review: An Unhappy Lila Takes Her Rage Out on Everybody

Lila Caracci, this week, is in a mood. As revealed in last week’s episode of HBO’s “My Brilliant Friend,” Naples’ resident rebel and feminist (played by Gaia Girace) is now pregnant by her abusive loser husband Stefano, and mama ain’t happy. The baby news came in total contradiction to Lila’s beliefs, as the miserable newlywed has firmly denounced marriage and children knowing they will offer no escape from her crummy life.

Lila remains, as ever, one twisted sister. She seems to almost manically flip between despair and sociopathic glee like in, say, the moment she feels a pang in her womb, pulls out blood from between her legs, holds out her hand to Lenu (Margherita Mazzucco) and, with a sick grin, says, “Does this mean the baby is dead?” Indeed, in the opening scene, Lila has miscarried.

She has a similarly demonic grin, served with a downright Kubrickian stare along with it, in a later scene where she seems to be emboldened by physical abuse, and having an audience for it. Storming into their flat, Stefano seizes her throat upon learning that Lila has allowed her brother Rino and his girlfriend to use their apartment as a pied-à-terre for sexual trysts — all in front of Lenu. Insecure in his own masculinity because he can’t successfully knock his wife up, Stefano punches the wall, threatens to kill Lila, calls her a “fucking bitch,” and storms out. Lila turns to Lenu, who’s just been invited by her schoolteacher to a party, and giddily asks Lenu if she can join her. Between Lila’s expression, the unsettling sound design, and an eerie dissolve, “My Brilliant Friend” for a minute there suddenly feels like a horror movie.

Speaking of horror movies, this week’s episode, titled “Erasure,” veers into supernatural territory when Lila’s wedding portrait — already deformed by its subject when Lila cuts it up into pieces and reassembles the shards into a modernist kind of collage — suddenly catches on fire in the now Solara-owned shoe shop. The rabbling women of the town become convinced that Lila is some kind of wicked witch who willed the fire to happen, which echoes Stefano’s claims last week that Lila has an “evil force” inside of her.

Back to the third-act party sequence, though, which feels like it’s setting the stage for what’s to come the rest of this season. There’s a lovely scene when, on the way up to Lenu’s teacher’s flat in a more moneyed corner of Naples, Lenu and Lila get into an elevator, which is apparently a first for Lila. It’s a testament to Girace’s subtle, sly performance that this moment, which feels unexpected and even improvisatory, is the sweet center of the episode. 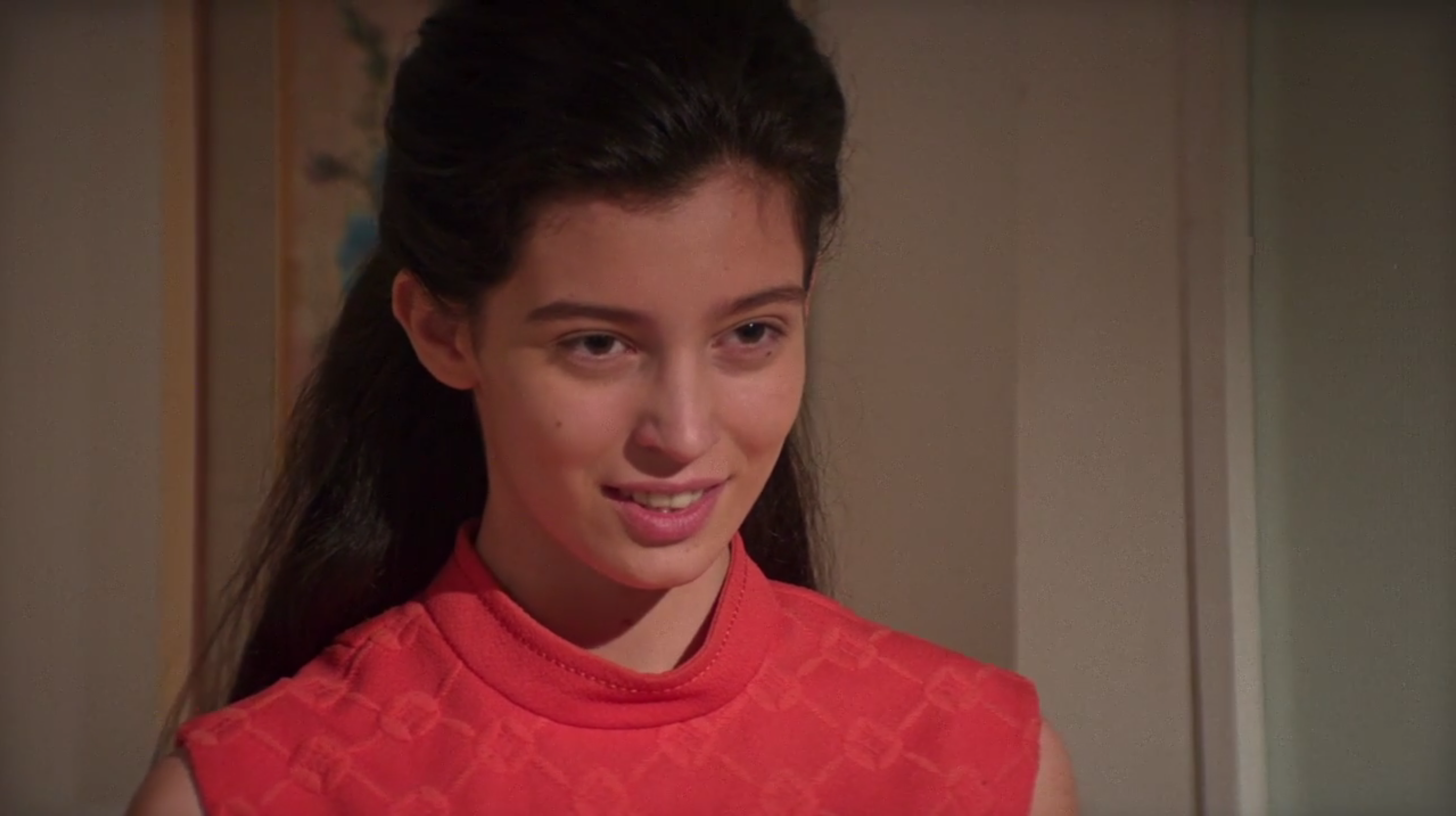 Then things get sour and downright nasty. At the door, they’re greeted by Lenu’s teacher’s cutie-pie son Armando before we’re re-introduced to dashing political aspirant and young man of letters Nino Sarratore, back from England, and with his girlfriend Nadia. With her long hair let down — something Lenu almost never does — Nadia radiates a more immediate kind of sexuality that Lenu perhaps aspires to. But there’s a bigger threat at play.

Peering through the flailing arms and legs of the rowdy folks bopping along to American rock music, she spots Nino talking to Lila and is, of course, immediately at attention. On the way to the party, while in the backseat of Stefano’s car, Lenu’s internal monologue hinted at a budding, new kind of jealousy of her best friend, and fear that Lila’s “beauty would explode like a star and everyone would scramble to grab a fragment of it.”

Despite being trapped in a sham marriage toiling away at a grocery store, Lila does manage to get what she wants. “If I want something, I just act like a whore,” she tells Lenu, in the best line of the night. She knows how to play not just men, but everybody, and she’s constantly shifting between personae to do it. On the way home from the party, she berates Lenu for inviting her and ridicules the other guests for their leftist political ideals. Her viciousness, meanwhile, certainly revs up Stefano’s proverbial car.

“They’re monkeys that piss and shit in the toilet instead of on the ground,” Lila says, turning to Lenu, effectively driving the knife in but to what ends, yet, remains unclear — other than the fact that Lila likes to smash things up for fun and then pull up a chair and watch the show. “You’re becoming the parrot’s parrot,” Lila warns Lenu, mocking her intellectual ambitions because, if Lila can’t have them, no one can. “You leave us alone in our shit, with our brains burning.” Between these two girlfriends on edge, it’s a riveting push and pull, but that one that will topple as Lenu begins to grow up, and outward from Naples.