Starz series Outlander has finished for another season with the next instalment already in the works. However, the season five finale titled Never My Love proved to be a harrowing watch. The show featured a horrific sexual assault on Claire Fraser (Caitriona Balfe), which saw the 20th century doctor retreating into herself to escape the horrors of her present.

Why did Claire Fraser go to the 60s in Outlander?

WARNING: This article contains spoilers from the Outlander season 5 finale

During these horrifying moments, Claire saw visions of herself inside a highly stylised world which looked like it was in the 60s.

She was imagining scenes of a Thanksgiving dinner with other characters including Jocasta Cameron (Maria Kennedy Doyle) and Murtagh Fitzgibbons (Duncan Lacroix) also there. 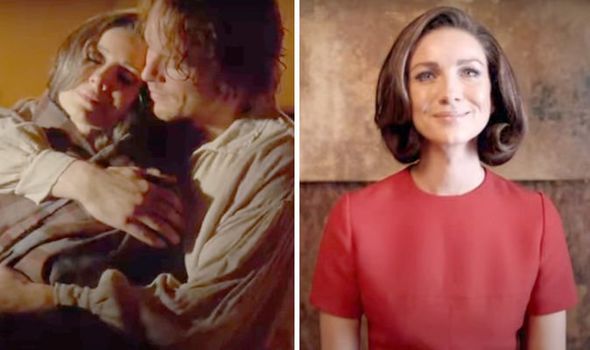 The visions represented Claire’s safe space with Jamie physically wrapping his kilt around her – much like he did in season one.

There was a lot of collaboration with the whole team, including Balfe and Heughan, who also now serve as producers as well as leading the series.

The cast and crew of Outlander shed further light on these scenes which writer Tony Graphia said was the “hardest episode ever to film”.

In a behind-the-scenes video from Starz, actress Balfe said: “There is quite a lot of rape in this books series and as a show and as actors, we all feel the responsibility of not taking those storylines lightly and approaching them with sensitivity.

“We worked so hard to make sure every single beat felt true and honest and respectful.”

Director Jamie Payne said he ensured in terms of the rape scenes the filmmakers only shot what they needed so it was never too explicit.

Payne said: “My responsibility as a director is making sure we don’t shoot anything we don’t need as far as the potential gratuitous nature of that violence.

“It’s very much a collaborative process with Caitriona. One of the things we talk about was how important it was not to empower the violence, literally staying with Claire and shooting the violence in a way – during the act of the rape – you can barely see it.

Graphia said the writers had done a lot of research and learnt many women disassociated as a “safety mechanism” in order to live through a moment like this.

The writer explained the 60s scenes, saying: “We thought one thing Claire might do is go off in her head to a different place.”

While Balfe added: “It is very much a psychological device that Claire has created to protect herself.”

The time zone in the dreamscapes were “non-specific” but had a 60s feel to them but ultimately became an amorphous era.

Elements of Fraser’s Ridge were brought into the visions including a painting Claire looks at in one sequence, which is an abstract piece of her home.

However, aspects of the assault and her kidnap were included through the leak in the ceiling and Lionel Brown (Ned Dennehy) appearing at the window.

Also, Claire’s worry at the back of her mind for Brianna (Sophie Skelton) and Roger MacKenzie’s (Richard Rankin) safety played out in these moments.

Claire was often seen looking at the two empty chairs at the dinner table and appeared concerned as she waited for their arrival.

Her fears about their fate manifested in the visions as well when Claire imagined two police officers knocking on her door and revealing the couple had been killed in a car crash.

Balfe concluded: “We really tried to do something respectful but we also tried to shine a light on the fact that even though Claire is this strong character, strength isn’t just bullishness, strength is vulnerability, strength is also experiencing pain and allowing yourself to be broken to a certain extent.”