Netflix dropped season three of Ozark recently with the Byrde family facing further pressures to deliver to the cartel. The new series saw cartel attorney Helen Piece (played by Janet McTeer) pulling the strings and trying to make sure the Mexican drug lords got their money. Helen really took things up a notch as fans got an insight into her backstory.

Helen had a messy and acrimonious divorce from her husband, who had moved on with a new lady.

However, the Chicago-based lawyer had bigger problems after she was tortured by Omar Navarro’s (Felix Solis) henchmen and they suspected her family might know about her shady dealings.The attorney gave constant assurances her family were in the dark about her line of work.

As season three went off, there was a widening gulf between Helen and the Byrdes as she started to make moves behind their back. 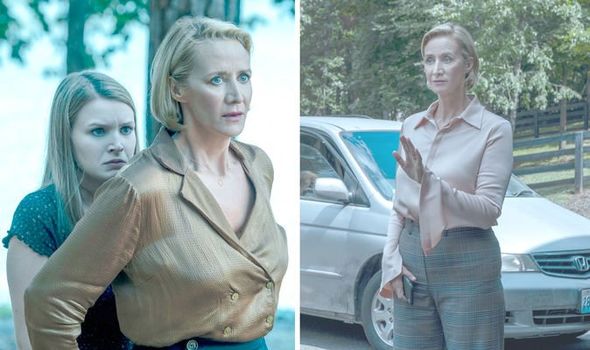 Most notably, she was vying to take over their business and have them bumped off.

There was a push and a pull between Helen and Wendy Byrde (Laura Linney), who suspected she was trying to steal their empire and get them killed off.

Just when it looked like Helen was going to take everything away from Wendy and Marty (Jason Bateman), there was another twist in the tale.

Helen was brutally killed off in the season three finale after she travelled with the Byrdes to Mexico supposedly for the christening of Navarro’s newborn son.

The couple were left reeling in shock as a grinning Navarro’s hugged the pair, who were covered in Helen’s blood and of gore after she was shot dead.

Speaking to Gold Derby, British actress McTeer confirmed she knew what her character’s arc was going to be.

She explained how season three was all about her character’s family life and how this came into play.

On taking on the role of Helen, the star said: I was being asked to play a really interesting, fun character that I hadn’t played before.”

McTeer continued: “I’d never played a lawyer for a drug cartel; I’ve never played somebody who was embroiled in that world before.

In a separate interview with Indiewire, McTeer reflected on her time starring in Ozark, saying: “Helen’s character, I think, is somebody who was asked to do this job, and she found the idea of playing against the law — playing against what is right, doing something really shady — I think she liked the secrecy of it.

When asked about her final scenes, McTeer wouldn’t be drawn, simply saying it was “tricky”.

From her words, it seems Helen’s departure from Ozark was a narrative one and part of the character’s arc rather than any decision to leave on her part.

Given the dangerous world of Ozark, anyone is in the firing line, but Helen’s death was truly shocking because she seemed almost untouchable.

When she was introduced in season two, she seemed so strong but in the latest series the cracks were starting to show.

Ozark season 1 to 3 are streaming on Netflix now