“Parasite” is celebrating its one-year anniversary this week in the best way possible: The U.S. publication of “Parasite: A Graphic Novel in Storyboards.” The 293-page book reprints Bong Joon Ho and Han Jin-won’s Oscar-winning “Parasite” screenplay alongside the hundreds of storyboards Bong drew to plan the direction of every scene in the movie, hence the “graphic novel” billing. The book also includes production stills and several pages of Bong’s illustrations and doodles for the film separate from the screenplay. The result is a fascinating new look at Bong’s creative process and a must-own for “Parasite” fans across the country.

“This book no way purports that storyboarding is an essential shortcut to making good films,” Bong writes in the book’s foreword. “I actually storyboard to quell my own anxiety. I only feel safe when I have all the shots of the day storyboarded in my palm. Whenever I go to set without storyboards, I feel like I’m standing in the middle of Grand Central Terminal wearing only my underwear.”

Bong adds, “The storyboards show in great detail how the shots will be constructed. They can be shot exactly as drawn and serve as valuable blueprints for the crew members. The finished film never deviates far from the storyboards, and this allows the crew to trust the process. Crew members who have worked with me in the past are especially aware of this.”

To mark the May 19 publication of “Parasite: A Graphic Novel in Storyboards,” IndieWire is excited to exclusively debut five storyboards from the book below. These particular storyboards map out a climactic scene in which the Kim family’s sub-basement apartment is flooded during a torrential downpour. The pages not only include dialogue and illustrations, but also notes from Bong on the camera movements to feature in each shot. “Parasite: A Graphic Novel in Storyboards” is available to purchase on Amazon, Google Play, Barnes & Noble, Kobo, Apple Books, and EBooks.com. Visit Grand Central Publishing’s website for purchase details.

Check out Bong Joon Ho’s exclusive storyboards below. All images are excerpted from “Parasite: A Graphic Novel in Storyboards” by Bong Joon Ho. Copyright © 2019 by CJ ENM CORPORATION, BARUNSON E&A. Reprinted with permission from Grand Central Publishing. All rights reserved. 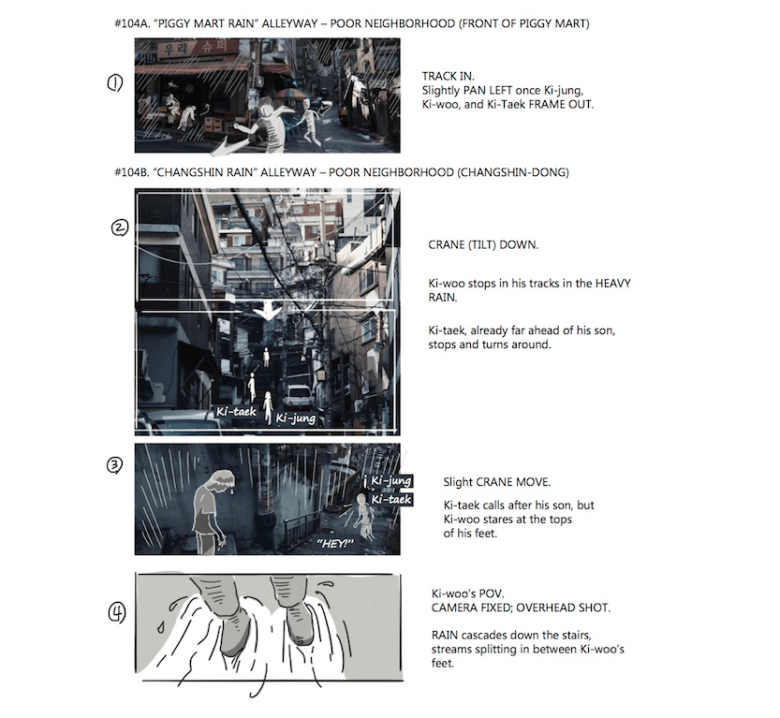 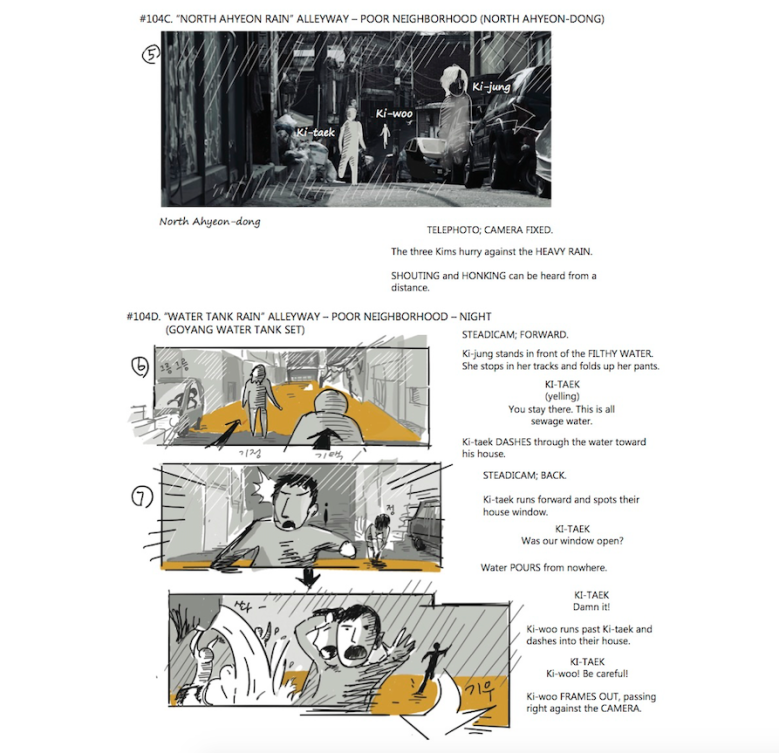 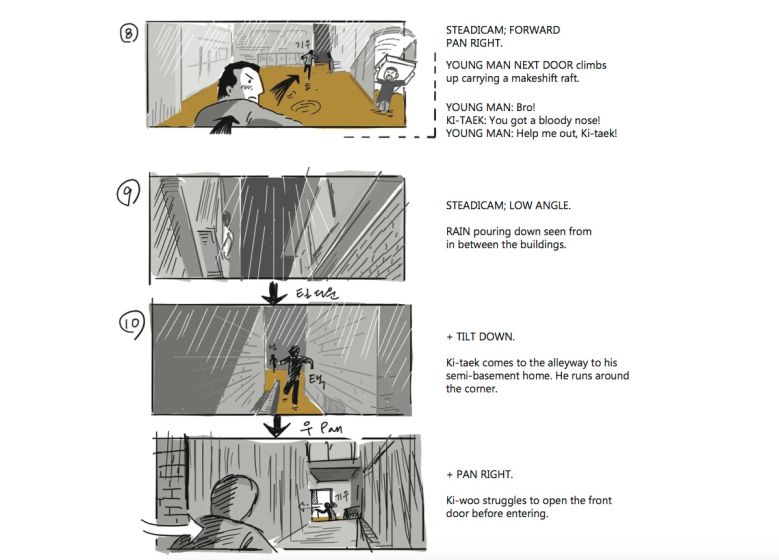 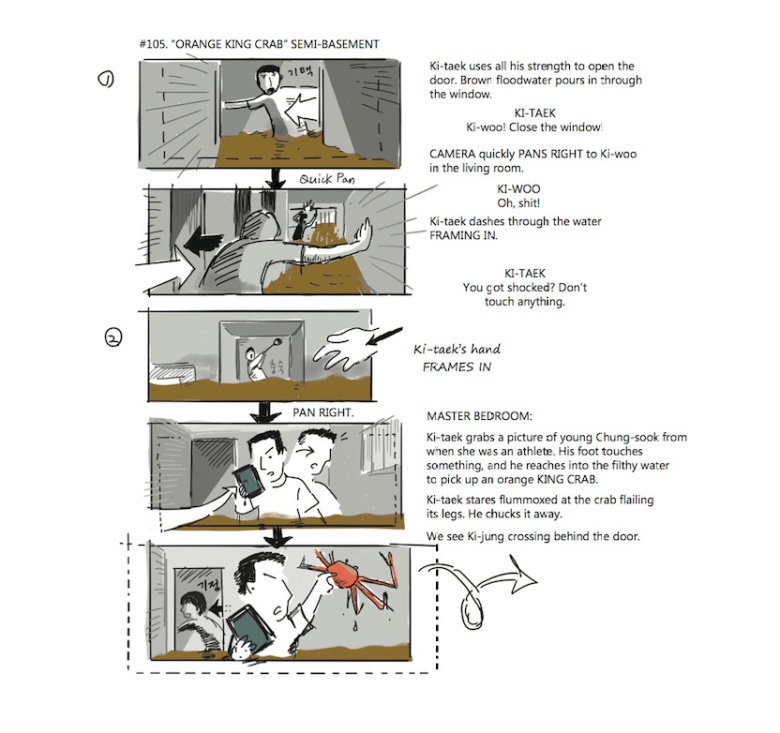 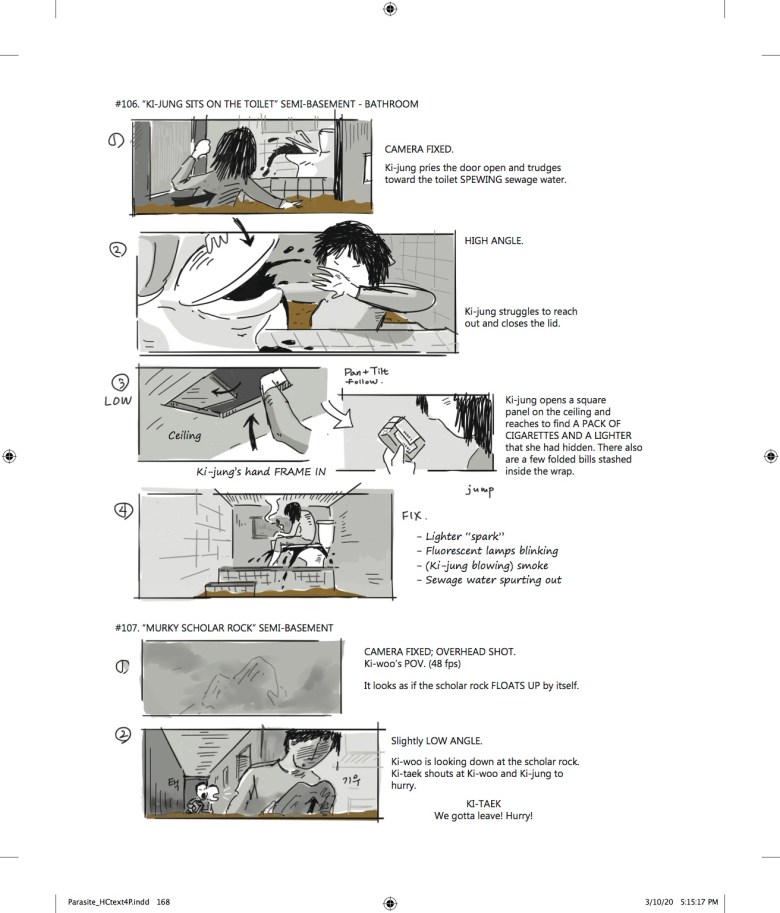