James Martin had This Morning viewers no doubt feeling a little queasy as he likened squeezing roast garlic to popping a pimple and, well, Phillip Schofield’s face said it all.

The celebrity chef, 48, appeared on Monday’s broadcast of This Morning, where he was seen making various dishes, including a sausage supper that required garlic.

James shared a seasoning hack as he told viewers to roast a bulb of garlic and to the squeeze everything out of it once it was ready to throw in with the other ingredients.

As he demonstrated, James commented on the visuals it created and said that it wasn’t a far cry from watching a scene play out on Dr Pimple Popper – a series that follows dermatologist Dr Sandra Lee.

‘This is roast garlic, take a whole bulb of garlic, chop the top off and roast it in the oven for 45 minutes. It looks like something you’d find on a YouTube channel,’ he said.

Horrified, host Phil was quick to ask: ‘What the hell are you looking at on YouTube?’ 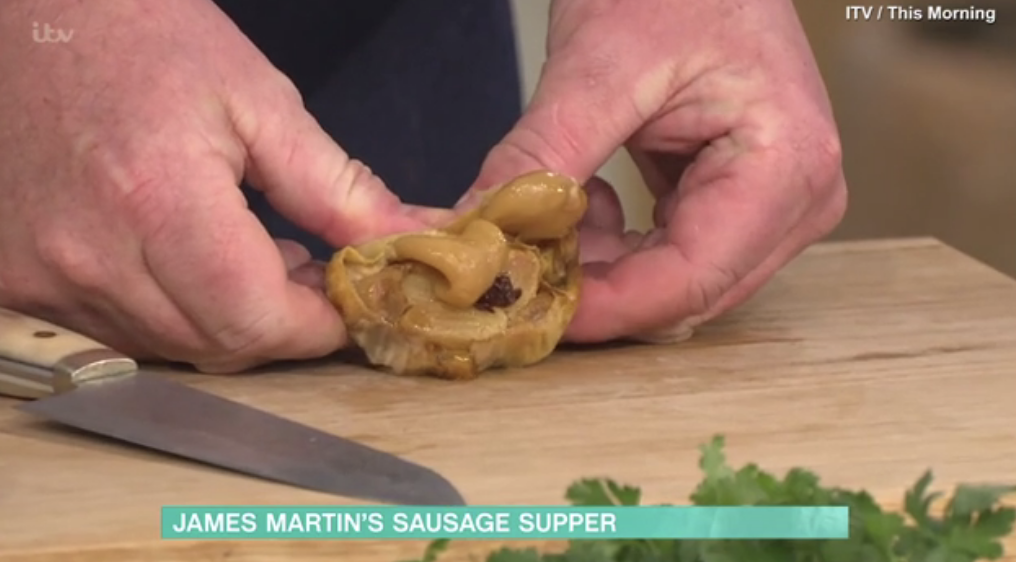 It’s safe to say he soon regretted it as James replied ‘that pimple thing’ and Phil looked like he was going to be sick.

‘Oh god,’ he cried while grimacing his face and sighing in disgust, probably unable to look at garlic in the same way ever again and, tbh, we don’t blame him.

Luckily for him, it didn’t put Phil off James’ sausage dish as he and Holly were seen tucking into it and said it was ‘delicious’ – even if Holly was horrified by the amount of butter James had used throughout his recipe.

Asking the chef if it was totally necessary to use as much butter as he had, James fired back: ‘Yes. You just need to ignore that fact and enjoy it.’

He teased: ‘We’ve been through enough as a country, just enjoy yourself.’

When James joked that he’d be doing a ‘low-fat piece next week’, Holly seemed to have a change of heart, as she replied: ‘Don’t ever do that or we will be disappointed.’

Former Saturday Kitchen host James out together a sausage and bean cassoulet live on air, which saw him use store cupboard essentials to create a gourmet family meal.

This Morning airs weekdays from 10am on ITV.