Home » TV and Movies » QAnon in Meltdown After Biden Inauguration: 'We Need to Get to Go Back to Our Lives'

QAnon in Meltdown After Biden Inauguration: 'We Need to Get to Go Back to Our Lives'

“We gave it our all,” de facto leader Ron Watkins tells followers 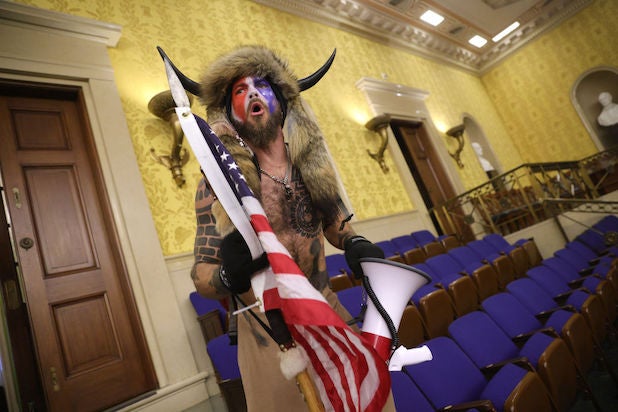 Jake Angeli, a QAnon conspiracy theorist, breaks into the Senate chamber during the insurrection at the U.S. Capitol. (Photo by Win McNamee / Getty Images)

Joe Biden took the oath of office today and is now the 46th president of the United States, which means the apocalypse that Trump-supporting QAnon cult predicted would prevent him from doing so failed to happen.

And well, they’re really not handling it well now that de facto leader Ron Watkins himself threw in the towel on Wednesday shortly after the inauguration. “We gave it our all, now we need to keep our chins up and go back to our lives as best we are able,” Watkins said in a message board post. “We have a new president sworn in and it is our responsibility to respect the Constitution.”

Watkins was a former administrator of the 8kun (formerly 8chan) message board and both he and his father are suspected of being Q, the as-yet-unidentified creator of the movement, so it’s a sign of defeat that he’s asking supporters to stand down.

One of QAnon members’ main theories was that a biblical rapture of sorts or “storm” would rain down on the country during the inauguration at noon on Wednesday —  when forces amassed by Trump would appear to arrest Biden and other Democrats on live TV while Trump would be sworn in for a second term.

But Biden’s inauguration has left Trump supporters and members of the QAnon cult confused and angry, as the “new world order” they predicted would be ushered in failed to appear.

“This will be remembered as the greatest day since D-Day, historians will be writing about this for centuries,” one QAnon member using the alias Bubba1776 said in the QAnon message board, captioning his post “the Storm Hits in 45 minutes, Victory at last!”

The QAnon conspiracy theory began on the anonymous chat board 4chan, but now adherents generally network on a fringe message board called 8kun (formerly 8chan). QAnon supporters believe, without evidence, that Democratic politicians and their allies are running a pedophilic, Satan-worshipping cabal across the globe, while President Trump and his allies are fighting to stop it.

The QAnon cult has spurred numerous violent acts, including the insurrection at the U.S. Capitol building on Jan. 6, which caused five deaths and resulted in hundreds of arrests.

The insurrection was planned in part on QAnon message boards, and fueled by Trump encouraging his supporters and “patriots” to “stop the steal” of the 2020 election based on his unsubstantiated, widely discredited claims that he had in fact won re-election. Many QAnon fringe theorists including Jake Angeli, known as the “Q Shaman,” attended the Capitol riot.