If ever there were an actor fit to portray an alien posing as a medical professional, that man is Alan Tudyk.

Adapted from the Dark Horse comic of the same name (and premiering Wednesday, Jan. 27, at 10/9c on both Syfy and USA Network), Resident Alien follows an extraterrestrial (Tudyk) after he crash-lands on Earth and assumes the role of a small-town human doctor named Harry Vanderspeigle. Though the alien’s original mission is to kill Earth’s inhabitants and destroy the planet, Harry gets sidetracked when he’s mistaken for a physician and roped into solving a local murder. He soon learns that in order to survive his strange new elements, he needs to assimilate into society. So he builds bonds with the fine folks from Patience, Colo., which leads to heaps of otherworldly shenanigans (which Tudyk knocks out of the park).

“I loved the script right away,” Tudyk tells TVLine, while discussing his preparation for the oddball roll. To say that alien Harry struggles with normal societal conventions, let alone speaking the English language or earning his fellow townspeople’s trust, is an understatement.

“The scene where he’s learning how to speak as a human and he’s watching Law & Order and getting it wrong… that was immediately exciting for me, because I knew he’d have to learn everything,” says Tudyk. “When I did Sonny in I, Robot, all of these questions were answered for me back then. Like, how would a robot speak and how would a robot move? The alien is approaching being a human in the same way: How would you move with the most ergonomic efficiency in this form?”

Tudyk also says that putting on his otherworldly costume is both a challenge and a performance booster. The mask and suit, created by Bill Terezakis (The X-Files, Bates Motel) and enhanced with a 2-D digital overlay in post, takes a few hours to don. Yet, despite it being “a little tough,” Tudyk feels the extraterrestrial garb helps everything click into place.

“It’s almost like there’s a little more ease in the character,” the actor notes. “He’s not hiding as much. He’s still Harry, but even though there’s less expression in the mask, I can almost have more expression as the alien talking with Max.” 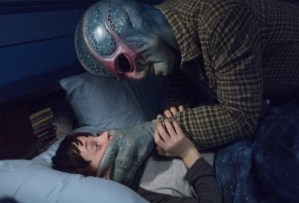 That “Max” Tudyk mentions is Harry’s first and youngest foil. Played by Judah Prehn, the 10-year-old is the only Patience resident who can see Harry for what he really is: a bug-eyed alien who’s clearly not from this planet.

“Max gets the best of Harry all the time. And he gets a friend, Sahar — who cannot see Harry as an alien, but believes Max — and the two of them gang up on me!” Tudyk says, laughing. “Ultimately, Max and Harry get to a place where nemeses get to. There’s a mutual respect of the fight as the series goes on. Like Professor X and Magneto… I think I’m Magneto? Whatever, he’s a really cool character in that analogy,” he jokes.

Over the course of the series, Harry develops from a villain into something a little more evolved, which may or may not put his original mission in jeopardy. His interactions with people like nurse Asta Twelvetrees (Sara Tomko, Once Upon a Time), bartender D’Arcy (Alice Wetterlund, People of Earth) and Mayor Ben Hawthorne (Levi Fiehler, The Fosters) eventually start to weigh on him. “When he takes on the human form, he starts to find out pretty early that he’s feeling things and sensing the world with our spectrum of senses,” says Tudyk. “It starts to affect him. He starts to, in a true sense, know what it’s like to be human.”

As for how Harry’s newfound empathy will affect his murderous mission exactly, viewers will have to wait for that answer to unravel throughout the season. But, teases Tudyk, one of the townies will learn the truth about his identity by season’s end.

“Someone in town is going to learn he’s an alien,” he says. “Naybe even more than one person.”

Will you be watching Tudyk in action in Resident Alien? Drop your thoughts in the Comments below!