What that means for Toni and Cheryl’s future, we don’t know 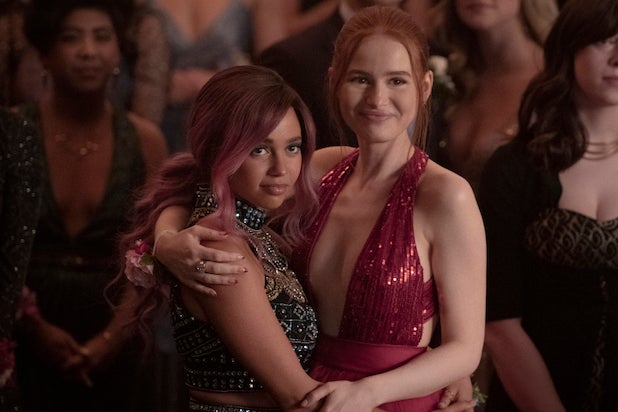 The “Riverdale” cast will be growing in Season 5, thanks to the real-life pregnancy of actress Vanessa Morgan.

Morgan, who plays Toni Topaz on The CW drama, revealed on Instagram over the weekend that “Riverdale” showrunner Roberto Aguirre-Sacasa is writing her pregnancy into the show — but not what that means for Toni and her girlfriend, Cheryl (Madelaine Petsch).

“Officially on maternity leave!!!! Ahh!! Feeling grateful to my showrunner & producers for being so accommodating & writing my pregnancy into the show!” Morgan captioned a photo of her with her baby bump. “Also proud of my body for allowing me to still work almost 9 months preggo. Now time to have a baby!  lol Happy Holidays everyone “

A representative for The CW confirmed to TheWrap that Morgan’s pregnancy will be written into the fifth season.

“Riverdale” Season 5 is expected to feature a time jump that will take Archie Andrews (K.J. Apa) and his friends past their college years. When we last left them in Season 4, which came to a premature end due to the pandemic, they were wrapping up their senior year at Riverdale High. When the series returns in January, we’ll find out how the high-school storyline wraps up before “Riverdale” skips ahead several years.

Toni and Cheryl (a.k.a. Choni) are currently together in the *present-day* storyline on “Riverdale,” but if the show is incorporating Morgan’s pregnancy into its fifth season, that could mean either a split or a very big commitment is coming for that particular couple in the not-so-distant future.

Readers can watch the “Riverdale” Season 5 trailer here. That preview of the fifth-season premiere shows Cheryl, Toni, Archie, Betty (Lili Reinhart), Jughead (Cole Sprouse) and Veronica (Camila Mendes) attending their senior prom, which might not turn out to be the happiest of affairs.