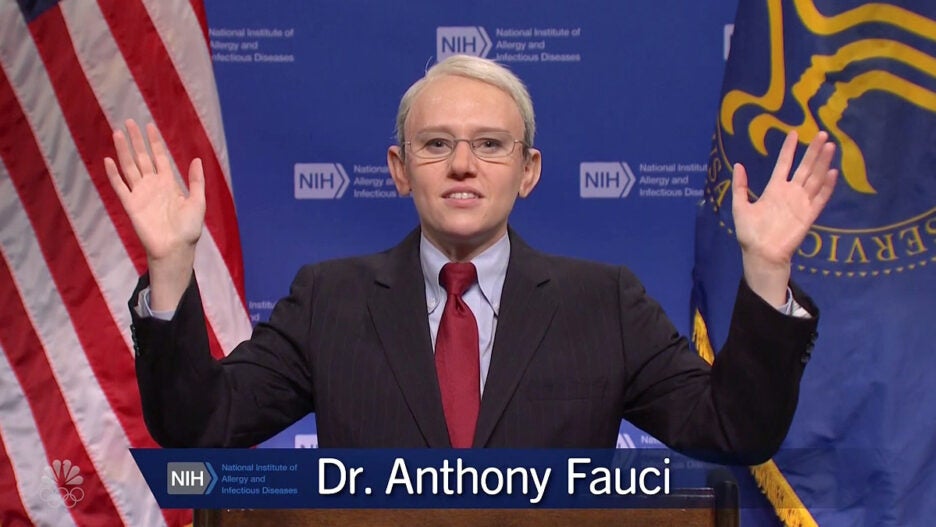 In the cold open of the latest “SNL,” Kate McKinnon appeared as Fauci to explain the confusing (sorry but they are) new CDC mask guidelines. Unfortunately, McKinnon’s Fauci decided that “to clear things up, I found a few doctors at the CDC who minored in theater.”

The result was a series of bad sketches in which CDC personnel attempted to explain the new guidelines but instead conveyed the exact wrong messaging. Then again, that’s kind of like real life when you think about it.

So first was an attempt to explain how the rules apply to bars and restaurants via a sketch called “Man Walks Into a Bar.” That sketch featured a man played by Beck Bennet trying get into a bar and Aidy Bryant as the bar hostess explaining the bar’s mask policy. But when the guy admitted he isn’t vaccinated and refused to wear a mask, he explained that “it’s 11 AM,” so it’s really on the bar for thinking he’s the kind of person who would get vaccinated.

Next, a sketch where Bowen Yang played an airplane passenger and Ego Nwodim played a flight attendant. Unfortunately, the CDC messaging devolved into a sketch about how badly people want to have sex after a year in quarantine.

This was followed by Cecily Strong and Alex Moffat pretending to be people who were outside. “I’m concerned. This is a pretty large gathering. Should we be wearing masks?” asked Moffat.

“We don’t have to because we’re outside… the Capitol building. Now, come on, let’s get em,” Strong said, revealing that the bad CDC sketch was depicting Jan. 6 insurrectionists.

“That was a very specific example, but accurate in terms of masks,” McKinnon’s Fauci quipped.