Home » TV and Movies » ‘Something in the Dirt’ Review: The Truth Is Over There, by the Sofa

‘Something in the Dirt’ Review: The Truth Is Over There, by the Sofa 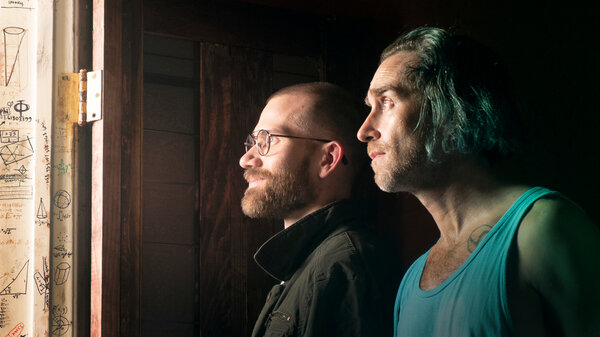 “Something in the Dirt” is one of those weird little surprises sometimes found skulking in the crannies of mainstream film festivals, slippery and screwy and impossible to categorize. An ambitious potluck of buddy comedy, paranormal puzzle and whatdunnit mystery, this fifth feature from the filmmaking team of Justin Benson and Aaron Moorhead cheerfully substitutes audacity for discipline.

A doomy vibe descends immediately as Levi (Benson), a feckless bartender with a sketchy past, moves into a decaying apartment in the Hollywood Hills. Low-flying aircraft rumble overhead and a forest fire belches smoke on the horizon. Inside, there’s a creaking door that won’t close, a dripping ceiling (shout-out to Yah’el Dooley’s excellent sound design) and arcane equations scribbled on a closet wall. Levi’s mood lifts, though, when he meets his new neighbor, John (Moorhead), a recently divorced former math teacher. The two form an instant connection, despite John’s apocalyptic religious views and his apparently blood-spattered shirt.

Written by Benson and shot by Moorhead, “Something in the Dirt” is a surreal satire of paranoia and conspiratorial thinking, suggesting both as logical responses to an increasingly scary world. When the friends, hoping for fame and fortune, decide to document what they believe to be supernatural phenomena — a levitating quartz ashtray, a plant that spontaneously grows strange fruit — their obsession with re-enactments digs slyly at the distortions of nonfiction filmmaking. Rambling conversations on aliens and math theorems, time travel and TED talks, contribute to an atmosphere in which everything feels unstable, not least the men’s sanity.

Overlong and overwritten, “Dirt” nevertheless unfolds with an enjoyably comic quirkiness, a tale of two doofuses who sought meaning in symbols and found comfort in friendship.

Something in the Dirt
Rated R for a little violence and a lot of crazy talk. Running time: 1 hour 56 minutes. In theaters.