John Williams is the greatest movie score composer of all time. One of his most iconic themes is Jaws, which is saying something. It’s a very simple composition; however, it is quite effective. Still, Steven Spielberg thought Williams was joking when he first heard the Jaws theme and even laughed. Fortunately, Spielberg found a way to use this theme to his advantage and the rest is cinematic history.

In Jaws, the theme is used as a way of indicating the location of the shark. The beginning of Jaws begins with the shark’s point of view as it swims through the ocean. The theme gets louder and more violent before it cuts away. Throughout the film, the speed and volume of the theme become an indicator of how close or how far away the shark is.

In a Jaws making-of DVD featurette, shared by The Hollywood Reporter, Williams said this was intentional and Spielberg used it as a way of surprising audiences or building suspense.

“You could alter the speed of this ostinato; any kind of alteration, very slow and very fast, very soft and very loud,” Williams explained. “There were opportunities to advertise the shark with music. There are also opportunities when we don’t have the music and, the audience has a sense of the absence. They sense the absence because they don’t hear the ‘dun dun’ because you’ve conditioned them to do that.”

This is true in many instances throughout Jaws. For example, when Martin Brody (Roy Scheider) is dumping fish guts into the ocean and the shark pops out of the water, it catches audiences off guard because there had been no music.

In the same featurette, Spielberg explained that he initially thought Williams was joking when he first heard the theme. Spielberg explains that he was expecting something weird and otherworldly and was surprised by the simpleness of what Williams had composed.

“I expected to hear something kind of weird and melodic, something tonal, but eerie; something of another world, almost like outer space under the water,” Spielberg said. “And what he played me instead, with two fingers on the lower keys, was ‘dun dun, dun dun, dun dun.’ And at first, I began to laugh. He had a great sense of humor, and I thought he was putting me on.”

Spielberg recognizes that Jaws may not have been the box office smash it is without Williams’ score. The theme remains iconic to this day and Jaws is still a timeless classic.

Spielberg later said, “I think the score was responsible for half of the success of that movie.” 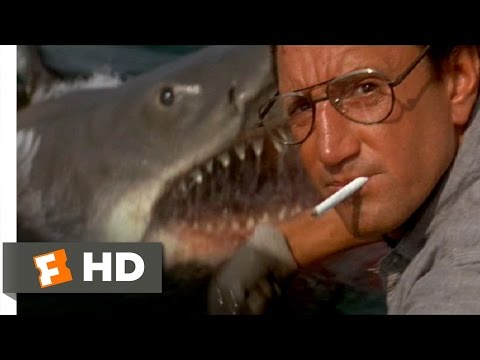 Initially, Spielberg wanted to show the shark way more in Jaws. However, the animatronic shark, named Bruce, kept malfunctioning and was “high-maintenance”, according to Mental Floss. Due to this, Spielberg had to keep the shark hidden and build suspense by not showing the shark.

“I had no choice but to figure out how to tell the story without the shark,” Spielberg said. “So I just went back to Alfred Hitchcock: ‘What would Hitchcock do in a situation like this?’ … It’s what we don’t see which is truly frightening.”

Jaws often gets constant praise because Spielberg decided to direct the film in a way that kept the shark hidden. The audience now builds up an image of what the shark looks like, creating suspense through the viewer’s imagination. With Williams’ theme, audiences are now horrified by the shark without even seeing it. Thanks to the shark malfunctioning, Spielberg accidentally changed how directors can create tension.