Home » TV and Movies » Supernatural Spinoff About Young John and Mary Winchester, From EPs Jensen and Danneel Ackles, Eyed at The CW

Supernatural Spinoff About Young John and Mary Winchester, From EPs Jensen and Danneel Ackles, Eyed at The CW

Less than a year after Supernatural wrapped up its 15-season run, The CW and original series star Jensen Ackles are eyeing an expansion to the franchise with The Winchesters. The network is developing the prequel spinoff about Dean and Sam’s parents, young John and Mary Winchester, with Ackles and his wife Danneel Ackles attached to executive-produce.

Per our sister site Deadline, the potential offshoot — which has a script commitment — is described as the epic, untold love story of how John met Mary, and how they put it all on the line to not only save their love, but the entire world. Jensen Ackles will narrate from the point of view of Dean, who is of course John and Mary’s eldest son. One-time Supernatural co-executive producer Robbie Thompson will pen the project, which hails from the Ackles’ Chaos Machine Productions and Warner Bros. Television.

“After Supernatural wrapped its 15th season, we knew it wasn’t over. Because like we say in the show, ‘nothing ever really ends, does it?’,” Jensen Ackles said in a statement. “When Danneel and I formed Chaos Machine Productions, we knew the first story we wanted to tell was the story of John and Mary Winchester, or rather the Supernatural origin story. I always felt like my character, Dean, would have wanted to know more about his parents’ relationship and how it came to be. So I love the thought of having him take us on this journey.” 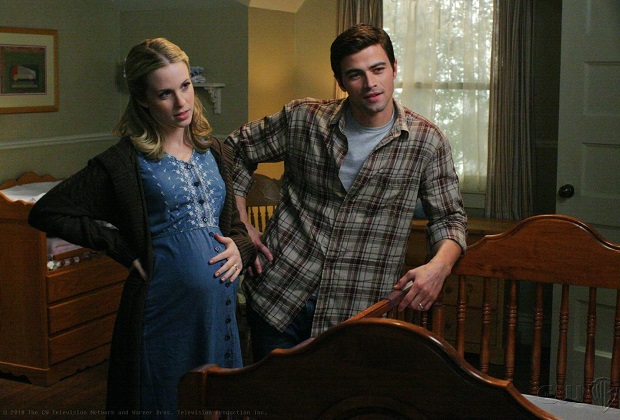 John and Mary were portrayed on Supernatural as young adults by Matt Cohen and Amy Gumenick, while Jeffrey Dean Morgan and Samantha Smith played John and Mary as grown-ups. (It is unclear if Cohen and Gumenick will reprise their roles or if the characters will be recast.)

The Winchesters marks the third attempt to spin off Supernatural: The backdoor pilots Bloodlines and the female-centric Wayward Sisters both failed to get series orders.

Supernatural isn’t the only veteran CW series seeking an encore: Smallville’s Tom Welling said this week in a Cameo message to a fan, “Michael Rosenbaum [who played Lex Luthor] and I are actually working on an animated series to bring those characters back to life, and use as many of the original cast members as possible” — though he offered no further details.

Supernatural fans, would you watch a show about John and Mary’s love story? Hit the comments with your thoughts!