The Chase: Anne Hegerty hits back at Bradley Walsh’s jibe ‘I’m ignoring you’

The Chase was back with another new episode and today, Bradley Walsh was joined by Stephen, Charlie, Laura and Eilis. As for who was sitting in the Chaser’s chair, it was the turn of Anne ‘The Governess’ Hegerty. Before the game had even begun, Bradley had made a jibe about the quiz brain and when he challenged her on it, she simply refused to talk to him.

As with every instalment, before the Chaser is announced, Bradley introduces them one by one with a little antidote to accompany.

“Could it be The Vixen?” Bradley began. “She gets in free to football matches especially if the pitch needs drying or thawing out.

‘Could it be The Beast? He makes the statue of Liberty look like a little girl holding a Cornetto!

“Maybe we’re playing The Sinnerman, not so much the cat that got the cream, more has inherited the dairy. 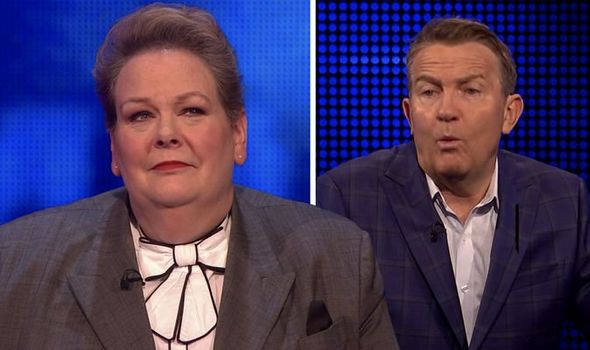 “She’s got a big vinyl collection. Not records. Thigh-length boots.

“Or is it The Dark Destroyer? I’ve seen more hair on a head of lettuce.

“Who do you want to take on?” The host asked Stephen, the first player.

“I’d love to take on Shaun,” he replied.

“Time to bring on the Chaser! Woah not the Dark Destroyer, here she comes, the Queen of Quiz herself, everyone. 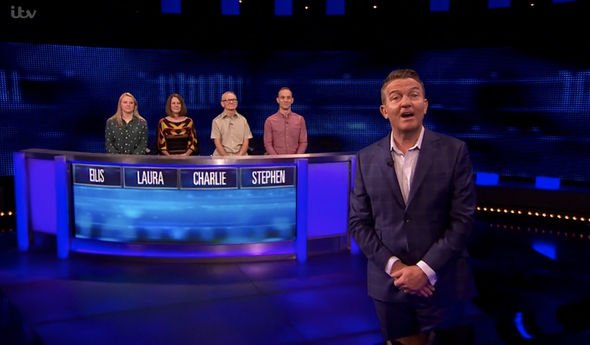 “Gone very chilly in the studio, it’s The Governess,” as Anne walked out of the tunnel and took her seat.

Those watching at home then saw the game start, and Anne offered Stephen a whopping a high offer of £30,000.

After answering a whopping seven questions correctly, and despite his teammates suggesting he stay safe with £7,000, the player wanted to take a risk. 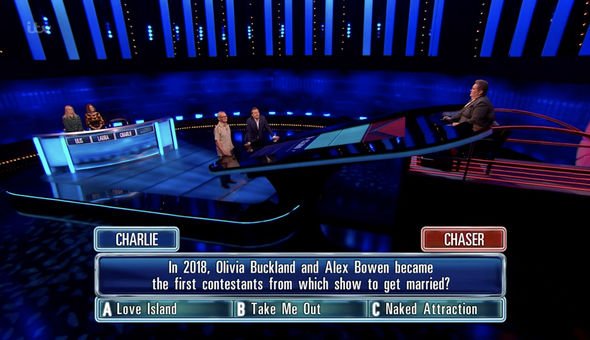 But his knowledge wasn’t great enough and Anne soon closed the gap.

Charlie took to the podium next and he managed to answer three questions correctly.

Despite a tough round, he made it back to his teammates and the it was Laura’s turn.

After discussing her job title, when she faced Anne at the table, the chaser hit out.

“I do branding too,” she remarked. “And I brand you a loser!”

Shocked by her joke, Laura replied: “That’s a bit harsh.”

And Bradley stepped in to explain: “That’s what they do, they try to intimidate.”

It seems Anne’s tactics worked, because Laura was also eliminated from the game.

Eilis was the final player to take on Anne and she stuck with the £4,000 she accumulated in the cashbuilder.

To find out details of coronavirus in your area, please fill in your postcode below.

But luck was not on her side, and Charlie was left to go into the final round, alone.

He only managed five steps ahead, and it wasn’t long before the third best female player on the planet had caught him.

“You are the one who got through, all the others went out. So, well done,” Anne remarked.

The Chase airs weekdays at 5pm on ITV