That angle, long a staple of food TV, is also found in Season 4 of “The Chef Show,” the Netflix cooking series co-hosted by acclaimed Los Angeles food fixture Roy Choi and writer/director Jon Favreau. Instead of building the show on artifice and impeccable presentation, Favreau and Choi continue to usher the viewer through a breezy set of kitchen basics, with these latest five episodes centering on the pair’s private setup and the various buzzy L.A. food venues.

It helps that these episodes don’t engage in any lengthy preambles about the chef in the spotlight. Over the previous three seasons, “The Chef Show” — with Choi’s imprimatur — has already built a reputation that whatever dish is on display is worth your time. Some of the episodes get into other parts of these restaurant’s respective endeavors, but this season consciously doesn’t pass the boundaries of the food prep area. You barely hear the words “Milk Bar” or “Tartine,” if at all. As a result this show feels less like an ad for high-profile dishes than a study of them. (Though by avoiding giving these restaurants the full documentary treatment, it can largely avoid having to delve into the financial and managerial sides of some of these places.)

Favreau, who started the show as a way to dig into some of the dishes that inspired his 2014 movie “Chef,” is right in that sweet spot for potential surrogate for audience members without much experience working with ingredients like fennel pollen. With as much on-screen guidance from food world authorities like Choi, at this point he’s approaching professional enthusiast status, which also helps the flow of the show.

“The Chef Show” benefits from having both Favreau and Choi as good conversation facilitators. In particular, Favreau does a solid job balancing his evident desire to not look foolish in front of renowned chefs with an acknowledgment of his own inexperience. He’s also observant enough to point out the areas where intuition does or doesn’t line up with quality (or where commonly held assumptions about baking or roasting might lead to subpar dishes). 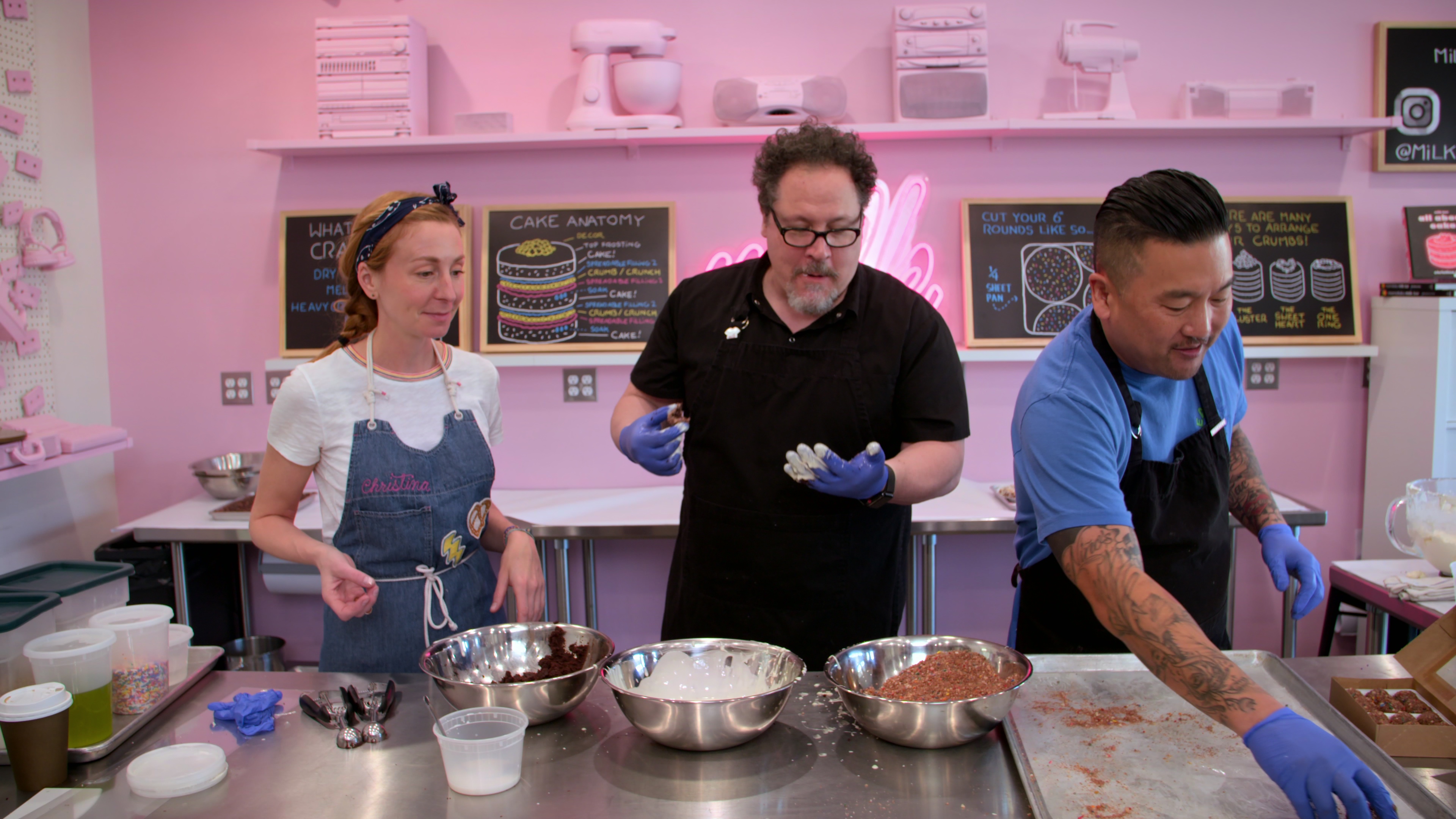 “The Chef Show” has found a way to both be incredibly efficient in its runtime and extol the virtues of patience. There’s obviously no way for a half-hour episode to fully capture the painstaking work it takes to produce everything from an ideal cake batter or brown onions for a tasty salsa. But the show isn’t ignorant of it either. Some of the longer idle wait times are excised from the process, offering some casual conversation instead. There’s also an effort made to show how some of these meal pairings can be made in concert with each other. It’s a culinary juggling act, with experts guiding someone who’s still figuring out what his arms can do.

The element of “The Chef Show” that offers the most comfort is its insistence on showing as many steps in the process as it can. Favreau and Choi obviously approach each dish with differing degrees of familiarity, but there’s room for each of them to stumble a bit. An errant garlic clove here, a few sticky lasagna noodles there: none of these end up being insurmountable mistakes. Even as the show is arguing that fine food is a delicate dance of precision, it also acknowledges that there’s always some wiggle room along the way.

Of course, there’s a dash of aspiration in “The Chef Show,” too. It doesn’t pretend that what you see is always possible in the average viewer’s kitchen setup. They’re straightforward about when their recipes involve elaborate oven set-ups or tools imported from other continents. What the show does emphasize is that those fancy accoutrements are no substitute for trial and error. We don’t see the years of refining that got these methods to Beard Award heights, but professional knowledge does come across in prep tasks as simple as scoring a loaf of sourdough before it heads into the flames.

And there are the subtler, cross-episode nods to the concept that the ingredients themselves are malleable. Basil goes from careful handling to a forceful rub. You can almost see Choi recalibrating his own thoughts on specific techniques and ideas when faced with a tasty end result. (It’s also really fun to see when something gets him excited enough to pull out his phone and start snapping pictures.)

Amidst a handful of other food shows on Netflix that find arbitrary ways to build labyrinthine cooking challenges or offer a hyperstylized view of the day-to-day work of being an esteemed voice in the world of food, “The Chef Show” strips away a lot of that artifice to get at the loose rhythms underneath. The Stoopid Buddy-crafted stop motion transitions (those deconstructed dish visualizations make the perfect intro for each segment) offer a sense of structure and playfulness without being too formulaic. The freedom to hop between kitchens, toss in a dessert, or take a few extra seconds to dispense some knowledge about proper vegetable-chopping technique keeps “The Chef Show” moving and adjusting to whatever unexpected developments might pop up. Like any great chef, it’s a show with a confidence in its craft and a willingness to embrace new flavor.

All four volumes of “The Chef Show” are now available to stream on Netflix.