Home » TV and Movies » 'The Office': Jenna Fischer Reveals the Heartbreaking Pam and Jim Moments That Made Her Cry

'The Office': Jenna Fischer Reveals the Heartbreaking Pam and Jim Moments That Made Her Cry

Fans of The Office have found the comedy series to deliver laughs but also, from time to time, some tears too. During various Office Ladies podcast episodes, star Jenna Fischer, who played Pam, dished on some of those more emotional moments between Pam and Jim (played by John Krasinski) that made her cry and broke her heart. 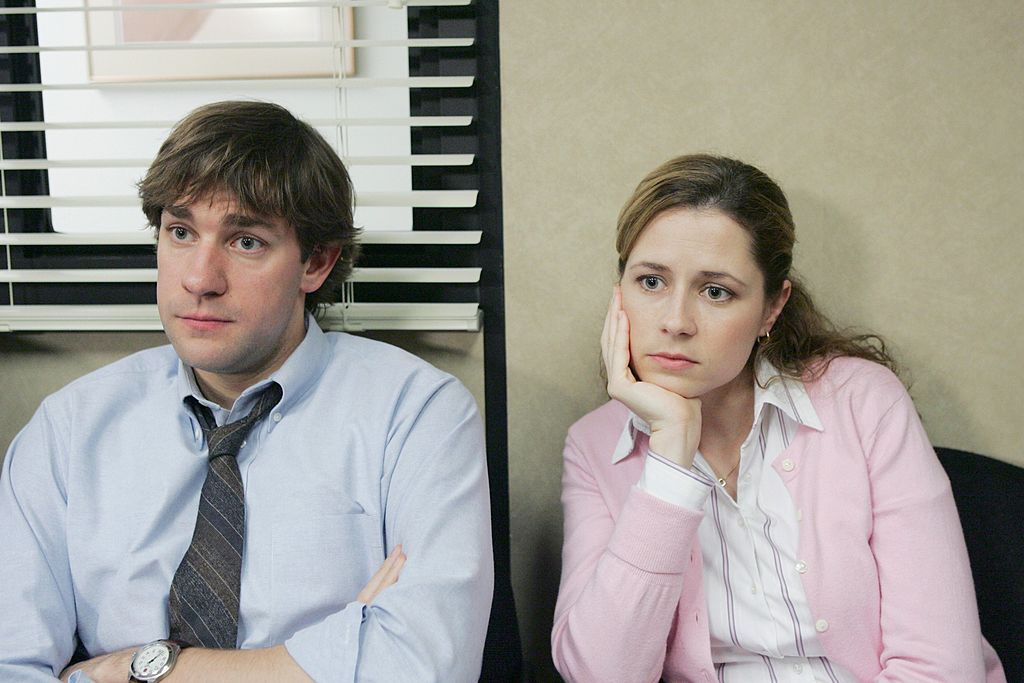 Pam and Jim’s relationship developed over the series

Viewers were taken along for the ride of two office workers who were friends who had romantic chemistry. In the early seasons, that was complicated by the fact that Pam was engaged to Roy. Jim finally got the nerve to profess his love for Pam in the season 2 finale, only to be shot down by Pam… but the couple finally shares a kiss at the end of the episode.

The relationship was a roller coaster for fans, who were happy to ride the ups and downs toward the couple getting the happily ever after they deserved.

‘The sweetest of sweet moments’

After the two characters spent most of the episode apart,something touching happens right at the end. When Jim leaves for the day, hestops at his desk and finds that Pam has left him 7 voicemails.

“This whole episode we’ve given you no indication that Pamis clocking Jim in any way, but Jim walks to his desk, he sees the littlemessage light flashing, and he plays his messages,” Fischer explained.

She continued, “Pam has left him 7 voicemails all about her day… and you see him kind of walk to his car as these messages play.”

Not a bad day. ❤️ #TheOffice

RELATED: ‘The Office’: Jenna Fischer Said This Michael Scott Scene ‘Hit Me So Hard’ Because It Was So Sad

The scene that made Fischer cry

On the March 25 Office Ladies podcast, co-stars Jenna Fischer and Angela Kinsey did a deep dive into the “Boys and Girls” episode where Jim hurts Pam’s feelings.

Fischer recalled Jim and Pam’s first fight in season 2, episode 15, called “Boys and Girls.” Jan visits the Scranton office for a “Women in the Workplace” seminar and encourages Pam to pursue an internship.

Pam gets support from Jim but not her fiancé Roy, and Jim throws a bit of shade about how Roy disregarded Pam’s interest in the internship. “This episode is Jim and Pam’s first fight,” Fischer shared. “It’s a real fight.”

Fischer said she shed real tears in the episode. “We go backto the talking head and Pam just breaks down,” she explained. “She’s talkingabout the terrace, but we know what she’s really talking about. She says ‘it’sjust not practical’ and ‘you’re not going to find that,’ and what she’s reallysaying is, ‘I’m never gonna have Jim. I’m never gonna have true love. I’m nevergonna be who I want to be.’”

“Guys, there are times as an actor where your heart justbreaks for your character. I just felt her heart breaking and it made my cry,”Fischer said of tapping into the emotion of the scene.

“I wasn’t thinking about my dead pet or something like that. I was thinking about how it must feel to have someone not encourage you, to feel trapped, and to feel so alone. And I thought about how the one person who was trying to help me I just pushed that person away,” she added.

This week on @officeladiespod we are talking about the Christmas Party episode! Teapot and temper tantrums. We tell all. #teapotnote (Link in bio!)

‘My heart dropped into my stomach’

One of the most emotional scenes to play out between Jim and Pam happened in the season 2 episode “Casino Night.” During the Office Ladies’ May 13 podcast, Fischer shared how emotional the scene in the parking lot was, as Jim finally confessed to Pam, “I’m in love with you.”

Pam rejected Jim, saying that she “can’t” because she’s engaged. When Krasinski improvised the line “Don’t do that” as Pam says his friendship is important to her, Fischer explained how heartbreaking it was.

“My heart dropped into my stomach,” she explained. The way Krasinskidelivered during that vulnerable moment, even crying in some of the takes, shesaid, “It wrecked me.”