Home » TV and Movies » 'The Queen's Gambit': Inside Casting Marielle Heller as Alma

'The Queen's Gambit': Inside Casting Marielle Heller as Alma

Anya Taylor-Joy may be the star of Netflix’s wildly successful limited series, The Queen’s Gambit, playing Beth Harmon in the coming-of-age drama about a chess prodigy, but it’s director Marielle Heller, who appears as her adoptive mother, Mrs. Alma Wheatley, who steals all the scenes.

“She really threw herself into that character,” executive producer William Horberg tells ET about the filmmaker, who has earned critical acclaim for helming The Diary of a Teenage Girl, Can You Ever Forgive Me? and A Beautiful Day in the Neighborhood. Most recently, she also filmed the award-winning play, What the Constitution Means to Me, for Amazon.

But that person completely disappeared on screen. “The first time she came out of the hair/makeup/wardrobe fitting, [director Frank] Scott didn’t even recognize her!” Horberg says.

Based on the novel by Walter Tevis, the series “explores the true cost of genius” as it tells the story of an orphan, Beth Harmon (Taylor-Joy), who discovers she has a remarkable talent for chess. Soon after she’s adopted by a lonely housewife, Mrs. Alma (Heller), Beth’s passion for chess grows as she starts competing around the country. However, her passion for the game is challenged by her addiction to tranquilizers, which she turns to, to help combat her personal demons after being abandoned as a young child.

“The relationship between Beth and Alma Wheatley was always one of our favorite parts of the book. Beth is an orphan, and in a way Alma is too,” Horberg says. “For different reasons, they are both struggling to find human connections, and for a while they do, with each other.”

By the time Beth is brought into Alma’s home, she’s already a teenager, creating the foundation for more of a partnership that turns into a friendship rather than a parental relationship. While Alma initially didn’t understand Beth’s fascination with chess, she comes to support her once she realizes how much money can be made from winning tournaments — and how the game can help them both escape their lonely life in the suburbs.

“And just as we love Beth for her contradictions and transgressions, we love Alma, who is genuinely trying to learn how to be a good mother, while at the same time realizing to her surprise that she can make money and see the world by exploiting Beth’s genius for chess,” Horberg adds. 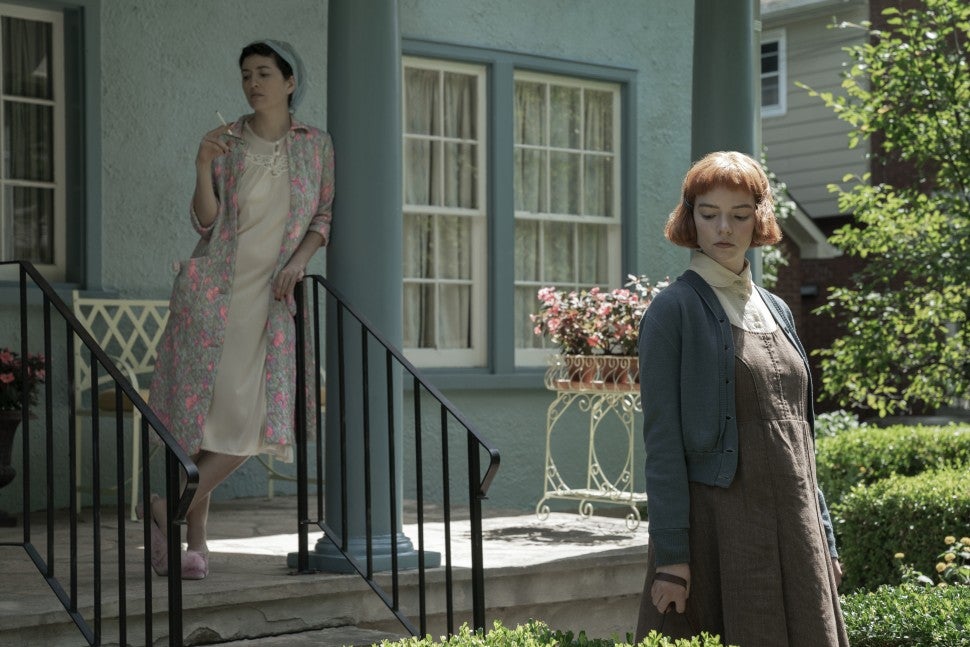 “They seem really quirky and weird, but it’s only because they’re not adhering to any stereotype that you’ve seen played out in film before,” Taylor-Joy says of the dynamic, adding that “they’re both such intricately broken people.”

The actress adds that anytime she watches the show with people, “they have such strong reactions to Alma.”

In a new, expansive featurette about the series, which Netflix claims has been watched by 62 million households in its first 28 days of release, Horberg as well as co-creators, director Scott Frank and writer Allan Scott, and Taylor-Joy reveal how they transformed Tevis’ novel for the screen.

They also explain how they cast Heller, with Frank recalling how he told Horberg he kept picturing the director in the role. Eventually Horberg said, “Why don’t we just cast her?”

“Scott knew Marielle from a Sundance connection early in her career, so he knew her multi-hyphenate talents as actor, writer and director,” the executive producer explains to ET, adding that in addition to being a “fresh, unexpected choice,” he also thinks Scott “secretly knew that it would be a gift for him as a filmmaker having her around, as a smart and trusted storyteller friend, and as a great influence on the rest of our cast, especially the younger actors.”

To their credit, Taylor-Joy says she loved having Heller on set. “Marie is like a gem of a human being,” the actress gushes. “I adored every cell of her being. I I love her.”

The Queen’s Gambit is now streaming on Netflix.