Home » TV and Movies » ‘The Sinner’: How the Season 3 Finale Says Goodbye in an Unexpected Way

‘The Sinner’: How the Season 3 Finale Says Goodbye in an Unexpected Way

[Note: The following review contains spoilers for the ending of “The Sinner” Season 3 finale.]

Bill Pullman spent his 66th birthday watching a fictional character die right in front of him. Through scheduling plans and coincidences, that day last December happened to be the final day of shooting for Season 3 of the USA series “The Sinner.” Filming the final scene between Jamie Burns (Matt Bomer) and Detective Harry Ambrose (Pullman) made for an interesting blend of urgency and focus, with a little bit of celebration on the side.

“We wanted to do it on the last day of shooting. We had a little corner to paint into,” Pullman said in an interview with IndieWire. “Tried to get a little lunchtime birthday cake in there, going into this really raw space to do the final sequence. By the time we were doing it, we were pretty efficient and got it all covered.”

It was an episode that “The Sinner” showrunner Derek Simonds co-wrote and — for the first time in the show’s three-season run — directed. Finishing up production on the season with arguably its most pivotable sequence was a deliberate choice. The showdown between Harry Ambrose (Pullman) and fatally tormented schoolteacher Jamie Burns (Matt Bomer) became the climactic physical, emotional, and psychological point of a season-long arc, leading to an understandable amount of prep. Much of it was extending the contradiction at the core of Jamie’s character, all the way up through his death from a bullet to the stomach delivered by Harry’s gun.

“We tried to make Jamie as sympathetic as possible, given his actions,” Simonds said. “We knew we wanted him to devolve into a violent place. But I tried really hard to delay that and show the struggle around violence and not have that come too easily. We’d rather have Jamie say things and express things that hopefully resonate with everyone. There’s kernels of truth in everything he says that I think people largely relate to.”

The extended showdown was a challenge for the actors to perform, but getting to that point was also a complex writing journey. Watching Harry hold Jamie’s hand as the young man bleeds out on his living room floor becomes a final act of mercy and comfort. Even though Harry’s gunshot was the fatal blow, there’s still a way that “The Sinner” avoids pitting the two men against each other as simple, easy foils. 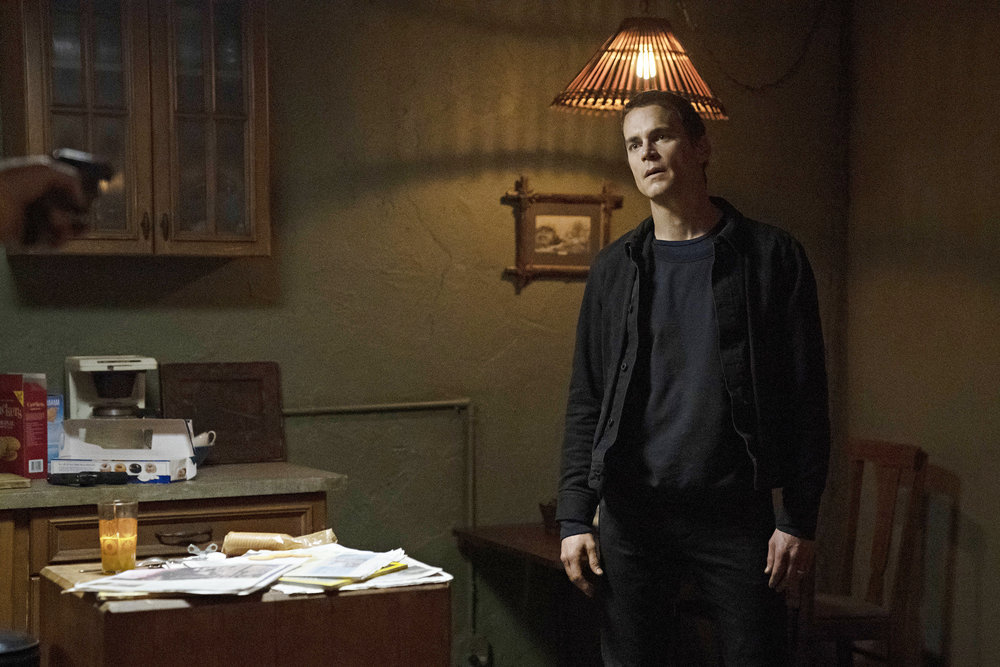 “Even at the very end of the finale, they’re still toggling between being antagonists and being soulmates. That never goes away completely. If you lose that, then it’s too reductive, and you’re giving people a good vs evil storyline,” Simonds said. “I don’t want to give people that easy way out with this story. I hope that at the end of the season, Jamie lingers as this conflict that’s not easily resolved. He stays kind of a knot rather than a solution.”

Part of the work in preparing Jamie’s final moments involved ensuring that Pullman and Bomer were on the same page about not just the physical logistics of grappling over guns and the hand-to-hand combat particulars, but the overall arc of the scene. Pullman admitted that his actorly instincts usually gravitate toward a looser approach within any given scene. Filming Jamie’s dying moments of fear and sadness, Pullman found common ground with the more meticulous Bomer in an unexpected way.

“When you go to loop it, you hear your voice, certain effort sounds or guttural sounds or things that are coming from a place that you didn’t really realize,” Pullman said. “We were really trying to find our breath in parallel with each other. That was something that I hadn’t really anticipated to be so important to get in sync there.”

That blend of the physical and the verbal also shows up in Jamie’s farewell to his wife Leela (Parisa Fitz-Henley). After a season of turmoil within and outside their marriage, that last shared bit of understanding, with the two on opposite sides of a glass door, happens with no words spoken between them.

“If you read the script, that scene with Jamie and Leela, every emotional beat and permutation in that scene is scripted,” Simonds said. “We anticipated writing a final scene between them and everything that I approached felt like it was a beat we had already written in the story. And it occurred to me suddenly that the only thing he’s doing is coming to say goodbye — to see her one last time. There’s really nothing more to say at this point. It felt so right when we realized that it didn’t need any dialogue. There’s a lot of silence in the finale, but there’s a lot of talking. So it felt really good to not have another scene where characters were processing through words.”

The season ends with another wrenching sequence: watching Harry again realize the ramifications of what passed between him and Jamie. The gunshot, the pain, the sense of control, and the internal reckoning with events in his own life all crest as he sits across from Sonya (Jessica Hecht), a woman he could feel more ready to share his life with, now that this part of it is over. Season 3 of “The Sinner” ends in tears, with no easy answer to wrap everything up, but Simonds still sees it as optimistic. 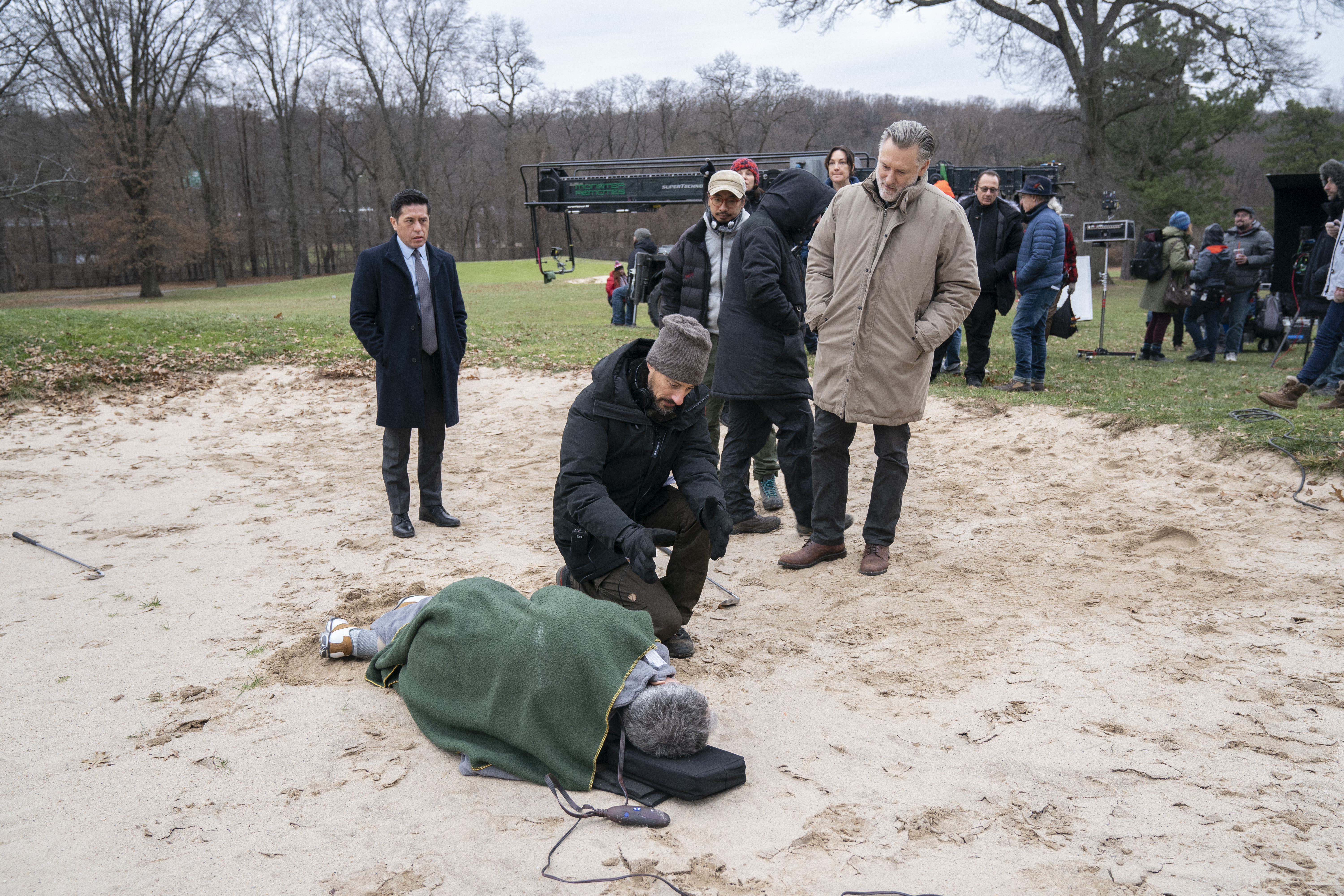 Derek Simonds (center), directing the Season 3 finale of “The Sinner”

“I see a lot of hope in that scene, this cathartic moment where Ambrose — after three seasons of containing his emotions — is finally undone. The dam is broken there. To me, I see that as a very hopeful moment, that he’s starting to learn how to be vulnerable and intimate with someone and that might just be with Sonya,” Simonds said.

“The Sinner” has always operated through an anthology structure. Each season has come without a guarantee of what may come next. The show’s ultimate future is still yet to be determined, but Pullman explained that if the show continues, it will continue the challenge of balancing Harry’s personal evolution with the things that keep him a steady force.

“I feel so fortunate to be given this thing that I had spent my life kind of avoiding, doing a recurring series. I just was so afraid of being locked into something that I would lose my passion for. But now being given it, you realize that finding the character, the traits that do stay inside his core, it’s been part of the overall sense of discovery of doing it over three seasons,” Pullman said.

These three seasons also offer an effective trilogy in charting Harry’s journey from a detective in denial about many things in his life to one who’s made a number of significant breakthroughs. If this really was Harry’s farewell, Simonds feels like he will have been left in a good place.

“My thought was always that we would follow Ambrose. Every season and every case that he encounters forces him on his meta arc over the course of the show. Each case really stimulates him and challenges him in a certain way. Jamie really is the ultimate challenge for Ambrose. I do think that there’s a beautiful completion, if this is all that we see of Ambrose. If the show doesn’t continue, I’m really pleased with the arc that we’ve told,” Simonds said. “There’s always the question of, ‘If there’s a Season 4, what would Ambrose’s next step be?’ The show is an anthology show [so] we could just completely refresh the show with entirely new characters. But we’ll see. I think the show has always been designed to bring Ambrose on this larger journey in his life.”

“The Sinner” Season 3 is now available to watch via USA.