Home » TV and Movies » 'The Stand' Doesn't Play by the Book

'The Stand' Doesn't Play by the Book

Stephen King has long had his issues with ending his books, which is the downside of writing without outlines and letting the story travel wherever makes sense in the moment. Beginnings, though? Few writers have ever been stronger at them, and few King novels begin better than his 1978 post-apocalyptic opus The Stand.

The novel opens with a soldier escaping a top-secret military facility as a plague has been unleashed that kills everyone around him. He grabs his wife and daughter, and takes off into the night, unwittingly spreading this superflu (soon known as Captain Trips) around the entire world, until only a tiny fraction of the global population has survived. The book’s early chapters are so relentless, and so good at introducing core characters like Texas everyman Stu Redman and junkie musician Larry Underwood, that the first few hundred pages fly by, even in the vastly expanded 1990 re-release. The 1994 ABC miniseries adaptation has its flaws, but it at least recognized the power of King’s opening, which in TV form played out to Blue Oyster Cult’s “Don’t Fear the Reaper,” back before that song was most associated with the phrase “more cowbell.”

Now The Stand is back on television again, this time as a nine-episode miniseries on CBS All Access. In some ways, it’s an improvement on the ABC version, thanks to several strong lead performances (particularly Alexander Skarsgård as the Devil-ish villain, Randall Flagg, and James Marsden in his most convincing aw-shucks, All-American mode as Stu) and advances in digital effects and makeup that allow for a more believable end of the world than was possible to show a quarter-century ago.

But this new Stand is troubling from the start — or, rather, from where it starts. Because for some baffling reason, this new version opts to begin in the middle.

We do eventually see the soldier’s escape, and what people like Stu, Larry (Jovan Adepo), and Frannie Goldsmith (Odessa Young) experienced in the early days of the Captain Trips outbreak. But we see them out of order, and instead open five months after the end of the world as we know it, with a community of survivors already formed in Boulder, Colorado, and with Frannie’s creepy childhood neighbor Harold Lauder (Owen Teague) helping to dispose of the many, many dead bodies the plague left behind. From there, the miniseries bounces backward and forward in time, between events in Boulder, the plague, and the arduous journeys our heroes took to find Mother Abagail (Whoopi Goldberg), the wise, old woman who represents the forces of light opposite Flagg’s evil, decadent community in Las Vegas.

Movies and TV shows have been using out-of-sequence storytelling forever, often as a way to hook the audience on a plot that otherwise takes a while to get going. You know the type: [record scratch] You’re probably wondering how I wound up juggling chainsaws at Prince Harry’s bachelor party. Well, it’s a long but eventually thrilling story… The in media res opening is rarely a convincing disguise, though the motivations behind it are understandable. But The Stand director Josh Boone and showrunner Benjamin Cavell, who wrote the premiere together, have inexplicably done the opposite, downplaying an exciting beginning to instead land in the more workmanlike middle.

You might think that the changes were made in response to Covid-19, because who wants to watch the spread of a fictional pandemic while we’re still battling a real one? But Cavell has said that this was always the approach they planned to take, because they feel The Stand is less about Captain Trips than about the survivors’ attempts to rebuild the world in its aftermath. From that perspective, jumping straight to Boulder makes some sense. But it robs this version of all narrative momentum, while undercutting attempts to establish the characters and their relationships. The good guys all end up in the Rockies, but the story lies as flat as the plains they (very briefly) cross on the way there.

King’s book was a huge influence on Lost, and Boone and Cavell’s take in turn feels more modeled on the adventures of Jack, Kate, and Sawyer than on the original text. Early episodes emphasize one or two characters (Harold and Stu in the premiere, Larry in the second hour, Amber Heard as Larry’s emotionally damaged traveling companion Nadine in the third) and attempt to use the non-chronological narrative to link various moments in their journey. Mostly, though, the bouncing around in time is counterproductive.

We jump into relationships midstream, and only sometimes get the necessary context later. When Stu’s group opts to send some spies to Vegas to see what Flagg is up to, for instance, it’s presented as a huge deal that they nominate their developmentally disabled(*) friend Tom Cullen (Brad William Henke) for the assignment. But Tom has basically appeared in one scene to that point, so the group’s faith in him, and the moral dilemma of endangering someone who can’t fully understand the risk of the job, doesn’t really land. The show also provides some glimpses of the characters on the road to Boulder, but in an intermittent and abbreviated fashion, before losing interest in that part of the story — arguably the most crucial for explaining why this group matters — altogether. We get a good sense of why Stu and college professor Glen Bateman (Greg Kinnear) become friends, but huge events in the romance between Stu and Frannie are at best implied, and the fates of other characters are resolved with clunky exposition.

(*) Several characters from the book haven’t aged well, the childlike Tom and magical old black woman Mother Abagail especially. Cavell and Henke try to reframe Tom in a more enlightened context — each time he meets someone new, he delivers a rehearsed speech, which he clearly got from a social worker or teacher, about his cognitive deficits and difficulty reading social cues — but his reduced presence in the road-trip portion of the story (where he’s befriended by the deaf Nick Andros, played by Henry Zaga) makes it hard to give him real depth. Whoopi Goldberg, meanwhile, has already basically played Abagail with her role as the serene, immortal Guinan on Star Trek: The Next Generation. Her performance here avoids most of the clichés inherent in the character, but in the process makes Abagail seem much less powerful than the story needs her to be. 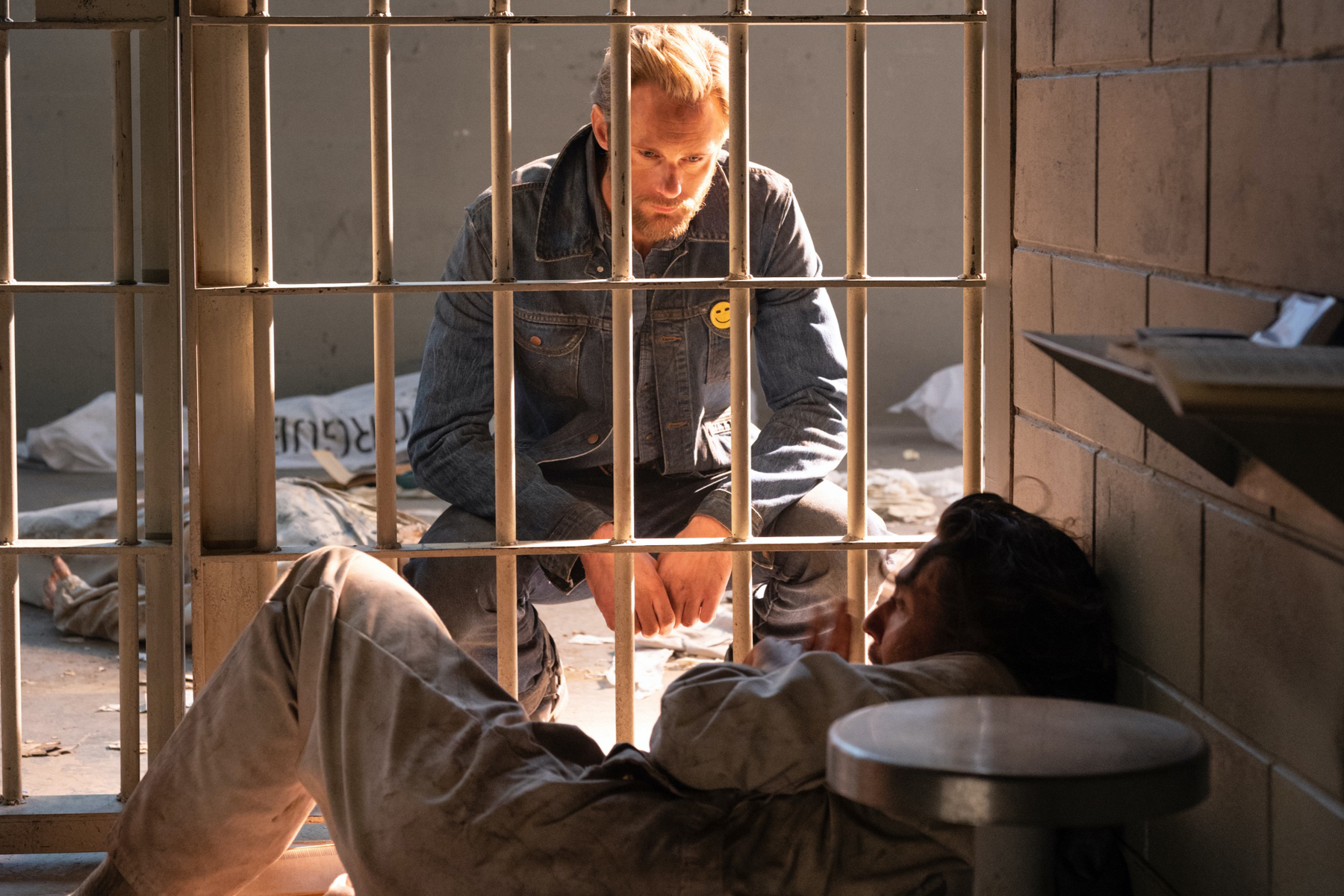 Alexander Skarsgård as Randall Flagg and Nat Wolff as Lloyd Henreid in ‘The Stand.’

Even the decision to focus so much on Boulder (and, to a lesser extent, what Flagg and his leering cult followers are up to in Vegas) doesn’t make sense in this time-fractured structure. The goal, it seems, is to show society being rebuilt from the wreckage of Captain Trips(*). But the story skips past the early days in Boulder when the rules were being rewritten from scratch, and is instead more focused on Harold’s dangerous fixation on Frannie, or prophetic dreams different characters have about Flagg. (Our glimpses of Vegas barely bother at all with how things work, but Skarsgård is charismatic and obviously dangerous in a way that makes those passages livelier than the ones about his well-meaning opponents in Colorado.)

(*) Well, either that or it can be chalked up to the same reason so many seasons of The Walking Dead (which has itself borrowed liberally from The Stand) take place in a static location: because it’s cheaper and easier to film than if your characters are constantly moving from place to place.

This new version has its inspired moments, like the way Billy Joel’s “The Stranger” somehow turns out to be the perfect theme song for Flagg, but the structure keeps sucking the life out of things, from major characters to more minor ones. The unhinged pyromaniac who calls himself Trashcan Man appears in a parallel narrative throughout the book before playing a huge role in its climax; here (played in suitably off-kilter fashion by Ezra Miller), he doesn’t turn up until the season is more than halfway done. Without the connective tissue, presented in the proper order, little of what we see feels like it matters.

So many movies and TV shows over the years have borrowed the iconography and events of King’s book that it might be hard for any modern adaptation to have the impact that the novel or even the ABC version once did. But this Stand overthinks its way to irrelevance, at least in the parts made available for critics. The finale promises something new: a coda, long planned and here written by King, about what happens in the aftermath of the book’s conclusion. If nothing else, it would be ironic if a show that so bungles one of King’s best openings winds up correcting a conclusion he’s never entirely loved.

The Stand premieres December 17th on CBS All Access, with episodes being released weekly. I’ve seen six of nine episodes.