It must be written somewhere that any and all cinematic homages to the neon-tinged ’80s have to include the use of Cyndi Lauper’s pop classic “Girls Just Want to Have Fun.” That’s doubly true for films focused on girls coming of age during the decade: Lauper’s 1983 song even inspired a 1985 comedy with the same name. And the cinematic truism still holds in Rachel Lee Goldenberg’s new “Valley Girl,” a musical reimagining of Martha Coolidge’s 1983 cult classic.

For the first-time feature filmmaker (known to many for her TV credits, including the amusing Will Ferrell- and Kristen Wiig-starring Lifetime send-up “A Deadly Adoption”), turning the film into a jukebox musical was actually a means of saluting the original. “I wanted to feel like there’s a reason and we’re not just rehashing this classic cult film, and the musical element felt like it gave permission to pay homage to it,” Goldenberg said in a recent interview. “Taking all these songs and re-producing them and re-imagining them and often re-genre-ing them to mean something else and work for our story — that was part of the fun, and the huge challenge of this.”

Both Goldenberg and her film have been waiting for this moment for a long time. The new “Valley Girl” was originally announced back in 2016, and once the cast was in place, MGM and United Artists Releasing granted it a summer release date in 2018. Before it landed, however, UAR swapped it for another contemporary retelling of a beloved ’80s comedy, opting to release “The Hustle” instead. The film languished without a release date for another year (“It’s not the most fun thing,” Goldenberg admitted), and was eventually removed from the calendar before landing a VOD date just weeks ago.

“I am thrilled that it will be seeing the light of day,” Goldenberg said, though she demurred to share more about the internal machinations at MGM and UAR that might have kept it on hold for so long. “There’s so many decisions that go into when they’re going to release a movie, and there’s been stuff going on on their end. I’ve just been thinking how happy I am with the movie and how much I loved the process and sort of sitting around twiddling my thumbs, being excited for this moment.“

Like the original, the film is a modern spin on the classic Romeo and Juliet mythos, imagining Julie (played in Goldenberg’s film by Jessica Rothe, picking up from original star Deborah Foreman) as a popular Valley girl who unexpectedly falls for Randy, a punk from the other side of the Hollywood Hills (played by Zack Whitehouse, taking over from Nicolas Cage in one of his earliest parts). While Julie and Randy are falling in love, everyone else around them doesn’t quite get the attraction, leading to plenty of tension and lots of tears. 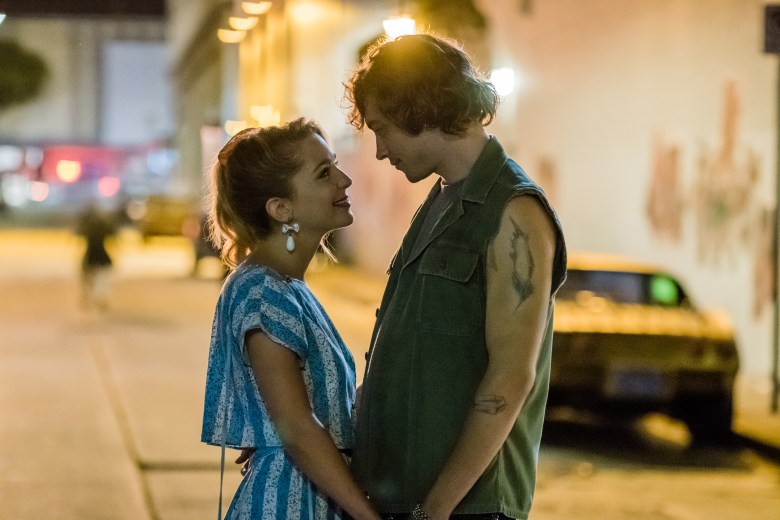 Armed with that musical bent, Goldenberg’s film (written by Amy Talkington) goes beyond the original in drawing inspiration, with additional aspects of “Moulin Rouge,” “Grease,” and “Fast Times at Ridgemont High” visible throughout. The film is filled with slightly anachronistic songs, from Madonna to Roxy Music, The Go-Gos to Queen and David Bowie. Each song was totally remade for the film, with the stars singing their own parts and whole arrangements redone to fit the individual scenes.

There’s a fantasy element to some of these choices, as several songs came out later than the setting of the movie. “I wanted to tell the story and do the story justice more than to be a historian,” Goldenberg said, noting that none of the music in the film was released any later than 1987. “Yes, it is technically 1983 and it is sort of centered around there, but to me, the storytelling is the most important part. Having a little bit of flexibility, especially when you’re in a musical, feels like you’re sort of allowed that room to play.”

Most of the songs were written into Talkington’s original script, but Goldenberg estimates that the pair swapped out about of half of them. “There were some that I loved, but I didn’t want there to be a gimmicky element to the music,” she said. “I really wanted, as much as possible, for it to be as though the lyrics could be dialogue that the characters were saying. We’re not just throwing in a song like, ‘Hey, remember this fun ’80s song? Isn’t that cute? OK, back to the movie!’ But really having the songs feel of the characters and of the emotion.”

That means that while “Girls Just Want to Have Fun” does appear in the film, it’s been given a clever freshening-up to suit the narrative. During a trip to the beach, Julie’s desire to do something more meaningful with her life emerges, and when the song cues up, it’s all her best Valley pals trilling along about living life for the fun of it. Julie, however, is looking for something more, and when Rothe sings, “I want to be the one to walk in the sun,” it suddenly takes on new meaning (both for her and the song).

Julie’s eagerness to spread her wings beyond the Valley finds direction in her relationship with Randy, who introduces her to all sorts of crazy new stuff. On their first sort-of date, he hauls her off to a Hollywood club for a punk show, opening her eyes to life beyond the confines of the Valley. The film is still a fun, sexy romance, but now, it also feels like a coming-of-age tale that happens to be set to some of the era’s most iconic songs.

Goldenberg, who grew up in small-town Massachusetts and got into the hardcore scene as a teen, recognized that part of Julie’s journey immediately. “My own experience of going to those hardcore shows was [about] opening up my world,” she said. “And sure, I fell in love a couple of times through those with people that my parents probably didn’t approve of, but the larger picture of what it did for my life was actually the bigger thing. That’s the realization that she has, that her life can be bigger.“

Goldenberg said she is curious about how fans of the original will react. Funnily enough, Coolidge’s film only recently became available on VOD (Goldenberg had to buy old copies of the film on eBay to show her crew), and seems to be enjoying a resurgence of its own. Goldenberg hopes her film can be part of that. “It certainly seems like a good time for it, it feels like there is an attentive audience and people who are needing some good news and some fun, and so it feels like a good match,” she said.

And while Goldenberg understands that fans of the original might balk at the new version, those that loved the totally tubular original are in for a treat: Tucked inside the film are cameos from Deborah Foreman — yes, the original Julie — as well as Elizabeth Daily and Heidi Holicker, who played her best pals Loryn and Stacey.

Goldenberg and her crew met the original stars, along with Coolidge, during a screening of the film at the New Beverly in Los Angeles just before they started production on the new one, and the original Valley girls were happy to appear in Goldenberg’s vision. You might even say they had fun with it.

“Valley Girl,” an MGM release, arrives on VOD on Friday, May 8.