Home » TV and Movies » Watching Deavan and Jihoon's wedding on 90 Day Fiance: The Other Way is super awkward knowing she's with another man now

Watching Deavan and Jihoon's wedding on 90 Day Fiance: The Other Way is super awkward knowing she's with another man now

Everything seems to be looking up for Deavan Clegg and Jihoon Lee on 90 Day Fiance: The Other Way, but real 90 Day Fiance fans know this isn’t how the story ends.

Although they declared their love in front of their families, the messy breakup between the two unfolded a few short months later.

The wedding wasn’t what she wanted

The wedding was not how Deavan imagined her wedding. Participating in a “factory style wedding,” she had a total of 45 minutes to enjoy her special ceremony before getting kicked out by another bride.

Fans cringed as the couple vowed to “love each other no matter what.”

Deavan admitted in her confessional, “Before Jihoon, I’ve never felt what it’s like to be in love with someone, and I can truly say right now that I feel like I really love Jihoon.”

Even Deavan’s mom Elicia’s tune changed as she admitted she was starting to approve of Jihoon after the wedding day in Korea.

She’s has a new man in her life

After a beautiful day of celebration, being stuck in quarantine together took a major toll on the newlywed’s relationship. They argued constantly, and the only solution she saw was space from each other.

Deavan decided to go home to America for “one month” with her two young children.

Deavan told Jihoon she would miss him. He responded, “You sure? I don’t think so; you just run away from me.”

“I’m not running away; I’m doing this to fix our marriage,” she replied.

Fans were confused when Deavan promised Jihoon her return.

She told Jihoon she would be coming back to Korea, but months later, Topher Park made his debut in her life. 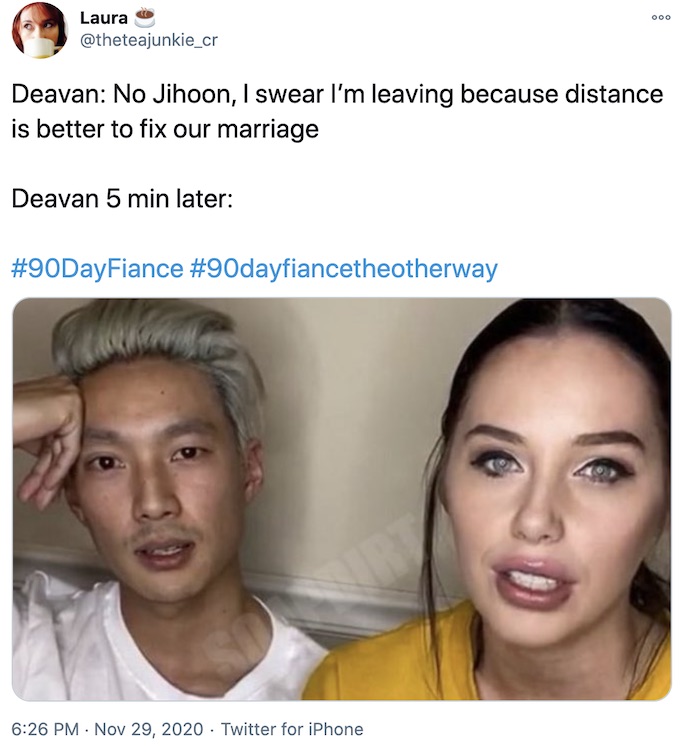 Her breakup with Jihoon was confirmed in August, and it was a few weeks later when Topher made his first appearance on her Instagram.

Admitting they met on a flight to Korea, the young mom has been criticized for moving on so quickly.

Since the messy breakup, there have been abuse allegations and different versions of events. You also won’t catch this couple clearing things up as they won’t be making an appearance at the season Tell All either.

Who’s side are you on — Deavan or Jihoon’s?