After first playing ADA Isaiah Holmes in season 21, Wentworth Miller is making his return to Law & Order: Special Victims Unit on Thursday. This marks the 48-year-old out actor’s first major on-screen role since announcing in November that he was done playing straight characters.

“I just don’t want to play straight characters. Their stories have been told (and told),” Miller wrote on Instagram in addition to clarifying that he was no longer interested in playing Michael Scofield on Prison Break, his breakout series which briefly returned for a five-episode season four years ago and was reportedly going to be revived again.

Holmes, who is the first LGBTQ district attorney on SVU, follows Miller’s role as Captain Cold on The CW’s sprawling Arrowverse. They are two of the openly gay characters Miller has played on TV since his final appearance as Scofield in 2017.

On the newest season 22 episode, “The Long Arm of the Witness,” Holmes has been recently promoted to lead the Brooklyn DA’s Civil Rights Unit when he’s pulled back into the special victims unit fold after one of his old schoolmates comes under investigation and ADA Dominick Carisi Jr. (Peter Scanavino) seeks Holmes’ help. 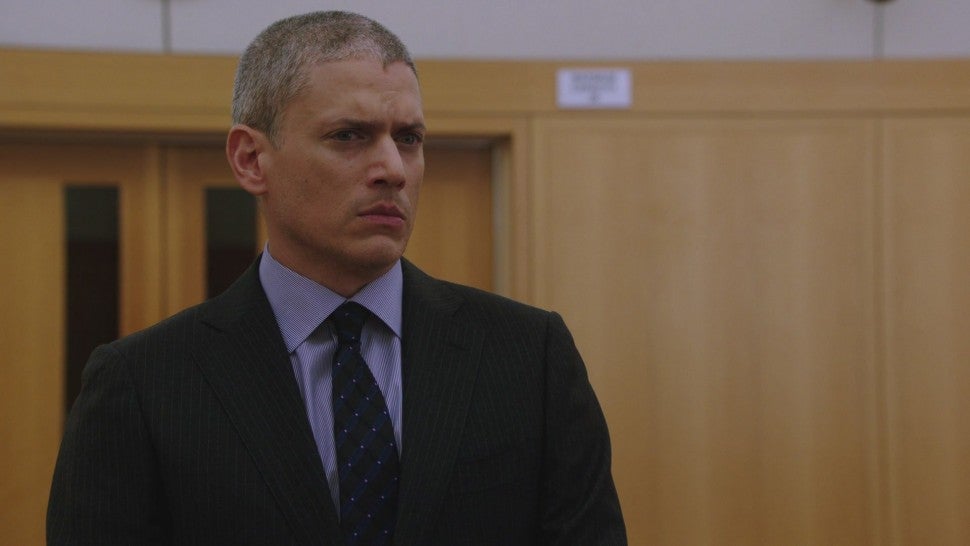 Ahead of Miller’s anticipated appearance, showrunner Warren Leight explained to ET that his introduction as Holmes last season (in “Murdered at a Bad Address”) was all too brief and that this new episode allowed them both to further explore the character’s journey and bring that to the screen.

“He’s a character with multiple layers — a man of integrity and intelligence, burdened with guilt, shame, and in his mind, a lot to atone for. Early in his life, his ‘otherness’ left him unsure and passive, now his identity as a queer POC empowers him,” Leight said, adding, “As Wentworth told me, Isaiah Holmes now ‘knows who he is/what he stands for, and is fearless in advocating for those who cannot advocate for themselves.’”

In an interview with ET, Miller opened up about returning to the Law & Order universe, reprising his role as Holmes, and playing more authentic characters in the future.

ET: What made you want to return to Law & Order: SVU?

Wentworth Miller: It was always in the back of my mind. I’ve always wanted to be part of the Dick Wolf universe. I used to imagine courtroom scenes with me and Sam Waterston. I still do.

What was it like stepping back into the role of ADA Isaiah Holmes and reuniting with the cast?

Peter’s lovely to work with. The whole cast is. Which helps. The guest star thing can be a little stressful. Like the first day of school. Except everyone’s a senior and you’re the first year, trying to keep up.

From what I could tell they were taking every precaution. We got tested on the way into work, had masks on between takes… Was I excited to get swabbed at 6 a.m.? No. But you do what’s necessary. You’re grateful to be working.

Warren said that you two spent a lot of time discussing the character’s journey and his identity as a queer person of color. Was there anything specific that you brought to his story and where he is now?

The first time I met Warren, we agreed any character I’d play would be gay and a POC. That took all of 30 seconds. Then it was like, “And?” What else? Who is this person? What’s he bringing to the table? Savvy? Integrity? Resourcefulness? That’s what we’re exploring now. And I think we see hints in this next episode… Warren’s been very open to that conversation.

This is your first major role since you went on Instagram to say that you’re no longer going to play straight characters. How did it feel playing this character this time around?

It felt like I was where I should be. Actually I thought about BD Wong [the out actor who played George Huang for 15 seasons]. His legacy, his presence on that show… I was a fan. You sat up a little straighter when Dr. Huang entered the chat.

How does it feel taking on more authentic roles and playing characters that are truer to yourself?

I have things in common with Isaiah but we’re not the same person. Obviously. I had things in common with Michael Scofield too. What feels more truthful maybe, more authentic about Isaiah is I don’t have to spend time servicing straightness. Straight relationships. Acting is investigating. For me. Mapping new territory. Articulating things I don’t get to articulate in my day-to-day. Mapping straightness, at this point… feels like a dead end.

Are there any specific stories you’re interested in telling or playing now that you’re done playing straight characters?

Sure. I’d like to tell — to watch — more stories where gay characters are informed by their struggles, but not defined. Not getting sacrificed so straight characters can enjoy some kind of epiphany. I don’t think that’s too much to ask. It’s so important queer audiences — queer kids — see stories that don’t center suffering. See us empowered, in positions of authority. Moving through the world with purpose. Confidence. Dignity. It makes it easier to imagine those things are available to us in real life too.

Warren said he “hopes Holmes will return and continue to evolve.” Are you interested in returning to SVU or the larger Law & Order universe in the future?

Right now I’m taking it one day at a time. I think we all are. But I’m open. I told Warren I’m looking forward to whatever there is to look forward to.