Home » TV and Movies » When Henry Selick and Jordan Peele Team Up, Things Get Wild

When Henry Selick and Jordan Peele Team Up, Things Get Wild

The stop-motion animator and the horror writer-director collaborated on the screenplay for Selick’s latest darkly comic fable “Wendell & Wild.” 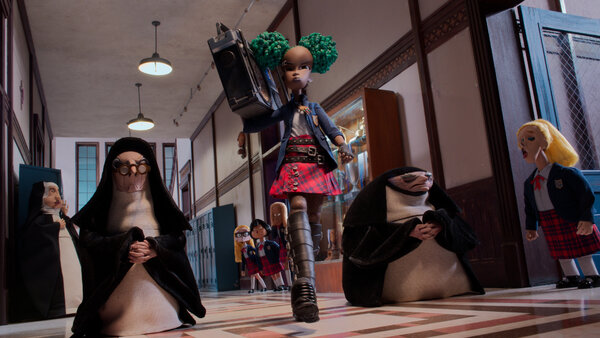 Nearly two decades ago, the uncanny forces inside Henry Selick’s own home inspired him to summon the original concept for “Wendell & Wild,” his first stop-motion animated feature in 13 years, which is streaming on Netflix.

“My two grown sons were once little kids who acted like demons sometimes, so I did a loose drawing of them as demons,” Selick, 69, said by phone. Based on that personal doodle, he wrote a seven-page story about the mishaps of two diabolical brothers, Wendell and Wild, trying to escape hell and come to the land of the living to become rich.

To materialize this idea many years later, Selick, an accomplished animation veteran whose credits include “James and the Giant Peach” (1996) and “Coraline” (2009), joined talents with the comedian-turned-director Jordan Peele, long before “Get Out” positioned Peele as a hit-making genre storyteller. Their shared ability for weaving horror and comedy cohesively in their work made for great synergy in their artistic partnership.

“The best thing about Jordan, besides that he’s a genius — as a comic, a writer and now as a horror director — is that he loves stop motion animation and he knows all about it,” said Selick. “Even the logo for his company, Monkeypaw Productions, is stop-motion animation.”

In 2015, Selick approached Peele and Keegan-Michael Key about collaborating. A fan of their Comedy Central sketch show “Key & Peele,” the filmmaker thought the duo would make the perfect Wendell and Wild. They were both interested, but Peele wished to become further involved by helping to shape the narrative. He shares screenplay credit on the film with Selick.

“When Henry reached out, he didn’t know I was already a huge fan of his, ever since ‘The Nightmare Before Christmas,’” said Peele during a recent call. “He is a modern-day Roald Dahl in how he can weave the humor and the horror into a whimsical and perfectly inappropriate package.”

Originally, Sister Helley (voiced in the film by Angela Bassett), a nun battling supernatural entities at an all-girls boarding school, served as the protagonist of Selick’s story. But because of Peele’s desire for this creation to look and feel unlike any stop-motion vision he’d ever seen before, the spotlight shifted to Kat, one of the young pupils at this institution who lost her parents in an accident.

Selick worried that after directing “Coraline,” making another humorously frightful fable centered on a young heroine would seem as if he were repeating himself. Ultimately, Peele’s argument to not only make Kat the lead but also to make her Black convinced the animator. Kat became the angsty Hell Maiden who ushers Wendell & Wild into our realm.