“My point of view is really to just share my stories,” the Beverly Hills franchise’s first Asian cast member says

Crystal Kung Minkoff has yet to make her debut on “The Real Housewives of Beverly Hills” as the series’ first star of Asian American descent, but she’s already talked candidly about race: first in a special “Amplify Our Voice” chat with fellow AAPI “bravolebrities” Tiffany Moon (“Real Housewives of Dallas”) and Melissa King (“Top Chef”), and through numerous social media postings denouncing incidents of anti-Asian violence and steps everyone can take to stop AAPI hate.

And while the trailer for Season 11 of the long-running series shows her getting in a heated talk with her castmate Sutton Stracke about race, Kung Minkoff believes conversation, not confrontation, is an effective way to discuss what she says can be a tough topic.

“Racism is a systemic problem. It’s a collective problem and it should be resolved in a collective way,” Kung Minkoff said in a recent chat with TheWrap’s Lawrence Yee. “To move the needle, it has to be done sort of gently; I think people get scared to talk about things and so they get defensive. My point of view is really to just share my stories, and my parties and my culture, and food. And, you know, if the conversation comes up, I never shy away from it.”

“I want people to know that they can talk to me in an open way without judgment,” she added. “I want to know about your history, too. You know, it’s not just about minority history; everyone has a story. So, I think that’s the only way to really get there with some people. But yeah, it can be very tough topic, for sure. But I don’t feel the responsibility of [educating people about other cultures]. I just I do it because I want to share.”

Viewers will get to learn Kung Minkoff’s story as the season progresses. She’s a native Angeleno who married filmmaker Rob Minkoff, the director of the Oscar-winning “The Lion King.” They have two mixed-raced children, Max and Zoe, and celebrate both Asian and Jewish traditions.

“Having kids who are mixed, with two very long lineages/history is really meaningful to our family,” she explained. “And, you know, Rob is a minority, so you’re talking about two minorities on the show. It’s an honor, it’s a privilege to be the one to represent both of these cultures, because even though I’m 100%, Chinese, when you have kids are half-Jewish, you feel the responsibility to represent that side as well.”

Kung Minkoff said she believes a great way to introduce culture to others is through parties and food. She and her husband threw a COVID-safe Chinese New Year party for her castmates during filming, which she called a great moment of sharing.

“I was so surprised. I think all almost all of them had never been to a New Year party, like a Lunar New Year party,” she recalled of the most important celebration on the Lunar calendar. “[I thought] wow, that makes no sense to me. But then it does, you know, and for me to be able to do that for them for their first time was really special.” 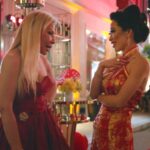 One thing her castmates were able to share with her were fashion tips. A self-described “natural person” who wears pajamas around the house, Kung Minkoff stressed out about matching the extravagant looks the cast – especially Erika Girardi and Dorit Kemsley – are known for.

“I think it was my most nerve-wracking part of the experience,” she admitted. “I think I lost sleep the first couple weeks, like, ‘What am I gonna wear tomorrow? What is everybody going to show up in?’ I just admire the girls; they are so fabulous. You just feel like you’re constantly at like a fashion show.”

Check out the full interview above to hear more about Kung Minkoff’s experience at the first Asian “Real Housewives of Beverly Hills star” and her favorite look she wore all season.

Season 11 of “The Real Housewives of Beverly Hills” debuts on Wednesday, May 19 on Bravo.