Susanna Reid was told off by Dominic Raab MP for constantly “interrupting” him when he was trying to answer her question. The politician was invited onto Good Morning Britain to discuss the Metropolitan police force’s behaviour over the weekend – in particular the arrests made on Saturday at Clapham Common, South London, where Sarah Everard’s vigil was being held, as well as the probationary police officer who was helping investigate the missing 33-year-old woman coming under fire for allegedly sharing an “inappropriate graphic” via social media last week.

Reid began: “Even within your own party, there are those who say ‘it’s you who takes the responsibility for this as the government’ because the legislation has criminalised protests.

“The police are getting all the flack for this and as we’ve heard in individual cases, sharing memes around the Sarah Everard investigation and an individual officer dismissing a woman’s complaint about a sexual offence – absolutely.

“And as we’ve seen from the scenes on Saturday night, there are important questions to answer. But this is down to legislation isn’t it? Passed by politicians and police, I’m sure are saying ‘what on earth are we supposed to do?’”

Raab replied: “I am sympathetic to that argument, we have passed legislation, the reason we’ve passed it is to prevent more deaths from this appalling vicious virus that we face. 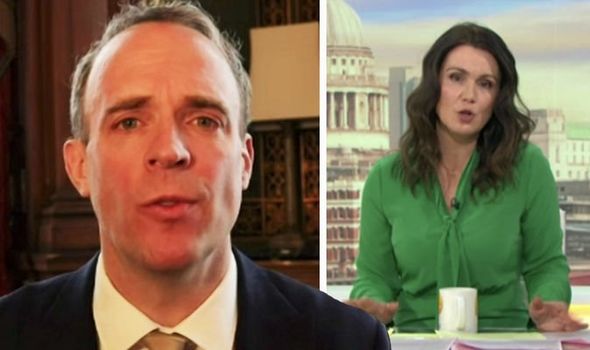 “It’s temporary, they will be gone as soon as possible. We’ve got a proud tradition of free protests, peaceful protests and I think the police are in a very difficult position.”

As the politician was finishing, Reid was heard commenting at the same time: “A proud tradition of free protest that currently is being stifled by the coronavirus legislation.

Raab was heard saying: “First of all, I think it’s right we passed the legislation because we’ve got to protect the public from this awful pandemic. 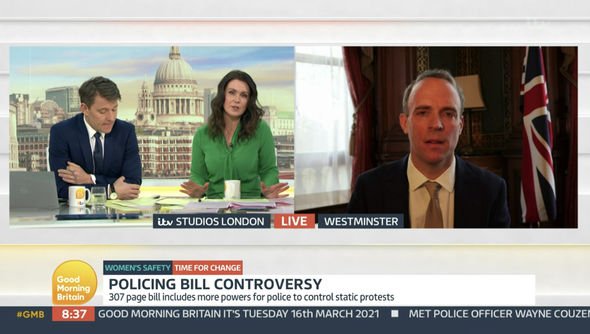 “In terms of the balance and operational decisions on how it applies and the specific ways, obviously police operational independence is very important to respect. But I think it’s right that the Met -”

“Hang on, the police are just upholding the law?” Reid interjected and Raab commented in response: “Susanna, you keep interrupting, again.”

“Should have they upheld the law on Saturday night and dispersed the protesters or the people who were there of the vigil, it seemed to have turned into a protest,” the presenter continued.

“Or should they have just stepped back and not upheld the law? That’s the point that the police want the answer to.” 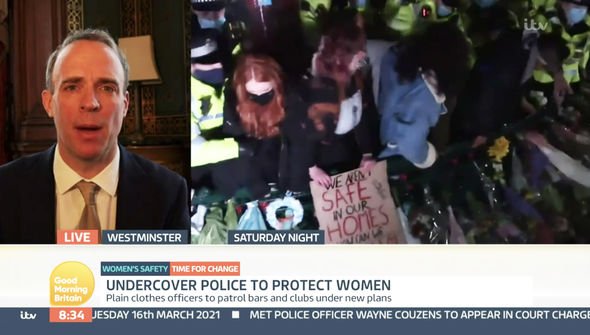 “I’m sorry Susanna, you were interrupting me,” the politician remarked. “The point I was making is we passed the law but the operational implementation of it is for the police and quite rightly when there’s a question about the way it’s been handled, the Met itself has instigated a review.”

Later on, Reid said: “I know you don’t want me to interrupt you, but I think there will be a lot of people who say it’s not good enough to say ‘we make the law but you decide how it’s interpreted, you decide how you police it’.

“I think people, particularly the police want to know, did you want them to do what they did on Saturday night? And under the law, arrest people who didn’t leave that gathering?”

“Sorry, I think you’re quite wrong about your basic point here,” Raab replied. “The public and the police do not want politicians interfering in individual questions about how the law is enforced. Of course, we reflect on the lessons learnt.”

Those watching at home took to social media to give their thoughts on Reid vs Raab.

One said: “Could have done with @piersmorgan this morning Dominic Raab getting away not answering the questions from Ben and susanna #GMB.”

“Susanna you’re interrupting me” that’s because it’s an interview Dominic, not a party political broadcast #gmb,” another mentioned.

A third added: “Glad to see some of @piersmorgan tactics have been passed onto @susannareid100 – They are very much needed when interviewing Govt ministers to say the least. #GMB.”

Good Morning Britain airs weekdays at 10am on ITV.