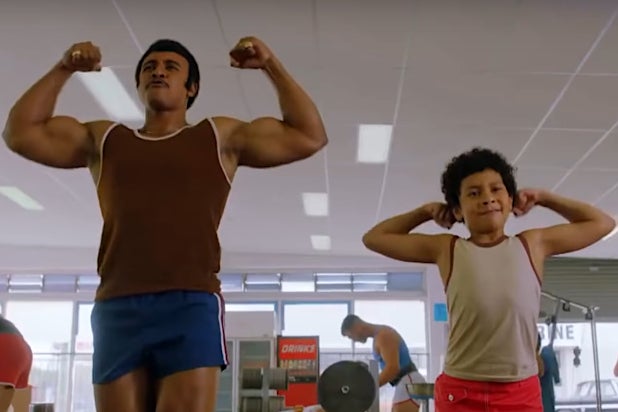 As the new teaser for Dwayne Johnson’s upcoming NBC comedy series “Young Rock” says, “Every hero has an origin story — but not a full mustache at age 15.”

The series — which is The Rock’s true-life story — will follow young Dwayne’s childhood, where he was inspired to become an athlete by his pro wrestler father Rocky Johnson. “When you dream big, the sky’s the limit,” Rocky tells his young son in the clip. And while Dwayne would eventually become a wrestling legend as the cocky, trash-talking WWE champion known as The Rock, he had his fair share of awkward moments, like when he told a girl in high school that his name was Tomas because he thought “it sounds way cooler than Dwayne.”

In his tweet showing off the teaser, Johnson dedicated the show to his late father, who died a year ago. Rocky Johnson (played by Joseph Lee Anderson in the series) became a WWF Tag Team Champion in the 1980s while marrying Ata Maivia, the daughter of Samoan wrestler Peter Maivia. Despite worries about his son becoming a wrestler, Johnson agreed to Dwayne’s request to train him, leading him to become one of the biggest stars in the history of wrestling.

“I wish my dad was around to see. Maaaaan he would’ve been proud,” Johnson tweeted. “Cant wait to make ya laugh and share some life lessons I’ve learned along the way.”

“Young Rock” stars Adrian Groulx as the 10-year-old Dwayne (Dewey, back then), Bradley Constant will play high school Dwayne and Uli Latukefu will play college Dwayne, with Stacey Leilua as his mother Ata and Ana Tuisila as his grandmother Lia Maivia. The actor and former WWF and WWE superstar is also set to appear in all 11 episodes.

“Young Rock” premieres on NBC on Feb. 16. Watch the teaser in the clip above.