An £18billion plan to harness solar and wind power in the Sahara and use it to supply electricity to Britain could dramatically slash household bills, it was claimed last night.

Whitehall officials are poring over an extraordinary plan to install almost 12 million solar panels and 530 wind turbines across a vast expanse of desert in Morocco and then transfer the power they generate to the UK via the world’s longest undersea electricity cable.

The Xlinks project, which is chaired by former Tesco boss Sir Dave Lewis, claims it could power more than seven million homes by 2030, supplying an astonishing eight per cent of Britain’s energy needs.

A study by energy company Octopus, which has invested in the scheme, shows that the project would result in a sizable cut in household bills. It is believed the project would deliver electricity at about half the rate of that produced by nuclear power plants.

Xlinks has been granted permission to build a huge solar panel and adjacent wind farm across a 370- square-mile expanse of terrain in Morocco’s Guelmim-Oued Noun region. 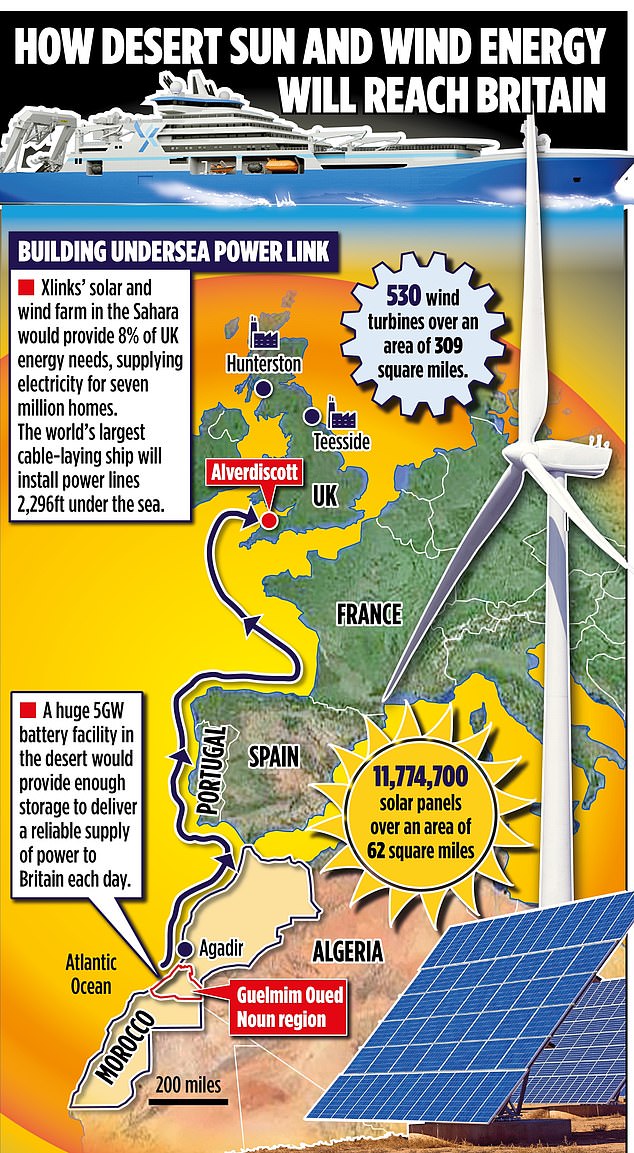 The site experiences 3,500 hours of sunshine a year, compared to 1,500 annual hours in Britain.

Trade winds pick up in the afternoon and evening, allowing a near-constant supply of energy production.

Four undersea cables would transfer the power, stored at a huge battery plant, 2,360 miles from Morocco past Portugal, Spain and France before coming ashore in the North Devon village of Alverdiscott where it will be fed into Britain’s power network.

Three shipyards are bidding to build a 659ft ship – the biggest of its type – to lay the cable.

Meanwhile, planning permission has been granted for a huge factory in Hunterston, Scotland, which will build the cable. The new plant would employ 900 workers. A second factory to build the cable could be built in Teesside. 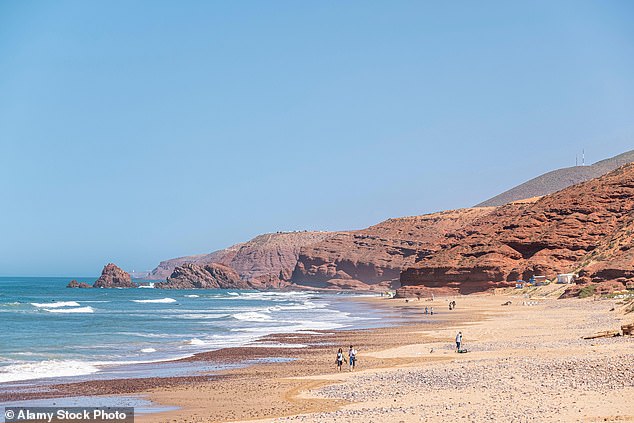 The site in Morocco experiences 3,500 hours of sunshine a year, compared to 1,500 annual hours in Britain. Pictured: Legzira beach in Morocco)

Xlinks would not require taxpayers’ money to build the solar and wind farm but is asking the Government for a deal in which public subsidies would be used to guarantee a so-called ‘strike price’ – a fixed rate – for the electricity of £48 per megawatt hour. In contrast, the strike price for the power supplied by the Hinkley Point C nuclear power plant is £92.50. A megawatt hour is roughly equivalent to the amount of electricity used by 330 homes during a 60-minute period.

Ministers are understood to be interested in the scheme because of its ability to supply energy for 20 hours a day – including, crucially, when the wind is not blowing in the UK. They will now ask the scheme’s backers to show that large amounts of power will not be lost during its transfer to the UK. Xlinks chief executive Simon Morrish said: ‘It’s an absolutely perfect location to put solar panels.

‘And the wind resource is as good as our offshore wind turbines but much more consistent because it has got daily convection currents which pick up every afternoon, blow into the evening and night and drop off again in the morning.’

One Government source said: ‘If you can guarantee renewable energy for 20 hours a day, then it becomes almost like nuclear. You switch it on and you get electricity.’