A mother grieved, a Queen farewelled, and a King’s destiny fulfilled

For decades, King Charles awaited his ascension with restlessness and dread. It’s a strange role, to spend life preparing for a destiny that depends upon his mother’s death.

As the final bells tolled for a long life, the King’s face was inscrutable as he marched behind the Queen’s coffin, which carried flowers from his own gardens and a handwritten note saying, “in loving and devoted memory, Charles R.” R stands for rex, Latin for king.

The coffin also carried the crown placed on his mother’s head when she was just 26, and he was a little boy. 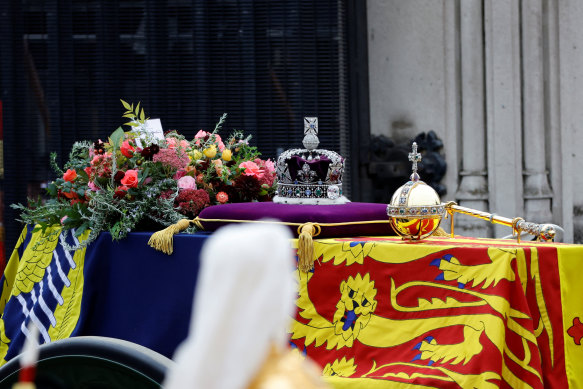 The crown, flowers and handwritten note from King Charles on the Queen’s coffinCredit:Getty

As a four-year-old, Charles found his mother sitting at her desk with that crown – studded with 2868 diamonds and a ruby the size of a hen’s egg – perched on her head. It was so heavy, she told him, that she wanted to get used to wearing it.

He has spent seven decades preparing to carry that weight, schooled by his mother. In the 11 days since her death, they have, in a sense, reigned together; she has been omnipresent, her crown by her side.

On Monday, those last ties were cut; the crown was officially separated from her coffin, and the lord chamberlain broke his wand of office. Upon her interment in St George’s Chapel at Windsor, a line was drawn under her 70-year reign, and the age of King Charles truly began.

The crown he wears will be heavier than ever; the Commonwealth is restless, there is a burgeoning reckoning with the monarchy’s role in imperial history, and Britain, emerging from a difficult, divisive few years, will miss its stalwart, stabilising Queen. 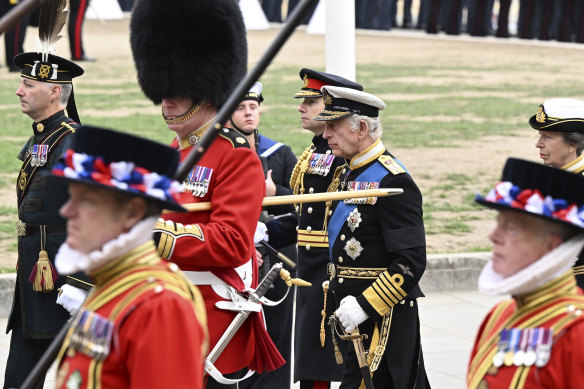 Charles kept his emotions private during the service. There was little hint of the personal grief for his mother, with whom he had a complicated relationship. They were very different. The Queen was undemonstrative and busy; the King is sensitive and craved her approval.

“Mummy [was] a remote and glamorous figure who came to kiss you goodnight, smelling of lavender and dressed for dinner,” he once recalled. The royal pressures that led to his marriage to Diana Spencer despite his longstanding love for Camilla Parker Bowles caused them all great heartache.

In recent years, their relationship settled. “He is his own man, passionate and creative,” the Queen said of Charles in 2018 for his 70th birthday.

But by the end of the service, as the congregation sang God Save the King, he looked tired and sad. Camilla, now Queen Consort, stood by his side. As she has been throughout most of his adult life, she will be called upon to be the King’s strength and stay, as the Queen described her husband Philip.

At 73, Charles is no longer a young man, although he is a fit one. His reign will be shorter; it will not be as long before the baton changes again. His son William, his heir and Prince of Wales, stood nearby with his grandson, George, who is older than Charles had been when his mother was crowned.

Juliet Rieden, the royal correspondent for the Australian Women’s Weekly, is one of the only Australian journalists to have interviewed the King. “He is a very thoughtful man,” she said. “His faith is very important. The hymns matter to him, the readings will resonate.

“I imagine that he’s very sad. I imagine he’s quite tense because it’s a huge occasion and he’s at the head of it as the King. He’s the head of the firm now, and it’s a very important start to his reign.”

Receive a wrap of our coverage as the world mourns Queen Elizabeth II in our Morning Edition newsletter. Sign up here.