Home » World News » Aberdeen in lockdown: Sturgeon orders all pubs in the city to close

Aberdeen in lockdown: Sturgeon orders all pubs in the city to close

Aberdeen is put into lockdown: Nicola Sturgeon orders all pubs in the city to close and bans travel in and out as cases linked to bar outbreak DOUBLE- just a day after Queen landed there

Aberdeen has been put back into lockdown as pubs were shut and people were banned from travelling in and out.

Scotland’s First Minister Nicola Sturgeon said the restrictions were brought back after 54 new coronavirus cases emerged after bars were packed over the weekend.

She said 191 contacts have been traced in relation to the cluster, adding the rise in cases has contributed to a greater fear their was a ‘significant outbreak’.

It comes a day after the Queen landed at Aberdeen airport where she was met by a driver and whisked off to Balmoral, roughly an hour away.

According to the First Minister, more than 20 other pubs and restaurants are involved in the cluster.

A five-mile travel rule has been put in place and residents are being told not to enter each other’s houses.

All indoor and outdoor hospitality has also been told to finish by 5pm on Wednesday. 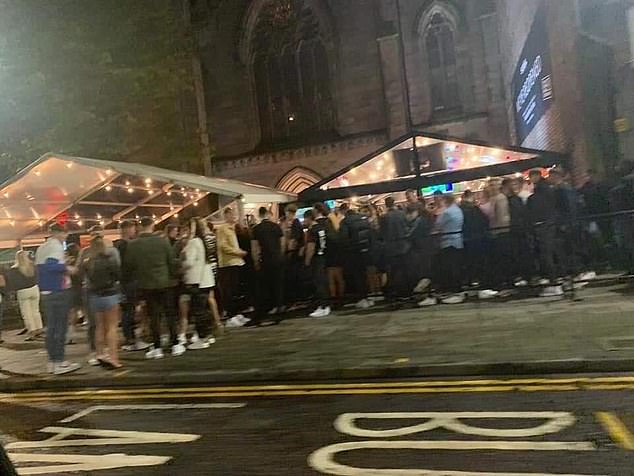 Stephen Flynn MP tweeted two photos of revellers packing in Aberdeen city centre despite the coronavirus lockdown, which Nicola Sturgeon said made her want ‘to cry’

Mr Flynn’s images show people outside Soul Bar and The Justice Mill in Aberdeen, where a cluster of cases have been linked to another pub, Hawthorn Bar 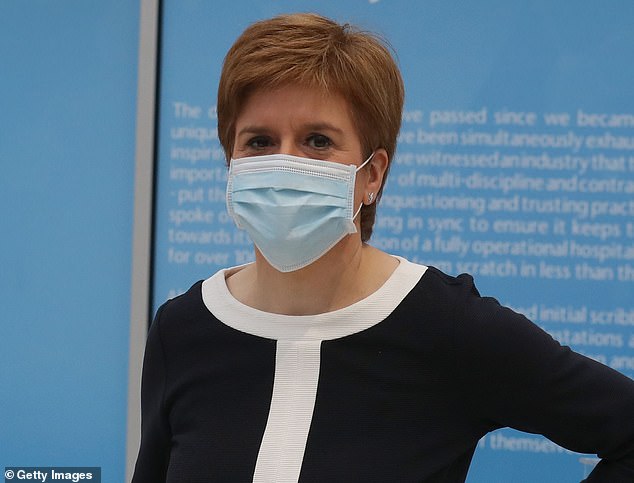 Nicola Sturgeon, pictured above on July 27, said she ‘wanted to cry’ over pictures of pubgoers gathering with no social distancing at the weekend

The closure will be backed by governmental regulations, the First Minister said, and will be enforced if the rules are not followed.

Ms Sturgeon added the changes will be reviewed next Wednesday, when she hoped they could be removed if they could, either in entirety or in part.

But if necessary Ms Sturgeon said they could be extended beyond that seven-day period.

Yesterday the First Minister she said she ‘wanted to cry’ over pictures of pubgoers not social distancing at the weekend as 27 cases of were linked to one bar.

SNP MP Stephen Flynn yesterday tweeted two photos he had spotted online of the city centre, where an outbreak took place in The Hawthorn Bar.

The MP said he was ‘scunnered’ by the images, which showed dozens of people queuing to enter pubs in the city.

NHS Grampian later announced 27 cases of the virus had been linked to the bar, adding it is ‘aware’ of photos being shared online of ‘extremely busy bars’.

Addressing the Aberdeen cluster, the First Minister said on Monday there would likely be more than the 13 cases announced on Sunday.

She also thanked the owners of the Hawthorn bar, where the outbreak is believed to have started, and said work was being done to address the cluster.

The First Minister added the coronavirus outbreak was ‘exactly what we feared’ when the decision was taken to reopen the hospitality industry.

Retweeting Mr Flynn’s images on Monday morning, Ms Sturgeon described the scenes as ‘dangerous’, warning it could result in the closure of more bars.

She said: ‘Spot on from @StephenFlynnSNP – Covid remains a real and present threat to our health and wellbeing.

‘Scenes like these are dangerous, and could easily result in pubs being closed again – which no one wants. We all have a responsibility here. Please, please everybody #keeptheheid.’

Mr Flynn, who represents Aberdeen South, said: ‘A bit scunnered by some of the photos appearing online from the city centre over the weekend.

‘Covid-19 has not gone away – as is evident from the cluster linked to The Hawthorn Bar. Should act as the wake-up call some folk clearly need.’

NHS Grampian tweeted earlier on Monday: ‘We can confirm the number of cases detected in the Aberdeen COVID-19 cluster associated with The Hawthorn Bar now stands at 27.’

SNP MP Stephen Flynn yesterday tweeted two photos he had spotted online of the city centre, where an outbreak took place in The Hawthorn Bar

Retweeting Mr Flynn’s images on Monday morning, Ms Sturgeon described the scenes as ‘dangerous’, warning it could result in the closure of more bars

It added: ‘We aware that many photos have been shared on social media over the weekend of extremely busy bars and venues in Aberdeen.

‘Our Environmental Health colleagues at Aberdeen City Council are in contact with licensees in the city to reiterate the safety rules and regulations. ‘

Dr Emmanuel Okpo, Consultant in Public Health Medicine, said: ‘It is not entirely surprising further cases have been detected. This virus is still circulating in our communities. It poses a risk to all of us.

‘People who have not gone to this bar, or who live in other parts of Grampian, should not assume they are somehow ‘safe’.

‘If you develop the symptoms of COVID-19 – a loss of sense of taste or smell, a fever, or a new, continuous cough, isolate at home & arrange a test.’

The owners said customers who were there on July 26 tested positive but it was confirmed by NHS Grampian they were only showing mild symptoms.

Physical distancing measures were put in place within the pub and contact tracing is being carried out to identify any other potential cases.

Meanwhile, a total of 2,491 patients have died in Scotland after testing positive for Covid-19.

She said 11 of these new cases were in the Grampian area, though she could not say if these were linked to the outbreak in Aberdeen.